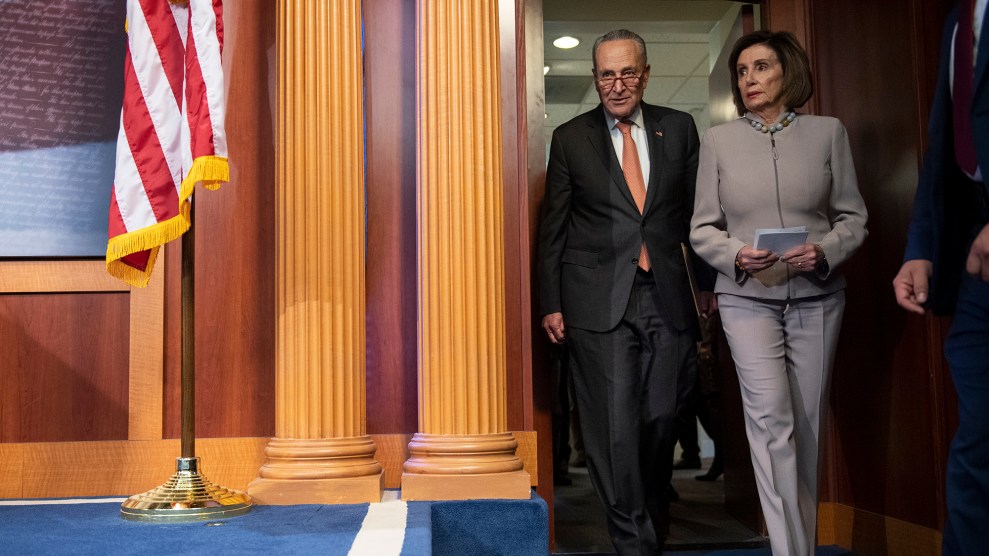 The coronavirus pandemic and the catastrophic unemployment it sparked have put economic policy front and center. To many progressive economists and advocate, the CARES Act, the $2 trillion aid package that moved through Congress last month, put too much emphasis on bailing out corporations and not enough on helping people, especially those who were already struggling before the virus’s spread.

With lawmakers now assembling a second major aid package, the leaders of several progressive economic, research, policy, and advocacy groups released a statement of principles on Thursday urging Congressional leaders to shift priorities to help the most vulnerable, including communities of color. The guidelines laid out are largely targeted at Democrats, whose control of the House of Representatives gives them leverage to shape future bailouts.

“The economic crisis sparked by coronavirus has exposed major structural flaws in our economy that made this crisis far worse than it needed to be,” the statement begins. “It is clearer than ever that we need major government intervention to stabilize the economy and put us on a long-term path to resiliency.”

The statement came out of conversations among the leaders of multiple progressive policy shops about how they could persuade Congress to respond not just with BandAids but with “structural changes.” It also signals a hope Congress will learn from its mistakes in responding to the 2008 financial crisis. “During the last recession, corporations received massive bailouts while continuing the risky behavior that caused the economy to collapse,” the statement reads, still free to act in ways “which made recovery more difficult, particularly in low-income and communities of color.”

As the next package comes together, Democrats are likely to have a long list of demands that includes, as the statement’s authors detail, more aid to people, small businesses, and frontline workers, but also universal mail balloting to preserve Americans’ right to vote during the November elections.

“The economic crisis sparked by coronavirus has exposed major structural flaws in our economy that made this crisis far worse than it needed to be, and it is clearer than ever that we need major government intervention to stabilize the economy and put us on a long-term path to resiliency.

“We urge Congress to move quickly to pass additional legislation adhering to the following principles to prioritize aiding families and communities, especially Black and brown people who are disproportionately harmed by both the public health and economic crises, and making the structural changes needed to make our economy more resilient in the long term.

“Build Economic Resilience for the Long Term. This crisis has laid bare that decades of rampant inequality, attacks on public institutions, and blind faith in markets to solve public problems has left our economy deeply vulnerable. This crisis is acute in part because millions of families lack good jobs and adequate healthcare—especially the Black and brown families and women who are filling what are only now deemed essential roles in our economy—and because government agencies tasked with pulling people from the brink are operating on threadbare budgets. Congress must address the underlying structural weaknesses in our economy that helped propel this crisis and ensure that the investments made now are durable enough to prevent future crises.

“Reinforce essential responders, including workers, small businesses, and state and local governments. This crisis confirms how workers in traditionally low-paid jobs like warehouse workers, grocery clerks, farm workers, and child care workers are—like health care professionals—essential responders. These workers, disproportionately women and people of color, are risking their lives each day, yet lack basic protections to keep them safe and healthy. State and local governments are similarly pushing their resources to the brink to support their residents, and are in desperate need of federal government relief. Half measures to aid those we all rely on most in this crisis will not be sufficient. Congress must provide substantial and sustained relief to state and local governments and directly to all workers on the front lines.

“Repair the Economy by Helping People. This crisis will only be solved by investing in people, first and foremost. Saving our economy from total collapse will require major investments in the health and economic well-being of the workers, small businesses, families and communities who drive our economy, and in order to be effective, must be inclusive of workers who are typically excluded, like restaurant workers, immigrants, and people of color. Instead of hoping that jobs and economic health will trickle down from corporations and the rich, Congress must prioritize getting substantial aid to the people who need it the most.

“Prevent Further Accumulation of Corporate Power. During the last recession, corporations received massive bailouts while continuing the risky behavior that caused the economy to collapse. Corporations, private equity, and payday lenders also moved quickly to profit off of the suffering of millions of families, which made recovery more difficult, particularly in low-income and communities of color. Left unchecked, they will again extract from the public good and exploit marginalized people, which will leave the economy less stable overall — and will likely allow them to concentrate their power as smaller businesses fail. Congress must prioritize shoring up small businesses and institute strong accountability mechanisms and regulations to prevent large corporations from using this moment of crisis to further concentrate economic and political power.”

The statement was signed by the following organizational leaders: