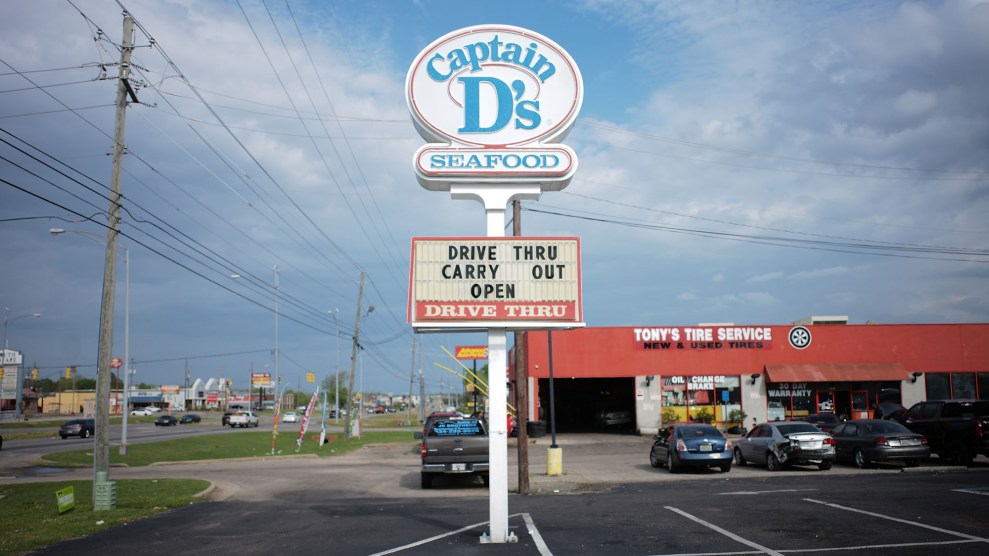 Exterior view of a Captain D's advertising alternate methods of ordering during the coronavirus outbreak on March 23, 2020 in Montgomery, Alabama. Taylor Hil/Getty

Today, as was inevitable, a map from the New York Times made its rounds on Twitter showing where Americans are not staying home (answer: the Southeast) and it was taken wildly out of context—used to more or less say, look at those ignorant Trumpers below the Mason-Dixon line!

My colleague, Kevin Drum, called the map “infuriating” and explained the concentration of continued movement in the South over the past few weeks in this way:

The map doesn’t look this way because people in the South are idiots. It’s almost certainly because they’re conservative and they watch a lot of Fox News. They also listen to President Trump. And Rush Limbaugh. And what they heard was that the coronavirus was “just a bad cold.” That “within a couple of days it’s going to be down to close to zero.” That the hysteria was nothing but a “new hoax” from Democrats who want to bring down the president.

For weeks that’s what they heard. And they believed it. And so they resisted taking it seriously. That’s starting to shift now that Trump and the conservative noise machine have changed their tune, but it’s several weeks too late. What a shameful performance.

While I agree people in the South are not idiots, and that President Trump has whiffed in showing any real leadership during this pandemic—a fact that has real consequences—I respectfully disagree with the broader point here.

For weeks, all over the internet, the message has been “stay home,” “stay the fuck home,” “stay home or you’re a monster who will bring about the apocalypse and the ultimate collapse of human civilization.” Yes, stay home. But what if you can’t?

We don’t often discuss that the ability to stay home is a privilege, one that is a lot more common in places like the Bay Area, where I live. My privilege in this situation is mostly a product of sheer, stupid luck, not some moral high ground, and it is also partly due to the fact that now I live in urban California, in an area where leadership has taken the threat of the virus seriously and where my job can be conducted pretty easily with a laptop and some WiFi—a luxury in and of itself.

My family and many of my friends back home in the South are generally not so fortunate. It doesn’t make them lesser people. And it doesn’t mean they settle into their living rooms at night to watch Fox News, dumbly absorbing whatever nonsense is spat out at them by blonde women with impossible hair or white men with rage etched into their faces. Sure, those people exist—but a whole shit ton of people watch Fox News, and data shows that it’s very much not just in the South. It’s simply unfair to assume that COVID-19 has gained a stronghold there because of conservative propaganda and blind loyalty to Trump. It is because of inequality, poor infrastructure, poverty, food deserts, and a whole host of other reasons, some of them political.

Poor leadership certainly plays a significant role here, and plenty of blame rests with those in power who do take their cues from the president (who takes his cues from Fox News). My colleague Tim Murphy wrote about how the nation’s Trumpiest governors—that “cohort of mini-Trumps,” as he writes—have turned a massive health crisis into a game of politically motivated chicken. And I’ve already written about how Gov. Bill Lee in Tennessee, my home state, has taken absurdly inadequate steps to protect the state. That he only just decided today, Thursday, April 2, to issue a stay-at-home order (previously it was just a “safer-at-home” order) means that my father, who is at a higher risk for severe illness due to the virus, has not been able to “stay the fuck home” without losing his job, which, economically, is not an option for my family. I do not know if this new order even means he will finally get some reprieve. Instead, my father uses the PTO he has to take days off here and there, trying to mitigate his risk, but also lessening the chance of a real vacation after all of this is over.

There are also other reasons for not being able to stay the fuck home beyond the necessity of remaining employed. The Times map getting all the attention is pointing out where people have been driving more than two miles over the past few weeks. But in rural areas, you cannot often just walk a few blocks to a bodega or a grocery store. In my hometown, for example, your options are a Dollar General or a Food Rite—if you need anything that either place does not carry, it means traveling to another county, where groceries are generally cheaper anyway because Wal-Mart. This map from Vox shows where there are populations of people who have no car and no supermarket within a mile. The highlighted areas in this map are pretty similar to the one in the Times. What’s more, these areas are often places that don’t have reliable public transportation, if they have any public transportation at all. 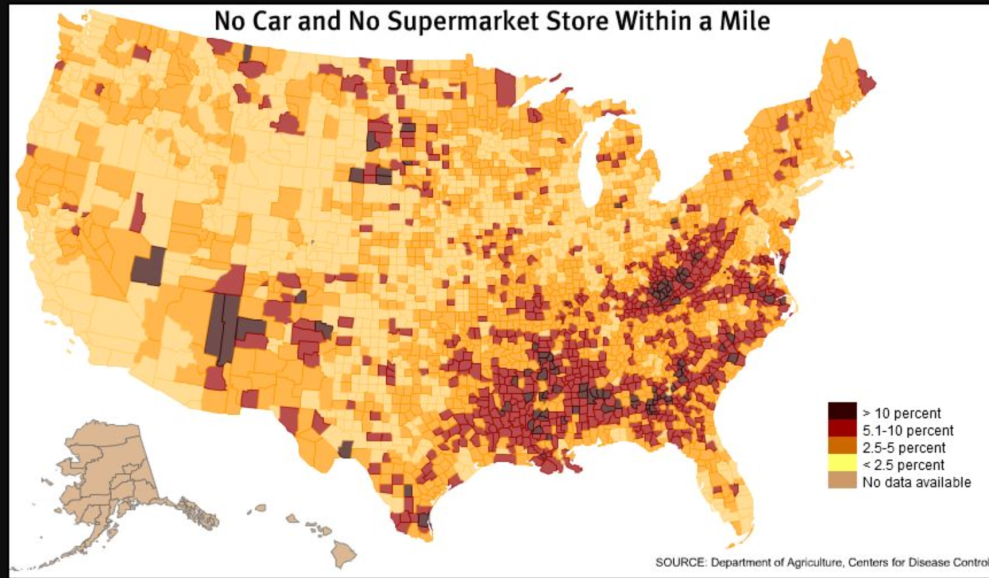 One more point that is crucial to consider: As the Atlantic points out, more young (or younger) people in the South appear to be dying from the coronavirus. This isn’t so surprising when you consider the South has some of the worst health disparities in the country. Again, that cannot be attributed easily to Fox News or the Trump effect; instead, it should be attributed to policy. As Van R. Newkirk II writes:

Health disparities tend to track both race and poverty, and the states in the old domain of Jim Crow have pursued policies that ensure those disparities endure. The South is the poorest region in the country. The poor, black, Latino, or rural residents who make up large shares of southern populations tend to lack access to high-quality doctors and care. According to the State Health Access Data Assistance Center, Mississippi, North Carolina, Texas, Florida, Georgia, and Louisiana all spend less than $25 per person on public health a year, compared to $84 per person in New York. Nine of the 14 states that have refused to expand Medicaid to poor residents under the Affordable Care Act are in the South. And many of those states are led by Republican leaders who have imitated President Donald Trump’s dallying and flip-flopping, and now find themselves flat-footed.

I’m worried about how the South will fare over the next several months and do expect, as Newkirk suggests, the pandemic will take a particularly dire toll in my home region. But this crisis affects all of us, and I know plenty of Southerners (conservatives included) who are taking it seriously.

So, my plea: Beyond remembering our own privilege, something we don’t easily do even in moments like this one, don’t forget those maps you’re sharing out of context, those numbers you’re citing, have long, thick, and twisted roots—and they run much deeper than partisanship.