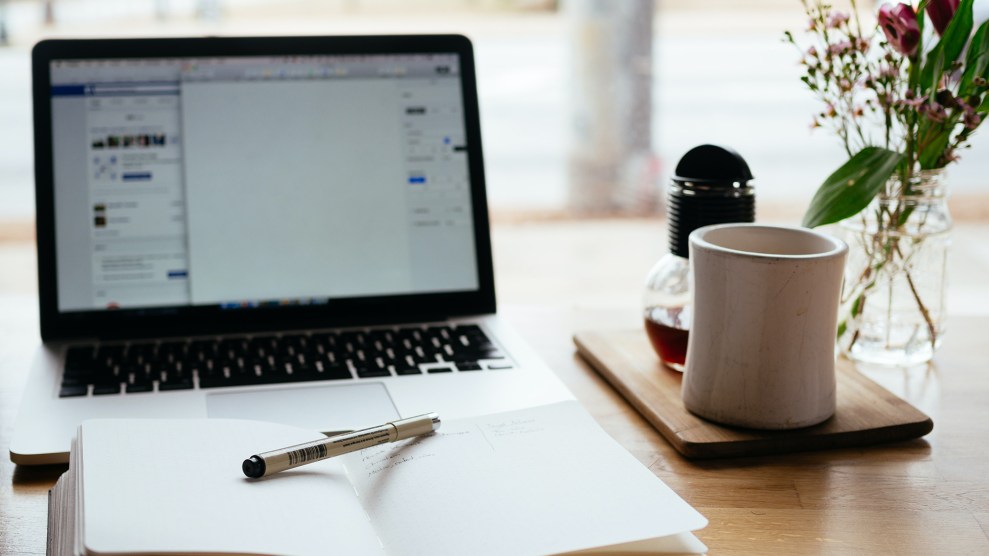 It turns out, living through a pandemic inspires a sweaty pressure to Be Productive while real life is on pause, despite also igniting paralytic existentialism that dulls the mind into a neverending loop of sad, gray fuzz. For my job, I have to keep up with a news cycle that is utter chaos. I have a book to report out and research and write. There are so many bread recipes on the internet right now. (Do not talk to me about how William Shakespeare wrote King Lear in quarantine, you shit-talking performance artist.)

This is how I have fallen into obsessively Googling “#studyblr” and sinking into a comforting scroll through Tumblr blogs that host thousands of images, set against pastel, washed-out backgrounds, that look more or less exactly the same.

There is usually a steaming cup of coffee or matcha in the foreground, or maybe it’s a glass of cold brew coffee with an artful swirl of oat milk, all caffeine is welcome here. The beverage is situated alongside a MacBook that displays either the time or the date in a ridiculously large font or maybe some sort of document. Perhaps there’s an iPad with notes that were carefully created using an app and a stylus (that I cannot fathom using in my day.) Or there’s a notebook, open to a page with notes in impossibly beautiful handwriting—headings and subheadings in calligraphy! Colorful little diagrams that look like they sprang onto the page directly from a textbook designed by and for millennials! Highlighters whose neon hues denote categories! A handful of accessories are carefully arranged—nay, scattered—on the desk: Muji pens, the aforementioned highlighters, AirPods, a plant, maybe. There are little messages urging the reader to remember to hydrate, move, and be gentle with oneself.

Let’s face it, I was already susceptible to this sort of propaganda. I grew up stanning Hermione Granger. I am a devoted user of a very specific notebook brand (dot grid til I die). I have spent my life in search of the perfect pen that I now believe to be, yes, the 0.38 mm gel Muji pen, and I do carry that one Madewell tote. I read The Cut’s “How I Get It Done” series with religious regularity, as if by studying the habits of such women as those profiled on my favorite website, I can absorb them into my much messier state of being and become the sort of person who wakes up at 5 a.m. and sips hot lemon water before doing an hour of yoga and then catching up on emails.

Nowhere has this desire manifested itself more clearly than in my book research in my off-hours. It begins with careful reading and highlighting and note-taking. There is tea; I have lists. But it quickly devolves into my usual scribbles in my notebook and in the margins of academic tomes. My tea, largely forgotten, turns cold, my messy bun begins to increasingly resemble the kind of mess a rodent would feel at home in, and I move back and forth from my ink-stained (yes, I fell asleep on my Muji pen once, but only once!!), tangled bedsheets to my “standing desk”—an old, beat up dresser that is on its second generation of Andrews. I’ll never be #studyblr, and that’s really fine. I know I can’t expect myself to be extremely busy and very productive when I’ve been stuck in my house for more than two months away from the people I love and the routine that I’ve carefully pieced together over the last five years. I know #studyblr is a lie.

And yet. When I’m staring at my blank document and willing words to appear while my deadline ticks closer, immobile with fear that someone I love will get sick or that I will never hug my friends again or that I really was wrong about the whole Christianity thing and I am bound for a deluxe suite in hell, I take to Tumblr, and I pretend that my carefully-penned to-do list and my homemade iced coffee can get me through this. And, oddly enough, sometimes it does.