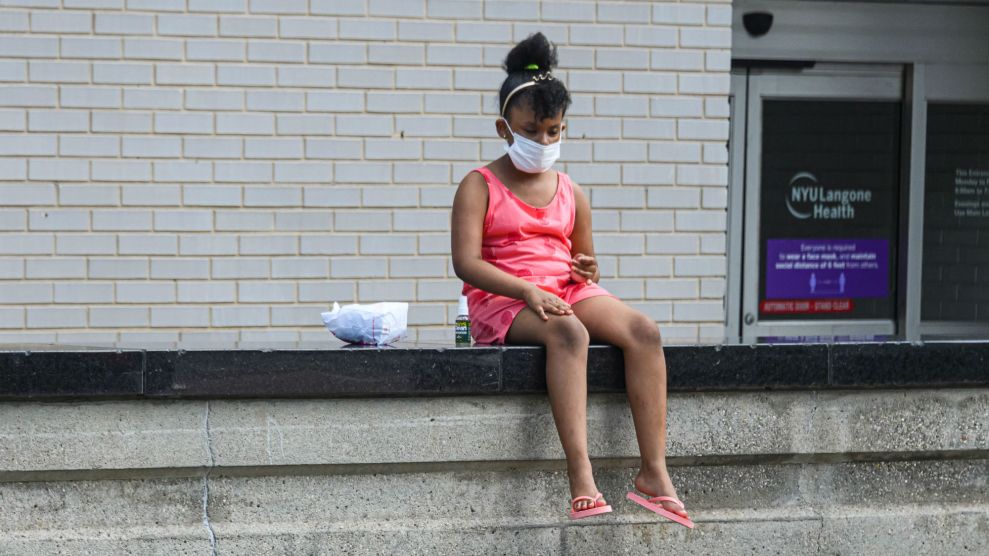 Over the past several months, it’s become abundantly clear that Black and Brown people in this country are at a much higher risk of contracting the coronavirus and dying from COVID-19 than their white counterparts. As my colleagues Edwin Rios and Sinduja Rangarajan have reported in detail, this is because “racism is a preexisting condition”; people of color are more likely to work essential jobs, to be uninsured, and to see higher rates of conditions like asthma and cancer due to disproportionate exposure to environmental hazards like highways and toxic dumping areas near their homes.

Now we have preliminary yet startling new data that reveals similar disparities in children, specifically in the case of MIS-C, a rare inflammatory illness linked to COVID-19.

The first reports of MIS-C, or Multisystem Inflammatory Syndrome in Children, were something of a mystery: In May, doctors in New York reported seeing otherwise healthy children enter the hospital with symptoms like fever, rash, vomiting, and diarrhea. They noted the condition was similar to Kawasaki disease, a decades-old condition that also afflicts children, but in this case, there was a clear coronavirus link: Most of the children tested positive for SARS-CoV-2 or had been infected before.

Shortly after these initial reports came in, the Centers for Disease Control and Prevention began tracking cases of MIS-C across the country. Government researchers have found that the condition is still relatively rare—only a few hundred cases have been reported nationwide—but there appears to be a deep disparity in who is ultimately stricken by the illness: Out of the 342 cases of MIS-C reported to the CDC, according to the CDC-defined categories of race, about 70 percent of cases have been in Hispanic or Latino and non-Hispanic Black children. Only 15 percent of cases have been in non-Hispanic white children. These are extreme differences: Consider that the US child population is reportedly about 50 percent non-Hispanic white, 25 percent Hispanic, and just over 13 percent non-Hispanic Black.

High rates of COVID-19 infection may partially explain why so many Black and Latinx children are later developing MIS-C, though researchers say that is far from certain. “If you look at the population as a whole, exposure to the virus—there is a lot of Black and Hispanic overrepresentation,” says Dr. Adrienne Randolph, an author of a recent CDC-funded nationwide study aimed at better understanding how children are impacted by MIS-C. “It’s hard to know where people are exposed to the virus, but if they’re getting exposed in their home or home community, then that may be why children are getting exposed more and then getting MIS-C more. That’s the assumption. But that has not been proven.”

The CDC echoed this conclusion in an email to Mother Jones, saying, “We can speculate that the disproportionate impact of MIS-C on Black and Hispanic/Latino children and youth is reflective of the disparate exposure to and risk of serious illness from COVID-19 that we’re seeing among Black and Hispanic/Latino adults; however, further research is needed as what we learn about MIS-C continues to evolve.”

Aside from the high rates of exposure to this coronavirus, it’s also possible there’s something in the kids’ environments that make them more vulnerable to MIS-C. For example, Randolph says, Black and Latinx communities see higher rates of asthma due to disproportionate exposure to environmental “triggers” like air pollution.

Randolph, who is also a senior associate in the division of critical care at Boston Children’s Hospital and a professor of anesthesia at Harvard Medical School, and others are currently working to fill in these gaps in our understanding. She is assisting the CDC in designing a study to monitor children who test positive for SARS-CoV-2, to see who does and doesn’t develop MIS-C later on, while tracking factors like race and ethnicity. This won’t fully answer the question of why Black and Latinx children are getting sick at higher rates, she says, but may provide a “little bit of a hint.” The next step, she says, would be to conduct a study in which families are interviewed by researchers to determine what risk factors they may have faced before getting sick. The CDC is currently designing such a study, she says.

As schools move to reopen, she says, researchers will need to be ready to track who is getting infected, where they’re getting infected, and if complications like MIS-C are arising. “It’s important to design studies going forward that would capture the right data to answer those questions,” Randolph says, though she cautions that robust, forward-looking studies can be difficult to carry out.

“It’s a very concerning problem and it really needs to be addressed,” she says about MIS-C. “And we’re trying to get more answers as best we can, but it’s not gonna be an easy question to answer.”

This post has been updated to include the CDC’s response.