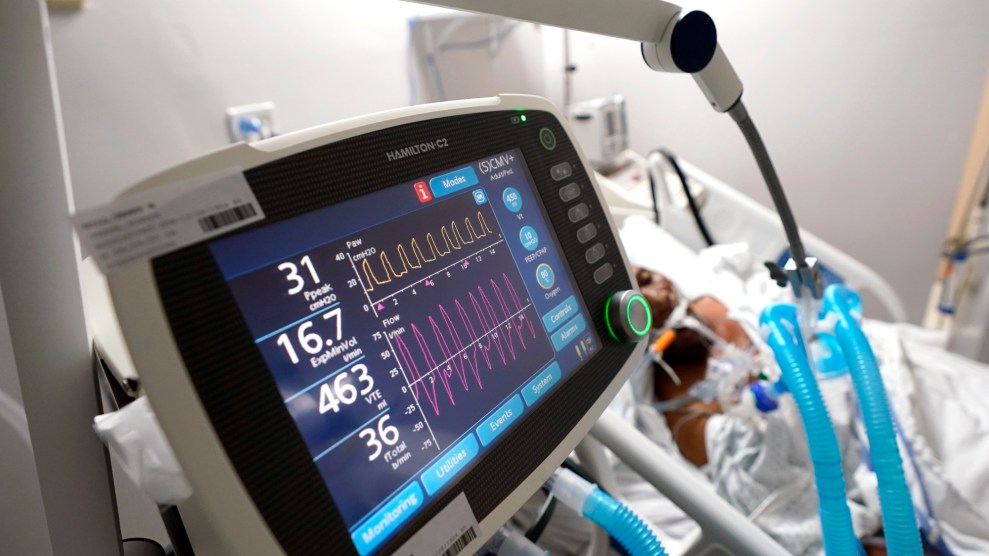 Last week, a small rural county in south Texas went from the poster child for good pandemic response to the entire country’s worst nightmare. In a widely-covered press conference, Starr County Health Authority Jose Vasquez announced that, like many hospitals in Texas’ Rio Grande Valley region, the local hospital had reached capacity for COVID-19 patients and they had adopted a plan to start triaging the sickest patients. While that meant allocating the dwindling ICU beds to patients the most likely to survive treatment, some media outlets across the country sounded the alarm on the soon-to-be-formed “death panel” that would decide which patients would be saved at Starr County Memorial Hospital, and which would be “sent home to die.”

“I don’t want to say everything is OK, but we’re starting to see the light at the end of the tunnel.”

This week, however, things are actually … looking up? (Hold onto that, you won’t get it much in 2020.) In the wake of the media frenzy, Texas Gov. Greg Abbott sent Navy teams to help out hospitals in the Valley, including Starr County’s tiny 29-bed COVID-19 unit. According to Thalia Munoz, the hospital’s CEO and administrator, a hospital in San Antonio, nearly 250 miles away, has allowed them to start transferring patients to their facility. The “death panel” was called off.

“I don’t want to say everything is OK,” Munoz told Mother Jones on Wednesday, “but we’re starting to see the light at the end of the tunnel.”

Still, while the state’s recent response to the dire situation along the Texas border is certainly welcome, some say the situation never should have gotten this dire to begin with. They argue Abbott’s own inaction early in the pandemic, as well as his efforts to reopen the state back in early May—at the expense of local control—was part of what put these communities in this situation in the first place.

Early in the pandemic, numerous advocacy groups and local media outlets warned that places like Starr County were particularly vulnerable to the coronavirus. The Rio Grande Valley’s residents are more than 90 percent Latinx and have one of highest poverty rates in the state; nearly half are uninsured and chronic health conditions abound—the rate of diabetes in the Valley is triple that of the national average, for example. In nearby Hidalgo County, the coronavirus fatality rate is more than twice that of the state’s overall average.

“My concern is not only that it is circulating without our knowledge, but we also have a population at high risk for severe disease,” one epidemiologist told the Texas Tribune in early April. “I don’t think it will take very long at all to overwhelm the facilities at our hospitals.”

“We’re gonna have to keep an eye on some of these outbreaks that we’re seeing in very rural states because the local hospital might be very small, or it might be a quite a long way away from where the population is. So no, nothing is over.”

A few weeks later, I had an eerily prescient conversation with medical ethicist Nancy Berlinger about triage in the hospitals in New York City, then the country’s most severe coronavirus hot spot. “The tremendous effort on the part of governors and hospitals to get ventilators and beds into places where they were needed staved off the need for triage, but that doesn’t mean it won’t happen,” she told me. “Remember, in some parts of the country, where you’re just beginning to see outbreaks, you might have much smaller hospitals. We’re gonna have to keep an eye on some of these outbreaks that we’re seeing in very rural states because the local hospital might be very small, or it might be a quite a long way away from where the population is. So no, nothing is over.”

At Starr County Memorial Hospital, the staff—sans triage committee—is working hard to care for their community. But some damage has already been done. One nurse told me last week’s discussion of “death panels” was a misrepresentation of her on-the-ground reality and disheartening for both frontline workers and residents who, for a myriad of reasons, are already hesitant to seek medical care. She said between the at-risk patient population they worked with and the state’s rush to reopen, medical workers were just doing their best in a worst-case scenario.

Bryn Esplin, a medical ethics expert and professor at the University of North Texas Health Science Center, told me blaming doctors in chronically underfunded and underserved areas misses the mark. “No one wants to decide who lives and who dies,” Esplin said. “It’s an excruciating decision that leads to burn out and moral distress. But these heart-wrenching decisions [almost had] to be made all because of social priorities and structural racism.”