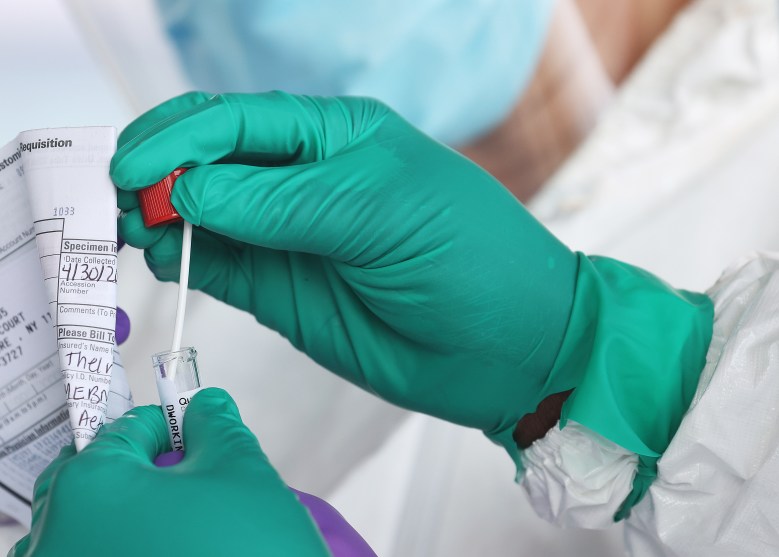 In November, the state of Wyoming announced that it had ceased calling the contacts of people who test positive for COVID-19 to let them know they may have been exposed to the virus. Instead, it asked Wyomingites to do it themselves. Health officials from some counties and tribes have continued their own contact-tracing programs, however—and, with the state’s resources stretched thin, that patchwork of local coverage remains key to supporting Wyoming communities.

About six weeks before the announcement, the number of COVID-19 cases in Wyoming began to spike. The state saw just a few dozen new cases a day throughout the spring and summer, but by late November, there were multiple days with more than 1,000 new cases. Surges in hospitalizations and deaths soon followed. With only around 130 public health workers available to make calls statewide, the state had to triage its efforts. It chose to focus on calling people who test positive, but it no longer attempted to notify their close contacts.

As a result, groups like Teton County’s contact tracing team—comprising two dozen County Health Department employees and volunteers—are the state’s remaining contact tracers. When the group started contact tracing, in March, the caseload felt manageable. By late November, it had become overwhelming. “There is no break,” said Andi Gordon, Teton County’s COVID-19 lead case coordinator. But the team remains dedicated to trying to curb the virus’ spread—and keep the community united. “We’re trying to hold on so strongly to that personal touch. I want to keep calling people, because I think people really value that.”

“We’re trying to hold on so strongly to that personal touch. I want to keep calling people, because I think people really value that.”

On the ground, contact tracers are making vital connections between local residents and community resources. Erin Engavo-Munnell, the COVID coordinator at Eastern Shoshone Tribal Health on the Wind River Reservation, said that she and her team are able to connect with their neighbors in a way people outside the area may not be able to. (The state has contracted with a company called Waller Hall to help with case investigations, but its employees largely call from outside Wyoming.) “All three of us who do contact tracing are enrolled members, and members of the local community —people are more likely to talk to us and give us information, and be more open,” said Engavo-Munnell. She also tells people about services that can deliver food and cleaning supplies to them while they’re in quarantine, whether they live on the reservation or not.

In Teton County, Gordon’s team is so well-connected that they frequently end up calling people they know. “It’s a small community,” she said. “We say to the team, ‘If you think it’s going to facilitate the work, go for it, but if you think it’s going to complicate it, recuse yourself.’ It happens a lot.” The team has also facilitated some on-the-fly problem solving. For instance, they realized that COVID-positive people often weren’t able to get home from the hospital. “There wasn’t anyone to drive them. Who’s going to drive a COVID-positive person?” said Gordon.

Ultimately, local firefighters and EMTs pitched in, as did the police department, which used sheriff’s vans with enclosed cabs to transport people. The team also enlisted the local sheriff’s office to help pick up and deliver prescriptions to quarantining residents.

The borders between reservations and counties are permeable, however, and that can complicate the tasks these small teams are doing to try to control the spread of COVID-19 in their communities. Sometimes, said Gordon, they’ll call someone only to discover they’ve already traveled somewhere, if only as far as the next county. That means more potential exposures, and more calls for the team. The Wind River Reservation is surrounded by Fremont and Hot Springs counties, so people often end up traveling through it. In the initial weeks of the pandemic, while Fremont County clinics limited testing amid staffing and supply shortages, the Wind River Reservation offered testing to any local residents, enrolled tribal members or not.

Meanwhile, other areas, inundated by new cases, have handed off all calls to the state—which means only COVID-positive people are being contacted. Fremont County’s nurse manager, Becky Parkins, confirmed in mid-December that the county is no longer contact tracing. (She declined to answer further questions, noting that she was focused on facilitating the county’s imminent rollout of the COVID-19 vaccine.) Without tracing, there are fewer opportunities to stop the chain of viral transmission; even though Wyomingites are asked to call their contacts, illness or stigma may prevent them from doing so. It also masks the extent of community spread—and that can make people less concerned about the virus and less willing to take precautions.

New cases started to decline in December, and Clay Van Houten, the Wyoming Department of Health’s infectious disease epidemiology unit manager, said that the state will monitor COVID-19 numbers to determine whether it can resume contact tracing. “It will depend on what we see over the next few weeks,” Van Houten said in mid-December. One option is to contact trace on a case-by-case basis to maximize resources. “If we can identify clear exposure for folks, or clear exposures for others to the case, then it makes sense to do more intense contact tracing,” he said.

Meanwhile, local contact tracers continue calling, and calling, and calling. “While sometimes it feels like we’re just drowning, at the same time, I always want to keep in mind that every person we do get ahold of is one person we have been able to make a difference with,” said Janet Garland, Teton County Health Department’s nurse manager. “If we don’t get to everybody on the list today, they’ll be there tomorrow—and we’ve made a difference for those folks we got to today.”