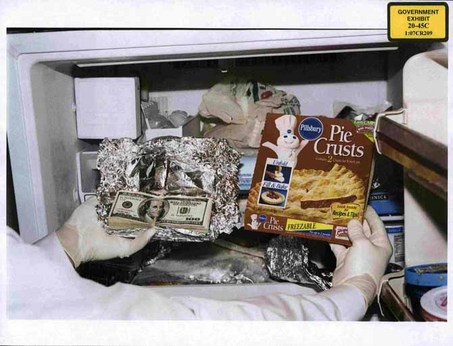 Used under a Creative Commons license from Flickr user alangutierrezz

Yesterday, former Louisiana Congressman William Jefferson was convicted by a Virginia federal judge for 11 criminal counts including bribery, racketeering, money laundering, and wire fraud. (He was acquitted on five counts including obstruction of justice and violating the Foreign Corrupt Practices Act.)

In commemoration of the judge’s decision, let’s take a moment to note the top five similarities between William Jefferson and American founding father Thomas Jefferson.

Thomas Jefferson: Was the man behind the Louisiana Purchase.

William Jefferson: Was the man behind many Louisiana purchases.

William Jefferson: Stored food and cash in a freezer.

Thomas Jefferson: Supported the virtues of the yeoman farmer.

William Jefferson: Grew up on a yeoman farm.

William Jefferson: Developed strong relationships in Africa which led to his personal ventures in Nigeria, Ghana and Equatorial Guinea.

Thomas Jefferson: Supported the will of the people after the French Revolution.

William Jefferson: Supported by the will of the people through his brilliant political machine.