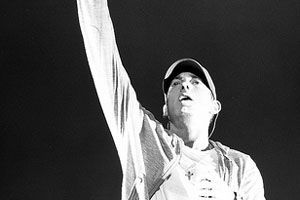 Was anyone else aware that Eminem recently performed a song at the AMA’s in which he bragged about 17 rapes? I just found this out while reading the comments section of an Entertainment Weekly blog. Meanwhile, Adam Lambert has been pitchforked by the public and blackballed by ABC for (gasp!) kissing a guy on the same show. Because, you know, that’s offensive.

Coincidentally, hours before reading about Slim Shady’s rape boast, I came across a Center for Investigative Reporting report about how college campuses routinely mishandle sexual assault cases. Apparently, more than 95 percent of students who are sexually victimized do not report to police or campus officials, and those that do are often encouraged to drop their claim or submit to a gag order.

It’s hard enough as is to report sexual abuse. Victims shouldn’t have to deal with Eminem’s brags, ABC’s hypocrisy, campus’ injustices, or a culture that just says “meh.”