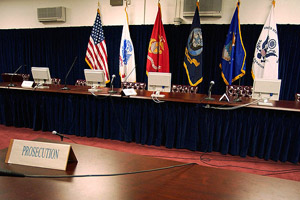 Last week, there was a pre-trial military commission hearing for Omar Khadr, a Guantanamo detainee who’s been in custody since his early teens. An observer for Amnesty International was there to report this crazy bit:

The most damning testimony at today’s hearing came when the defense asked Interrogator #1 directly if he had ever threatened the 15-year-old with rape if he did not cooperate. In his affidavit, Omar Khadr had alleged that

“On several occasions at Bagram, interrogators threatened to have me raped, or sent to other countries like Egypt, Syria, Jordan or Israel to be raped”.

Interrogator #1 responded that he had told the teenager a “fictitious story” about a young Afghan who had lied and been sent to a US prison where “big black guys and big Nazis” noticed “this little Muslim” and, in their patriotic rage over the 9/11 attacks, the “poor little kid” was raped in the shower and died.

I should start a subcategory of posts called “Things I read on the Internet that make me involuntarily take the Lord’s name in vain out loud.” Seems like there are so many levels of laws being broken here, habeas corpus aside: Holding a minor as an adult prisoner, threatening a prisoner with rape, threatening a minor prisoner with rape. Indeed, doesn’t that excerpt read like a transcript from the prosecution of an interrogator? Oh yeah, right. We don’t really do that.