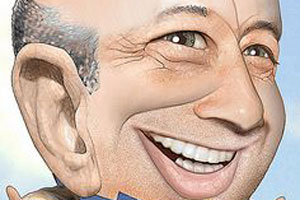 [UPDATE]: Earlier, I wrote about rumblings that Goldman Sachs CEO and chairman Lloyd Blankfein could be on his way out if Goldman decides to settle the Securities and Exchange Commission’s fraud suit against the firm. Blankfein, however, isn’t going down without a fight. Today, in a massive vote of confidence, Goldman’s shareholders voted against splitting the firm’s CEO and board chairman roles; for now, Blankfein remains the undisputed leader of the firm. “I have no current plan to step down,” Blankfein told shareholders. Today’s vote is sure to boost Blankfein’s, um, stock, and should dampen calls for his ouster.

The Wall Street Journal reports today that besieged investment firm Goldman Sachs and the Securities and Exchange Commission have held early settlement talks to end the SEC’s blockbuster civil suit. That’s a big step away from the firm’s initial reaction to the suit, saying it was completely false. The securities regulator filed suit against Goldman for allegedly misleading its clients about a complicated financial product that the SEC says was designed to fail. Moreover, the SEC claims Goldman failed to disclose that a trader betting against that product, a synthetic collateralized debt obligation named Abacus, played a large role in designing the product and ensuring its demise. Kind of like allowing a guy help build a house out of pure kindling, then letting him buy fire insurance against the sure-to-burn house and wait to collect his payout. Ultimately, the trader “shorting,” or betting against, Goldman’s Abacus, a hedge fund guru named John Paulson, made $1 billion in the deal, while investors who thought Abacus would succeed lost around $1 billion.

The settlement talks are in the very early stages, the Journal reports, and right now there’s a sizeable gulf between the two parties’ positions. One fund manager, Michael Mayo, suggested that if Goldman did indeed settle, the settlement figure could reach $1 billion—not much compared to the firm’s $850 billion balance sheet, but a symbolic blow nonetheless. Even more jarring would be the forced departure of Goldman CEO and chairman Lloyd Blankfein. There’ve been rumblings that any settlement agreement would involve ousting Blankfein, the man at the helm during the go-go subprime years, the firm’s decision to short the housing markets, and the 2008 collapse. Blankfein was also running the firm when the Abacus deal went down, in 2007.

It would undoubtedly be a blow to Goldman to lose Blankfein, a long-time trader and executive in the firm and the man who’s lead Goldman through arguably the bleakest period in its history. But if the firm is to move past the tumult of the last two or three years, odds are you’ll see Blankfein packing his bags.