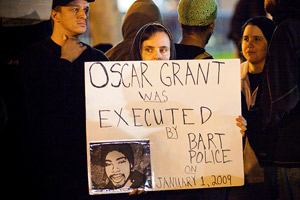 Last week, Kevin Drum wrote about Johannes Mehserle, the white former transit cop who was convicted of involuntary manslaughter for shooting and killing an unarmed black man, Oscar Grant, who was lying face down and handcuffed. Elizabeth Gettelman covered the post-verdict headlines which focused on looting committed by 49 out-of-town recreational anarchists and detracted from the cause of initially peaceful protests. Incidentally, Mehserle’s five-years max sentence, with a chance of added time, is especially confusing considering that last year a California man convicted of growing marijuana was sentenced to a minimum of 10 years in federal prison. But almost more puzzling is how often unarmed men are shot by police officers in this country and the reasons given and accepted for the violence. More on that after the jump.

After Rodney King was beaten by Los Angeles police officers in 1991, a panel investigating excessive use of force by the LAPD found that officers operated under “an organizational culture that emphasizes crime control over crime prevention and that isolates the police from the communities and the people they serve.” As a result, police violence and racism stems from this culture which teaches “to command and confront, not to communicate,” the report said. These findings were echoed in the book Above the Law: Police and the Excessive Use of Force. In it, UC Berkeley law professor Jerome Skolnick and former New York City police officer/Temple University criminal justice professor James Fyfe say that police work is often viewed by those in the force as an us-versus-them war rather than a chance for community-oriented engagement and problem solving. The authors also point to a lack of accountability as one of the reasons why police violence persists. They acknowledge that, yes, police officers are placed in dangerous situations that at times require immediate responses. But they maintain that that doesn’t excuse using more force than is needed to subdue someone, the lack of professional training that leads to such fear-based responses, or treating citizens as enemy combatants. As expected, the Mehserle-Grant case has some people questioning the tactics used by and training given to police officers. A Facebook group calling for the disarmament of BART cops has even emerged in the verdict’s wake. Fueling these calls for police reform are several cases in recent years where unarmed civilians have died at the hands of those badged to protect and serve. Here’s a rundown, along with a few memorable shootings from the past decade or so:

1999: “It looks like one guy may have panicked and the rest followed suit,” a police official told The New York Times after the fatal shooting of 22-year-old Amadou Ahmed Diallo, a Guinnea-Bissau immigrant who was killed when four white New York police officers in plain clothes fired 41 shots at him, 19 of which hit his body. The officers said they thought Diallo was reaching for a gun when they shot him in the doorway of his apartment. Turns out it was his wallet. During the trial, the officers admitted that they never considered the situation (four strangers in an unmarked car with guns approaching a guy on his stoop at night) from Diallo’s point of view. They were acquitted of all charges.

2003: While surrendering on his knees in front of four Las Vegas police officers, Orlando Barlow is shot with an assault rifle by officer Brian Hartman from 50 feet away. Hartman argued that he feared Barlow was feigning surrender and about to grab a gun. Barlow was unarmed; a  jury ruled the fatal shooting was “excusable.” Hartman later resigned from the force a month before a federal probe uncovered that he and other officers printed T-Shirts labeled “BDRT” which stood for “Baby’s Daddy Removal Team” and “Big Dogs Run Together.” The probe also found that Hartman and other officers had used excessive force during two separate investigations and lied about it. Their punishment: the possibility of losing their jobs, The Las Vegas Sun reports.

2006:  Just hours before his wedding, 23-year-old Sean Bell leaves the strip club hosting his bachelor party, jumps into a car with two friends, and is killed when police fire 50 shots into his vehicle, wounding his friends. Police say they opened fire after Bell rammed his car into an unmarked police van filled with plainclothes officers. They say they followed Bell and his friends outside the club suspecting that one person in their group had a gun. Referring to Bell and his friends, Mayor Bloomberg told the Associated Press “there is no evidence that they did anything wrong.” A judge acquitted the officers of all charges in 2008. A federal civil rights claim filed by Bell’s widow is set for this month.

January 1: On New Years morning, three Bay Area Rapid Transit officers pull 22-year-old Oscar Grant and four other black men off a train in Oakland. You can view what happened afterwards in this Youtube video. In it, now former-transit officer Mehserle can be seen shooting Grant in the back. During the trial, Mehserle argued that he thought Grant was reaching for a gun near his waistband. To stop this from happening, Mehserle said he intended to Tase him, but shot him with a pistol instead. A judge will deliver his sentence in August. And the US Department of Justice is investigating the case.

June 10: Niles Meservey, 51, tries to drive away from a Washington state restaurant, but he’s drunk. Officers are called to the restaurant parking lot to intervene. They block Meservey’s car with their vehicles, shoot him with a Taser, and his car lurches forward. At that point, Officer Troy Meade fires seven shots with his handgun into Meservey’s back, killing him. Jurors find Meade not guilty of second-degree murder and first-degree manslaughter, while also finding that he didn’t act in self-defense. He will not spend time in jail.

January 29: Portland police officers get a call to check on a suicidal and armed man at an apartment complex. Aaron Campbell, 25, comes out of the apartment walking backward toward police with his hands over his head. The Oregonian reports that police say Campbell ignored their orders to put his hands up. At which point one officer fired six bean bag shots at his back. Witnesses say they saw Campbell reach his arm around his back, where the beanbag struck him. Officer Ronald Frashour says he saw Campbell reach both hands around his waistband to get a gun, and so he shot Campbell in the back with an assault rifle. “We feel that his death resulted from flawed police policies, incomplete or inappropriate training, incomplete communication and other issues with the police effort,” a jury wrote after charging the police officer with no criminal wrongdoing.

January 10: Porterville, Calif. police officers shoot and kill Victor Steen after stopping him for a traffic violation he committed while riding his bike. Officers say they struggled with Sheen, Tasing him, and chasing him to his mother’s house where they broke down the door and the altercation continued, until they shot him. The officers were cleared of any wrongdoing.

March 20: After hearing a loud sound, Los Angeles police officers Allan Corrales and George Diego turn their marked car around and see Steven Eugene Washington, 27, walking down the street while looking around and touching something near his waist. The officers say something to Washington. He then approaches them while seemingly removing something from his waistband. Thinking Washington is armed, they fire. One bullet strikes Washington in the head, killing him. Soon afterward, his family announce that Washington was autistic, had learning disabilities, and was generally afraid of strangers. His mom filed a claim for damages with no word yet on whether a lawsuit will follow. The officers have not been charged with a crime.

June 5: Tyrone Brown, a 32-year-old former Marine from East Baltimore, is shot 12 times in a crowded bar after an off-duty Baltimore police officer fires 13 rounds at him for groping one of the officer’s lady friend’s. That officer, Gahiji Tshamba, was indicted for murder yesterday and faces a maximum life in prison charge if convicted. His attorney had argued that Tshamba “did what he had to do.”

Know of other recent or seminal cases? Feel free to add them in the comments section below.