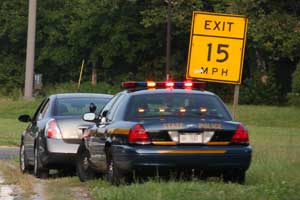 A new report from the left-leaning American Constitution Society presents a not-so-new proposal: Local and state governments that are strapped for cash should reclassify certain misdemeanors as non-criminal infractions. Robert Boruchowitz, a Seattle University law professor and the report’s author, writes that it could save the nation’s indigent defense system “hundreds of millions, perhaps more than $1 billion per year.”

The easiest place to start, Boruchowitz says, may be to ease up on poor people caught driving with licenses that were suspended for outstanding traffic fines. Also on his list are pot possessors, dog leash violators, homeless-feeders, and—a suggestion that could have saved me a headache back in college—minors in possession of alcohol.

It makes you wonder: If the benefits are so obvious, why haven’t more places already changed their laws?

Boruchowitz figures that two reasons are administrative costs and, naturally, drug-war politics. But he focuses most of his attention on programs that could serve as models for other communities. In Spokane, Washington, for instance, a new diversion program for suspended-license violators has its city prosecutor predicting a 35-percent drop in criminal charges, freeing up the court system and keeping the fine money coming.

A billion dollars nationally isn’t a whole lot of money, relatively speaking. California alone is facing a $28 billion budget deficit. But every little bit counts, and Boruchowitz’s suggestions could allow attorneys to go after more serious crimes and help keep poor people out of jail. The proposed changes might also combat racial disparities in punishment by allowing localities to ease up on crimes that are disproportionately enforced against minorities.

In January, California will provide another example for Boruchowitz to study, thanks to a bill signed in September that will reduce possession of small amounts of pot from a misdemeanor to a non-criminal infraction.