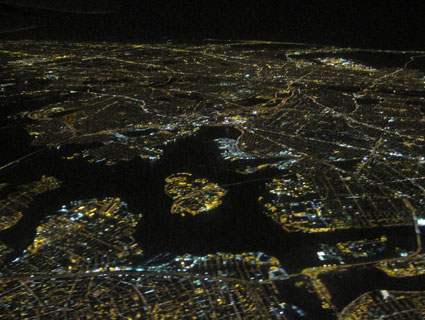 “We are not evacuating Rikers Island,” Mayor Michael Bloomberg said in a news conference Friday. Bloomberg annouced a host of extreme measures being taken by New York City in preparation for the arrival of Hurricane Irene, including a shutdown of the public transit system and the unprecedented mandatory evacuation of some 250,000 people from low-lying areas. But in response to a reporter’s question, the mayor stated in no uncertain terms (and with a hint of annoyance) that one group of New Yorkers on vulnerable ground will be staying put.

New York City is surrounded by small islands and barrier beaches, and a glance at the city’s evacuation map reveals all of them to be in Zone A (already under a mandatory evacuation order) or Zone B–all, that is, save one. Rikers Island, which lies in the waters between Queens and the Bronx, is not highlighted at all, meaning it is not to be evacuated under any circumstances.

According to the New York City Department of Correction’s website, more than three-quarters of Rikers Island’s 400 acres are built on landfill–which is generally thought to be more vulnerable to natural disasters. Its 10 jails have a capacity of close to 17,000 inmates, and normally house at least 12,000, including juveniles and large numbers of prisoners with mental illness—not to mention pretrial detainees who have yet to be convicted of any crime. There are also hundreds of corrections officers at work on the island.

We were not able to reach anyone at the DOC for comment, but the New York Times‘s City Room blog reported: “According to the city’s Department of Correction, no hypothetical evacuation plan for the roughly 12,000 inmates that the facility may house on a given day even exists. Contingencies do exist for smaller-scale relocations from one facility to another.”

Irene is forecast to weaken somewhat by the time it hits New York. But for a warning of what can happen to prisoners during a hurricane, we need only look back at Katrina and the horrific conditions endured by inmates at Orleans Parish Prison in New Orleans. According to a report produced by the ACLU:

[A] culture of neglect was evident in the days before Katrina, when the sheriff declared that the prisoners would remain “where they belong,” despite the mayor’s decision to declare the city’s first-ever mandatory evacuation. OPP even accepted prisoners, including juveniles as young as 10, from other facilities to ride out the storm.

As floodwaters rose in the OPP buildings, power was lost, and entire buildings were plunged into darkness. Deputies left their posts wholesale, leaving behind prisoners in locked cells, some standing in sewage-tainted water up to their chests …

Prisoners went days without food, water and ventilation, and deputies admit that they received no emergency training and were entirely unaware of any evacuation plan. Even some prison guards were left locked in at their posts to fend for themselves, unable to provide assistance to prisoners in need.

Update: In a press conference held on Saturday night, Mayor Bloomberg defended his decision not to evacuate Rikers, saying “It is higher than the Zone A areas and it’s perfectly safe.” Representatives of the mayor made further statements to New York Magazine (see update at end) and the Wall Street Journal, also specifying that no part of Rikers Island is in Zone A. Deputy Mayor Howard Wolfson went on Twitter to say the same thing. The mayor’s office did not clarify what zone, if any, Rikers Island is in, and did not comment on the reported lack of an evacuation plan for the jail.

The Center for Constitutional Rights also issued a statement on Saturday, and CCR spokesperson Jen Nessel said: “The maps I’ve seen all leave Rikers off the Zone scale, but even if it isn’t in Zone A where the mandatory evacuations are taking place, the fact that the Department of Corrections admitted there wasn’t even a hypothetical plan for 12,000 people who can’t exactly evacuate themselves if the situation worsens is disturbing.”