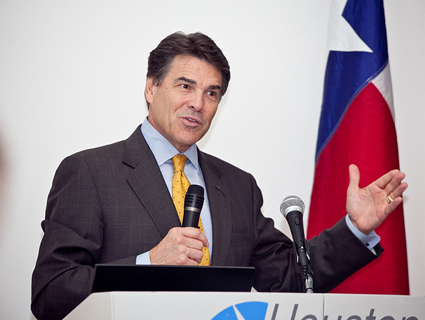 The United States Supreme Court intervened at the eleventh hour to halt the scheduled execution of Duane Buck on Thursday, a rare move that will put the controversial execution on hold indefinitely until the justices can properly review Buck’s petition for clemency. The Texas Board of Pardons and Paroles rejected a clemency petition from Buck’s attorney on Monday, and petitions to Governor Rick Perry (and his deputy, Lt. Gov. David Dewhurst) to grant a 30-day reprieve to re-evaluate the sentence went unanswered. Buck’s attorneys filed a writ of certiori with the Supreme Court on Wednesday. (The order came about two hours after the execution window opened at 7 p.m. eastern time; as CNN reported, Buck had already eaten what was supposed to be his last meal.)

For Perry, the front-runner for the GOP presidential nomination, the decision threatens to reinject not just the issue of capital punishment, but also race into a campaign that in recent weeks has grown more contentious.

Buck was convicted in 1997 on two counts of murder after a shooting rampage at his ex-girlfriend’s apartment. The case, which we’ve written about in more detail previously, is somewhat unusual in that Buck’s guilt is not a point of contention by anyone (Buck included). The issue instead is whether his race (he’s black) played a role in obtaining the capital punishment sentence. At Buck’s trial, a psychologist summoned by the defense went on to testify, under cross-examination, that Buck’s race made him more likely to commit violent acts in the future. To obtain a death penalty sentence in Texas prosecutors must prove a level of “future dangerousness,” and the psychologist’s testimony (although not its specifics) were cited in the prosecution’s closing arguments.

When a similar case, brought by Argentinian Hugo Saldano, came before the Supreme Court in 2000, a much different group of justices ruled that the sentence was unconstitutional as it amounted to race-based discrimination. That led Sen. John Cornyn (R-Texas), then the state’s attorney general, to re-examine past cases in which the same psychologist had been summoned and cited race as evidence of future dangerousness. Cornyn found six cases that matched the description—and Buck’s is the only one of those six that has not received a re-trial. Cornyn stated at the time that the case had been “improperly decided.” Last week, one of the former prosecutors in the case wrote to Perry asking him to commute the death sentence.

It’s unclear how the Supreme Court may rule on Buck’s petition; at this stage, simply the stay itself can be seen as a victory of sorts. Perry has presided over 234 executions as governor, a modern-day record, including 11 this year alone. He has commuted 31 sentences, but 30 of those came only after intervention by the Supreme Court, in cases involving the execution of minors and the mentally handicapped. And in at least one case, the 2004 execution of Cameron Todd Willingham, he ignored compelling evidence that the state had sentenced an innocent man to die.