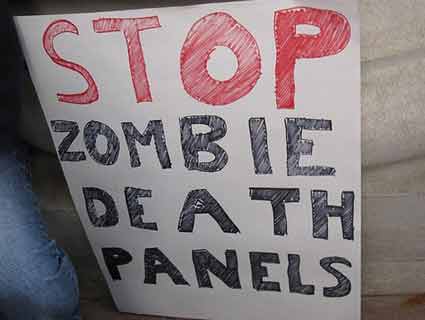 Reuters’ Mark Hosenball has an amazing story about the process by which US citizens suspected of terrorism are placed on the government’s secret “kill list.” (The list famously included extremist cleric Anwar al-Awlaki before he was killed in Yemen.) Hosenball received two basic narratives about how the process works, one in which the president has to personally approve someone being placed on the list, and one in which someone is removed from the list only if the president objects:

They said targeting recommendations are drawn up by a committee of mid-level National Security Council and agency officials. Their recommendations are then sent to the panel of NSC “principals,” meaning Cabinet secretaries and intelligence unit chiefs, for approval. The panel of principals could have different memberships when considering different operational issues, they said.

Hosenball also goes through the case for killing Awlaki—that is, the evidence that he was involved in al-Qaeda in the Arabian Peninsula’s actual operations rather than merely attempting to “inspire” terrorism through extremist rhetoric and exhortations to kill Americans. Awlaki is contrasted with American-born al-Qaeda propagandist Adam Gadahan, who Hosenball says isn’t on the list because he is “regarded as a loudmouth not directly involved in plotting attacks.”

The irony, perhaps, is that mere “loudmouth” Gadahn, has been indicted for treason, a crime punishable by death, while Awlaki was killed without even being indicted. Gadahn is also hiding somewhere in Pakistan, as unreachable by traditional law enforcement as Awlaki but far closer to an actual battlefield in which U.S. forces are engaged. Hosenball writes that “officials acknowledged that some of the intelligence purporting to show Awlaki’s hands-on role in plotting attacks was patchy.” But not so patchy that you wouldn’t just go ahead and kill the guy.

During the debate over the Affordable Care Act, Sarah Palin (who finally announced on Wednesday that she is not running for president) memorably accused the administration of trying to institute “death panels” through which “bureaucrats can decide, based on a subjective judgment of their “level of productivity in society,” whether [her family] are worthy of health care.” This was completely false, and it won Politfact’s “Lie of the Year” award in 2009, but some Republicans ran with the idea anyway. The best part? The “death panel” provision actually dealt with counseling meant to prevent someone other than the individual from making end-of-life decisions about medical care. And a Republican Senator came up with the idea.

Turns out you can get both death panels and something approaching the nirvana of centrist, bipartisan consensus, as long as the death panel is staffed by “mid-level” NSC officials and not folks at Health and Human Services. Because that would be disturbing.