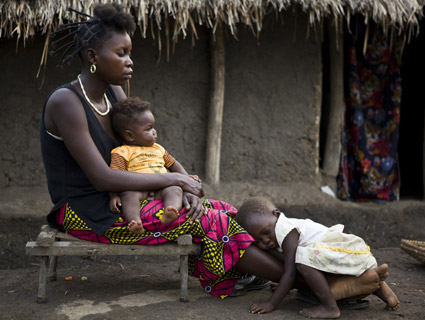 “These forces will act as advisors to partner forces that have the goal of removing from the battlefield Joseph Kony and other senior leadership of the LRA,” Obama said in a letter addressed to Speaker of the House John Boehner.

US soldiers will have a limited role in the operation—they are there to give “information, advice, and assistance,” and are not to engage in combat unless it’s necessary for self-defense.

This move comes a little over a year after Obama signed the Lord’s Resistance Army (LRA) Disarmament and Northern Uganda Recovery Act, a bill promising that the US would do more to end the violent rule of Kony and the LRA in parts of Uganda, South Sudan, the Central African Republic, and the Democratic Republic of Congo.

What makes Kony such a target? Though a far less visible international figure than, say, Muammar Gaddafi, he’s the top leader of the Lord’s Resistance Army and one of the world’s six most-feared war criminals. His guerrilla army has a track record of violent human rights violations that include killing or kidnapping at least 6,000 people and displacing around 400,000 in just the past three years. Started in Uganda, it has been operating since 1987.

The LRA is also notorious for forcing kidnapped children to become child soldiers and using rape as a war tactic. Over the past two decades, Kony has enlisted an estimated 25,000 child soldiers from Northen Uganda.

“The Lord’s Resistance Army preys on civilians—killing, raping, and mutilating the people of central Africa; stealing and brutalizing their children; and displacing hundreds of thousands of people,” Obama wrote in a statement released in May 2010 after he signed the aforementioned bill. “We must all renew our commitments…to support efforts to bring the LRA leadership to justice.”

A year later, Obama has taken a step to fulfill his promise.