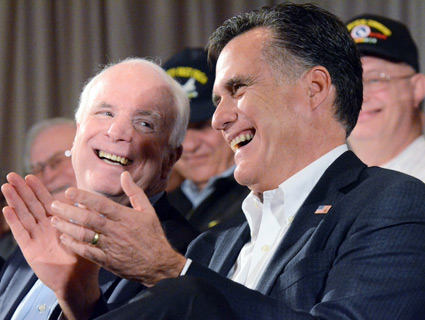 John McCain and Mitt Romney in 2012. Most likely not discussing the former's oppo file from 2008.Jay Carr/The Island Packet/ZUMA Press

In the flurry of tidbits that were pulled from the 2008 McCain campaign’s oppo research on Mitt Romney (rediscovered and posted by BuzzFeed on Tuesday night), a familiar narrative takes hold: Romney is a compulsive flip-flopper who says and does weird, out-of-touch things.

In the chapter of the oppo book labeled “Terrorism,” the McCain campaign paints one-time rival Romney as soft on Al Qaeda. One way of doing this was, apparently, to highlight Romney’s bizarre post-9/11 priorities. As you probably could have guessed, the real “gotcha” moment of chapter is the (by now old) news of Romney saying in April 2007 that it would not be “worth moving heaven and earth, spending billions of dollars just trying to catch [Osama bin Laden].” But on page 78, the ’08 McCain researchers target Romney’s emphasis on a very different kind of terrorism—animal rights extremism:

After hijacked jetliners smashed into the World Trade Center towers and the Pentagon on Sept. 11, Utahns began openly wondering if the 2002 Winter Games might become a target of Islamic terrorists. But Salt Lake Organizing Committee President Mitt Romney, in a meeting with the Deseret News shortly after the attacks, downplayed any threat posed by Osama bin Laden, explaining instead that the real threat of terrorism against the Winter Olympics lay with home-grown terrorists acting under the flag of animal rights.

That passage was taken from the opening lines of a story published in Salt Lake City’s the Deseret News in mid-November 2001. Deprived of context, the quote does make Romney look naïve, dismissive, and insensitive—and just two months after the 9/11 attacks!

Of course, oppo books churned out during primary season aren’t particularly renowned for their commitment to context.

Here are a few of the following paragraphs from that Deseret News story:

When questioned about the statement recently, however, Romney backtracked somewhat, saying security officials were concerned only that animal rights activists and others might disrupt the Games through violent protests similar to those in Seattle and more recently in Geneva and other cities during global conferences of the World Trade Organization.

His source for that concern? Web sites that encourage protesters to come to Salt Lake City and use the Games as a political forum.

Okay, so this article arguably includes yet another Romney flip-flop (albeit, a minor one at best). But taken with the full context, Romney doesn’t appear to be downgrading the security concerns of a freshly post-9/11 America at all; the guy was merely (over)reacting to online message boards. Still, the then future GOP front-runner really could have phrased himself better.

Check out the 2008 McCain campaign’s full oppo file for more petty (and some not-so-petty) morsels: