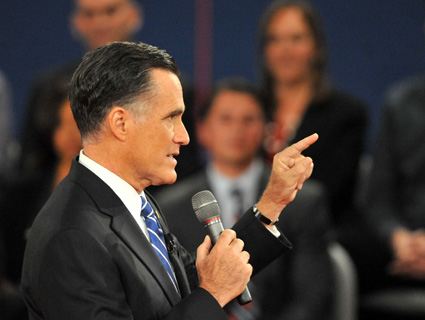 The issue of gun violence, long stuck in an unvirtuous cycle of hardened rhetoric, tends to get ignored in national politics. But 2012 has been terrible with mass shootings, and an audience member raised the issue in Tuesday’s town hall presidential debate, asking what will be done to limit the availability of assault weapons and keep them from criminals. President Obama, directly acknowledging the recent slaughter at a Colorado movie theater, called for a “comprehensive strategy” to deal with the problem.

Mitt Romney took a different approach, demonstrating that no issue is too peripheral for him to make false claims, dissemble, and utter comments likely to piss off women. (See also from Tuesday night: binders.) In less than three minutes, Romney bungled the facts on assault weapons, cited Fast and Furious as the nation’s “greatest failure” on gun violence, and, more broadly, pointed the finger at single moms:

But let me mention another thing, and that is parents. We need moms and dads helping raise kids. Wherever possible, the—the benefit of having two parents in the home—and that’s not always possible. A lot of great single moms, single dads. But gosh, to tell our kids that before they have babies, they ought to think about getting married to someone—that’s a great idea because if there’s a two-parent family, the prospect of living in poverty goes down dramatically.

That set up Romney’s assertion that “we can make changes in the way our culture works to help bring people away from violence.” (Watch his full remarks below.)

MoJo’s map, timeline, and analysis of 30 years of mass shootings in America.

If it seems a little nutty to suggest that fewer unwed mothers is key to reducing carnage from AK-47s, consider that Romney also recently embraced a debunked conspiracy theory involving a United Nations plot to seize Americans’ firearms. Moreover, Romney got his facts wrong Tuesday night, claiming in his initial response that it’s “already illegal in this country to have automatic weapons.” As the LA Times and other news outlets have since explained, automatic weapons can be possessed legally in the United States.

As for his declaring that the alleged Fast and Furious conspiracy is our nation’s “greatest failure” on gun violence, Romney might want to speak with survivors of the mass shootings in Aurora and Tucson, as Obama has. After Romney made time in September for a long chat with the National Rifle Association’s chief lobbyist, some of those survivors reached out to the GOP presidential candidate and asked for equal time. But as I reported recently, he has ignored them.

Not surprisingly, Romney wasn’t always such a hard-liner on guns. As Obama himself pointed out Tuesday night, the former Massachussetts governor once signed a ban on assault weapons similar to the federal legislation that expired in 2004. Watch Obama call him on it:

And here are Romney’s remarks in response to the town hall attendee’s question about assault weapons:

Footage via the New York Times, where you can see the full video and transcript.