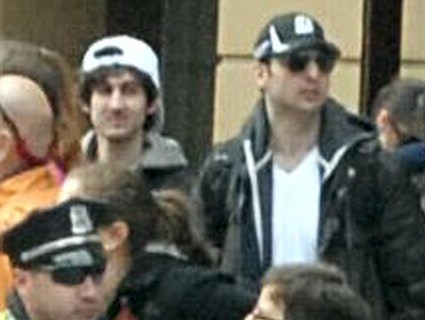 Boston bombing suspects Dzhokhar and Tamerlan Tsarnaev in an image taken at the Boston Marathon.fbi.gov

Update: White House press secretary Jay Carney said Monday afternoon that Dzhokhar Tsarnaev would not be held as an “enemy combatant.” President Barack Obama has previously stated that he “will not authorize the indefinite military detention without trial of American citizens.” The US Attorney’s Office-District of Massachusetts confirms that “Dzhokar Tsarnaev [is] charged with conspiring to use weapon of mass destruction against persons and property in [the] U.S. resulting in death[.]”

Before Dzhokhar Tsarnaev, the surviving suspect in the attack on the Boston Marathon, was even captured, Sen. Lindsey Graham (R-S.C.) wanted the the 19-year-old be held in indefinite military detention as an “enemy combatant.”

“If captured, I hope [the Obama] Administration will at least consider holding the Boston suspect as enemy combatant for intelligence gathering purposes,” Graham tweeted last Friday. In an interview with the New York Times‘ Charlie Savage over the weekend, Graham, who is up for reelection in 2014, elaborated on his reasoning:

You can’t hold every person who commits a terrorist attack as an enemy combatant, I agree with that. But you have a right, with his radical Islamist ties and the fact that Chechens are all over the world fighting with Al Qaeda—I think you have a reasonable belief to go down that road, and it would be a big mistake not to go down that road. If we didn’t hold him for intelligence-gathering purposes, that would be unconscionable.”

Graham is wrong. The government cannot hold Dzhokhar Tsarnaev as an enemy combatant. Under current law, the fact that Tsarnaev shares an ethnicity and religion with other extremists is insufficient grounds to detain him militarily. The 2012 National Defense Authorization Act, which Graham vocally supported, defines as eligible for military detention “a person who was a part of or substantially supported Al-Qaeda, the Taliban, or associated forces that are engaged in hostilities against the United States or its coalition partners.” There’s no evidence yet that the suspects in the Boston bombing acted with the support of or at the behest of Al Qaeda, the Taliban, or associated forces. Unless that evidence emerges, it wouldn’t be legal to hold Tsarnaev as an enemy combatant, even if he and his brother were motivated by extremist religious beliefs.

“It’s actually not a close question,” says Ben Wittes, a scholar with the Brookings Institution and writer at the national security blog Lawfare who supports military detention under some circumstances. “‘Substantially support’ is a reference to providing some material aid to the forces of the enemy…It means giving active aid to the enemy forces, it doesn’t mean taking independent action that happens to be congenial for them.”

Even if evidence emerges that the suspects in the Boston bombing acted with the support of or at the behest of a foreign group, the Supreme Court has not settled whether the military can detain people who are apprehended in the United States. Both the Bush and Obama administrations dodged potential Supreme Court cases that would have decided that question, precisely because the odds are good that holding someone suspect of a crime who is arrested on American soil in military detention is unconstitutional. Having the military detain someone captured on US soil could also jeopardize prosecution: In the three cases where Americans or legal residents have been held in military detention, those suspects got lighter sentences than they probably would have otherwise, Wittes says.

Graham has said he wants Tsarnaev held in military detention so the suspect won’t “lawyer up.” In other words, Graham would like to deprive Tsarnaev of his constitutional rights before he’s even been charged with a crime, let alone convicted of one.

“We live in a system where there’s a Sixth Amendment,” says Wittes. “There’s a reason why we have that right, and I can’t do anything about it and I don’t want to.”