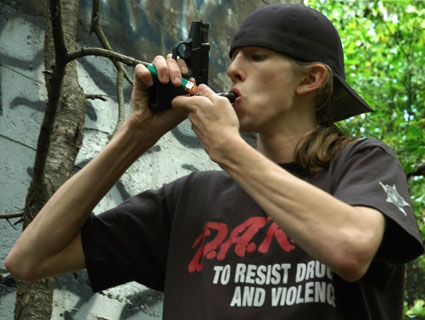 Gil Kerlikowske, director of the Office of National Drug Control Policy (ONDCP), dismissed calls for pot legalization on Thursday, citing a recent study by his agency to claim that marijuana is the drug most commonly linked to crime. During an Urban Institute panel discussion, while calling for a “21st century approach to drug policy reform,” Kerlikowske rejected legalization as a “bumper-sticker approach.” But the study (PDF) doesn’t actually show a causal relationship between pot and crime: Marijuana is far and away the most commonly used illegal drug, so it stands to reason that it would show up most often in drug tests.

Beyond that, the study’s data is based on self-reported drug use, meaning that arrestees were only given urine samples if they admitted to lighting up within the past month. Pot can be detected in an infrequent user’s urine up to about a week; for daily users, it can stick around for a month. In other words, the study doesn’t show whether people accused of crimes were actually on drugs at the time of their arrest.

Pot, and pot withdrawal, can result in symptoms that might lead to aggressive behavior. But, as everyone knows, people tend to smoke pot to chill out—even the federal government has done studies affirming its relaxing effects on people undergoing cancer treatment. Pot doesn’t lend itself to criminal behavior in the same way as, say, alcohol: In 2008, nearly 20 percent of assault victims reported that their attackers appeared to be drunk.

Last week, former President Jimmy Carter reversed course on his support for ballot initiatives that have made pot legal in Colorado and Washington. During a meeting with lawmakers and regulators from the two states, Carter said that “we must do everything we can to discourage marijuana use, as we do now with tobacco and excessive drinking.” That same day, the anti-legalization group Smart Approaches to Marijuana, which was co-founded by a former ONDCP employee, issued a press release commending Carter for embracing the group’s mental health and rehabilitation approach to pot.

Kerlikowske touted a similar “smart on crime” approach—rehabilitation over incarceration—on Thursday. That’s certainly a step in the right direction, but it still paints pot smokers with a broad brush as drug abusers who need help to get their lives back on track. What would Barry Obama have had to say about that?