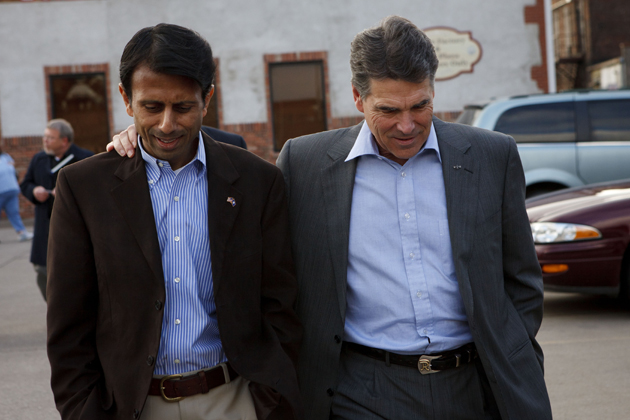 On Sunday the Baton Rouge Advocate reported on a disturbing trend: A full decade after the Supreme Court struck down anti-sodomy laws as unconstitutional violations of a right to privacy, the East Baton Rouge sheriff’s department was continuing to enforce the state’s version of the statute. Not only that, but it was going out of its way to do so, setting up stings to find and arrest gay men for the crime of having sex—even though the district attorney had pointedly refuse to prosecute those cases. “Whether the law is valid is something for the courts to determine, but the sheriff will enforce the laws that are enacted,” a sheriff’s department spokesman told the paper, apparently oblivious to the fact that a court had already made such a determination.

So how does Louisiana’s arch-conservative Republican governor, Bobby Jindal, a possible 2016 presidential candidate, feel about the parish’s continued enforcement of the invalidated sodomy law? He’s been silent. His office did not respond to multiple requests for comment on Monday, nor has he previously commented on the sodomy statute.

The sheriff’s department does have a point. The anti-sodomy statute is still on the books in Louisiana, and in 12 other states across the country. And in many of those cases, it remains on the books for a very particular reason: Republican lawmakers want it to. Lawmakers in Texas have quietly killed every legislative effort to erase its anti-sodomy statute (the one that was actually stricken down by the Supreme Court), which makes sense when you consider Gov. Rick Perry is on the record defending it, and the state GOP recently made a sodomy ban part of its official platform. Kansas Gov. Sam Brownback left his state’s sodomy statute out of a 2012 push to purge outdated laws. The last serious repeal push in Louisiana came in 2003, shortly before the Supreme Court decision, with opponents warning that legalized sodomy would lead to disease and child abuse—two things that, thanks to the sodomy ban, Louisiana had been mercifully free of for the last 207 years.

Keeping anti-sodomy statutes on the books serves no real function, since the crimes are impossible to prosecute. Mostly, the laws’ supporters just don’t want their states to legally acknowledge that there’s something OK about homosexuality. So-called crimes against nature, like other 19th-century relics such as mutton chops, DIY canning, and income inequality, are kind of “in” right now. In July, Virginia attorney general Ken Cuccinelli, who is running for governor as a Republican, launched a new website to defend his state’s anti-sodomy law.