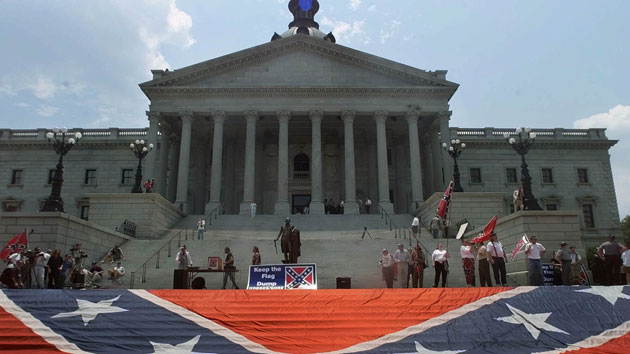 Pro-flag demonstrators at the South Carolina Capitol after the flag was removed from the dome in 2000.AP

South Carolina Gov. Nikki Haley will almost certainly order flags across the state to be flown at half-mast this week in honor of the black parishioners murdered Wednesday night at Emanuel African Methodist Episcopal Church in Charleston. But one flag will continue to fly as it always has—the Confederate flag in front of the Confederate Soldiers Monument on the grounds of the state Capitol in Columbia. In a photo posted by the New York Times, the alleged gunman, Dylann Storm Roof, is seen posing in front of a car with a license plate bearing several iterations of the flag. (In an odd twist, the Supreme Court ruled Thursday that Texas could refuse to offer specialty Confederate flag license plates that had been requested by the Sons of Confederate Veterans.)

SUSPECT IN #CharlestonChurchShooting caught in Shelby, NC. He’s believed to have killed 9 ppl last night at a church pic.twitter.com/EZOKHYjMcU

The flag, a symbol of the struggle by a white minority engaged in an armed insurrection to preserve its right to violently enslave the black majority, has long been a divisive issue in the state, and criticism of its continued display flared up again after Wednesday’s shooting. It was removed from the Capitol dome after massive protests in 2000, and as part of a compromise, relocated to the Confederate memorial. But the flag’s origins in Columbia are a remnant of segregation, not the Civil War—it was first flown over the Capitol in 1962 in response to the civil rights push from Washington.

Despite the most recent incident of racial violence, don’t expect the flag to come down any time soon. When Republican Gov. Nikki Haley was asked about it at a debate during her 2014 re-election campaign, she argued that it was a non-issue:

What I can tell you is over the last three and a half years, I spent a lot of my days on the phones with CEOs and recruiting jobs to this state. I can honestly say I have not had one conversation with a single CEO about the Confederate flag…We really kinda fixed all that when you elected the first Indian-American female governor, when we appointed the first African American US senator. That sent a huge message.

Given that less than 1 percent of Fortune 500 CEOS are black (compared with 28 percent of South Carolinians), they may not be the best focus group.