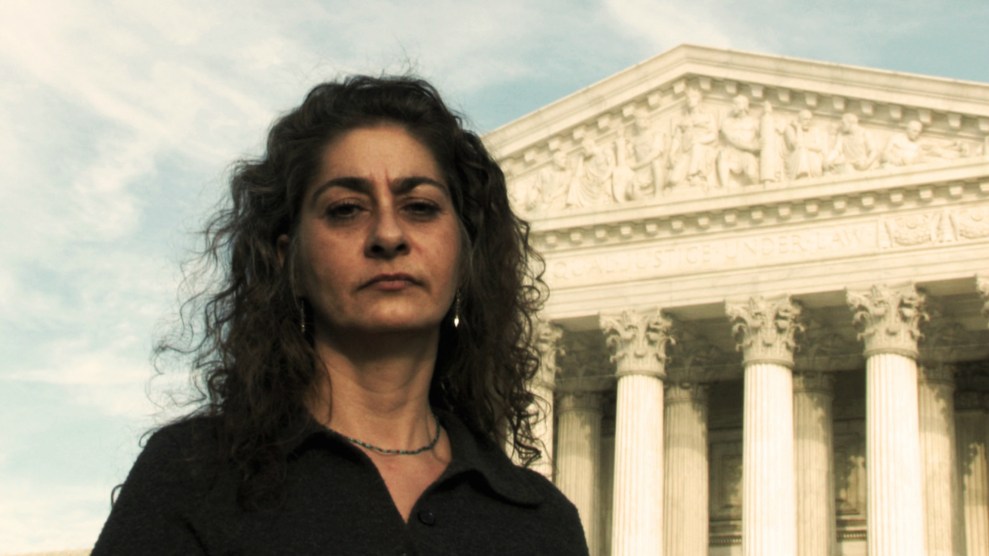 Jessica Lenahan thought that her domestic violence restraining order would protect her. In granting her the order, a Colorado court had determined that “physical and emotional harm would result” if her estranged husband, Simon Gonzales, was not barred from entering their Castle Rock, Colorado, home. When Lenahan’s three daughters, aged seven, nine, and 10, didn’t come home on time on June 22, 1999, she immediately suspected Gonzales.

Lenahan called the Castle Rock Police Department. She told the police that she believed Gonzales had violated the restraining order and asked for assistance in locating her daughters. The police said that as their father, Gonzales had a right to spend time with his children, pointing to a clause in Lenahan’s order that allowed Gonzales to visit the girls at least once every week. (The order specified that the meeting had to be arranged in advance.) When Lenahan continued to call, the police recommended that she try contacting Gonzales herself and at one point suggested that she call the department’s nonemergency line, saying that it was “a little ridiculous [that Lenahan was] making us freak out.”

Shortly after midnight, Lenahan went to the police station, telling the officers that her daughters still weren’t home. An officer requested that a bulletin be sent notifying the police force that the department had launched efforts to find the girls. The bulletin was never sent.

A few hours later, Gonzales drove to the police station and opened fire at the officers inside. He was soon shot and killed by police. The deceased bodies of his daughters were found inside his pickup truck.

The first 20 minutes of Home Truth, a documentary premiering at the Human Rights Watch Film Festival on Sunday in New York, are difficult viewing. Filmed over nine years, the film follows Lenahan, the first domestic violence survivor to successfully sue the United States for violating her human rights. After more than a decade of legal battles, Lenahan’s case has changed federal policies concerning domestic violence victims in ways that are still in effect today.

“The film is the story of one woman’s pursuit of justice, [as well as an] unflinching look at what that pursuit has cost her,” says April Hayes, one of the directors of the documentary.

Home Truth follows Lenahan, her only surviving son, and his family as they process what happened on that fateful night in 1999 and how the legal system failed to protect Lenahan and her daughters. “I did everything I was supposed to do,” Lenahan says in the film. “The law still failed me.”

According to the National Coalition Against Domestic Violence, more than 10 million people, the majority of them women, suffer from domestic abuse each year. Restraining orders began being issued in the 1970s to protect domestic violence victims. More than a million orders are given each year.

Lenahan sued the Castle Rock Police Department for violating her constitutional rights by failing to enforce her order and said that the department had broken both the terms of the restraining order and state law when it failed to apprehend Gonzales. “Jessica had every reason to believe that the language of the order on its face was what was governing the police’s actions,” Carrie Bettinger-Lopez, Lenahan’s lawyer during later appeals, tells Mother Jones. The Colorado district court disagreed, ruling that Lenahan had no right to sue over the enforcement of her restraining order. After years of appeals, the Supreme Court sided with the department in 2005, ruling in a 7-2 decision that Lenahan—and by extension other domestic violence survivors—did not have the right to police enforcement of a restraining order.

“The decision totally disabled our one invaluable piece of paper that was designed to protect us,” Lenahan says in an interview. “It was no longer worth the paper it’s written on.”

Unwilling to drop her fight, Lenahan worked with Bettinger-Lopez and the ACLU to bring the case before the Inter-American Commission on Human Rights, a Washington, DC-based international tribunal that aims to protect human rights in the Americas. Bettinger-Lopez explains that while the commission had no real ability to enforce a decision, getting an affirmative ruling from the tribunal was one way of  “naming and shaming” the United States for having inadequate protections for victims of domestic violence.

It would take years before the commission’s ruling would actually lead to policy changes. In 2015, Lenahan’s case led to the creation of new Justice Department guidelines regarding gender bias in policing. In a statement announcing the guidance, then-Attorney General Loretta Lynch said “gender bias, whether explicit or implicit, can severely undermine law enforcement’s ability to protect survivors of sexual and domestic violence and hold offenders accountable.”

The guidance noted that gender bias qualified as a form of discrimination and called for police departments to alter their practices to ensure that survivors were protected. In the 18 months since the guidance was implemented, the Justice Department has used the policy to highlight wrongdoing in police departments in across the country, most recently revealing police failures in Baltimore. In addition to the federal changes in the wake of the commission’s decision, dozens of municipalities have adopted resolutions declaring freedom from domestic violence to be a human right.

“Jessica’s case really spurred the development of that guidance,” says Bettinger-Lopez, who worked as the White House Advisor on Violence Against Women during the Obama administration.

Further progress at the federal level could be in jeopardy under the Trump administration. Advocates fear that Attorney General Jeff Sessions will not fully enforce the Violence Against Women Act, a 1994 law protecting victims of domestic violence, sexual assault, and stalking. The president’s 2018 budget projects a 93 percent decrease in funding for federal grant programs targeting violence against women over the next decade.

“We naively thought that the hard work that we had witnessed would just be continuing,” says Hayes. “Survivors’ voices are more important than ever.”

Home Truth is a “long-term study of how families are affected by domestic violence,” says Katia Maguire, who co-directed the documentary. “The strength of the material we had was the relationship between Jessica and her son and witnessing how the tragedy and legal process has affected them.”

Lenahan plans to keep up her advocacy work in this difficult political climate. “I don’t believe that our work is going to stop because of this administration,” she says. “This will always be my purpose.”