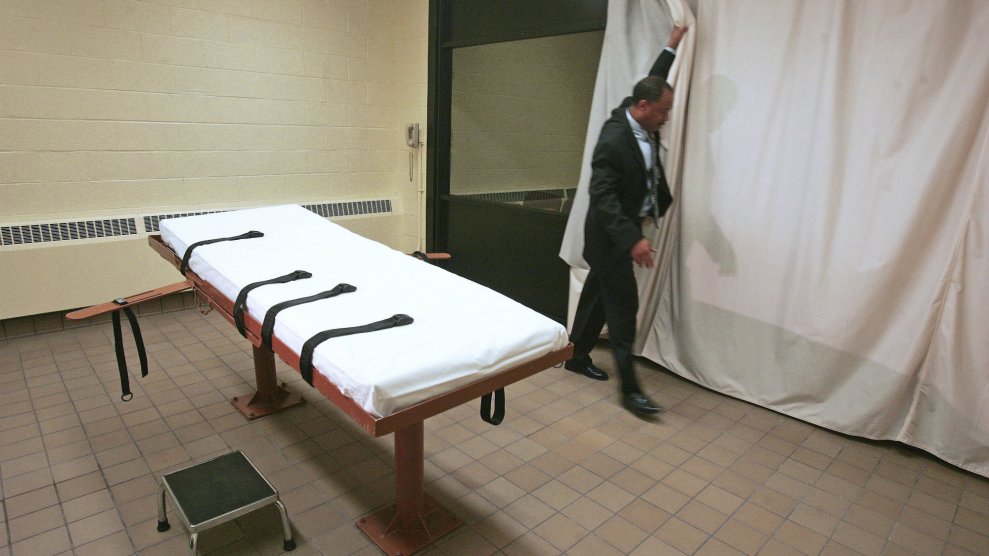 The death chamber at the Southern Ohio Corrections FacilityKiichiro Sato/AP

Prison officials in Ohio called off an execution Wednesday, after medical staffers spent more than 45 minutes trying to find a suitable vein through which to inject death row inmate Alva Campbell with a lethal cocktail of drugs.

After Wednesday’s unsuccessful execution attempt, each of the prison medical staffers shook the inmate’s hand.

After saying that there were no problems with Campbell’s veins 90 minutes before the execution was scheduled to begin, officials began the execution procedure. But Ohio Department of Rehabilitation and Correction director Gary Mohr subsequently conceded that “viable” veins could not in fact be found.

According to the Columbus Dispatch, prison nurses attempted to place the IV needle twice in Campbell’s left arm, twice in his right arm, and one time in his right leg, below the knee. The paper reported that Campbell cried during the failed procedure.

“This marks the fifth botched execution for Ohio in recent years, and the second time the state could not complete an execution,” Mike Brickner, a senior policy director at the American Civil Liberties Union of Ohio said in a statement. “This not justice, and this is not humane.”

Campbell, who is 69 years old, has been on death row for two decades for the 1997 murder of 18-year-old Charles Dials. Campbell suffers from chronic obstructive pulmonary disease, needs multiple breathing treatments per day, and uses a colostomy bag. His lawyers had argued that he was too sickly to be executed. During a test run on Monday for the execution, no suitable veins could be found and the inmate became agitated when prison staffers attempted to lay him flat, according to the Associated Press. A judge ruled that Campbell could use a wedge pillow to help him breathe during the execution.

Campbell’s ordeal is similar to that of another Ohio inmate whose execution was called off after prison employees could not find a suitable vein. In 2009, that prisoner, Romell Broom, tried to help nurses find a vein on his own body—to no avail. In 2016, the Ohio Supreme Court ruled that the state was could attempt to execute Broom again. He is still on death row.

After Wednesday’s unsuccessful execution attempt, each of the prison medical staffers shook the inmate’s hand. For now, Campbell will go back to death row. His fate is now in the hands of Gov. John Kasich (R), who is tasked with rescheduling the execution.

Update: The Associated Press is reporting that Gov. Kasich has rescheduled Alva Campell’s execution for June 5, 2019.