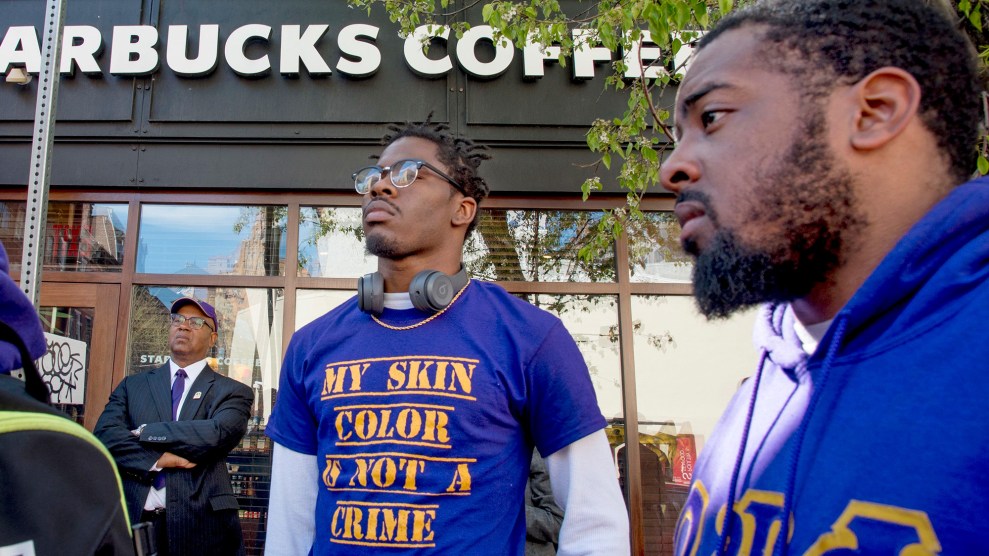 A protest outside the Starbucks where two black men were arrested last month while awaiting a business partner.Tom Gralish/Philadelphia Inquirer/AP

The latest addition to the list of things you apparently can’t do while black is a doozy.

On Monday, a white graduate student at Yale called campus police on a black classmate who was sleeping on a sofa in the common room of the building where both students lived—Lolade Siyonbola, a grad student in Yale’s African studies program, had fallen asleep while studying.

“I paid tuition like everybody else. I am not going to justify my existence here.”

Siyonbola was detained for more than 15 minutes as officers tried to verify she was a student. The spelling of her name on her student ID apparently didn’t match the spelling in the database the officers used to look her up—which is really not all that surprising. Afterward, she posted two videos of the ordeal to Facebook. In one of them (below), which has hundreds of thousands of views, an officer asks for her ID. Siyonbola asks why, and another cop says they need to “make sure you belong here.”

“I deserve to be here. I paid tuition like everybody else. I am not going to justify my existence here,” Siyonbola protests later after one of the officers asks about the assignment she was working on. After a bit more back and forth, she adds, “I’m not going to be harassed.”

Siyonbola also informed the officers that the woman who called her in had previously called the police on her friend “because he was black and in the stairwell.”

Stuff like this happens every day in America: Black and brown Americans are unfairly perceived as suspicious or threatening by store clerks, restaurant managers, cops, and everyday people—who are often quick to call in law enforcement over behavior that is legal and/or benign.

Here are 10 additions—since the mid-April arrests of two law-abiding men at a Philadelphia Starbucks—to the list of things you apparently can’t do while black or brown:

If that’s not enough for you, here are 21 previous examples compiled by a former colleague. And here’s that sideways “napping while black” video.

Part 2 – Sarah Braasch, Philosophy PhD student, called the cops on my friend a few months ago for getting lost in my building. Today she messed—again—with the wrong one.