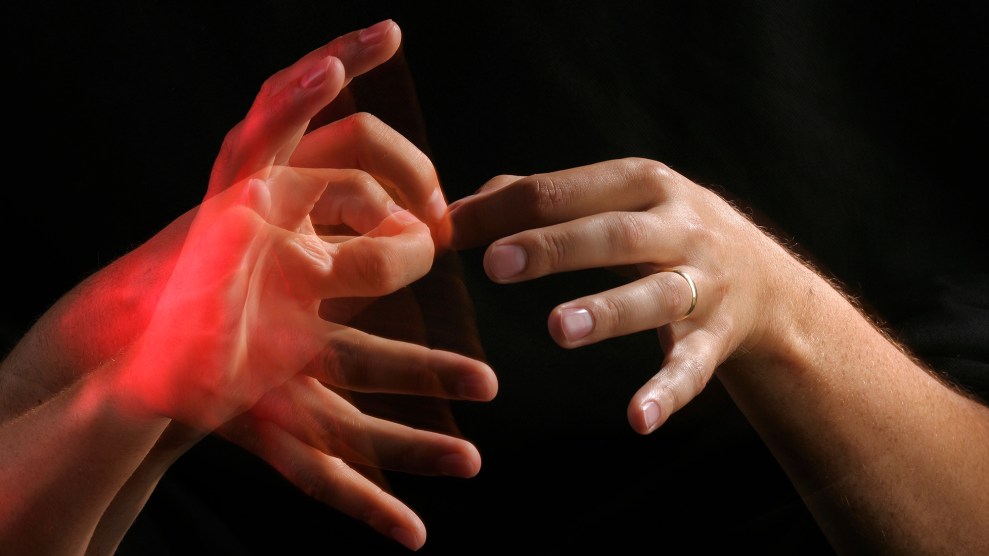 In sign language, this means "Interpreter." The shutter has been held open long enough to capture the motion.digpro/Getty

In 2016, an inmate in Corcoran, California, faced a dilemma. The parole board wanted to know whether he’d completed any self-help programs during his incarceration, a sign that he’d rehabilitated and could be trusted to go home. The inmate, whose name has been withheld for privacy reasons, said yes: At the Substance Abuse Treatment Facility (SATF), a state-run correctional center, he’d signed up for a group for people serving life sentences. The problem, he admitted, was that he was deaf, and his hearing impairment prevented him from understanding what went on during meetings. “I guess they’re waiting to get an interpreter for that group,” he explained to the board, referring to a sign language interpreter. “But I’ve been going,” he added. “I’m showing up.”

It wasn’t enough for the parole board, which denied him release. “I understand you have limitations,” one of the commissioners said, according to court documents. The commissioner scolded him for not participating in more programs. He would have to wait five years before applying for another hearing.

Under federal law, all prisons are required to provide qualified interpreters for deaf inmates to help them participate in education and self-help classes and communicate with guards. But at SATF, where most of California’s deaf inmates are housed, hard-of-hearing prisoners are regularly denied access to interpreters, according to recent court filings in a long-running disability rights case known as Armstrong v. Brown. “With limited access to programs, deaf class members run the risk of serving longer prison sentences,” wrote attorneys at the Prison Law Office in a statement filed with the court in May. Inmates say the facility has failed to offer interpreters for some Alcoholics and Narcotics Anonymous meetings, lifer groups, religious services, and educational and vocational programming.

In California, deaf inmates’ fight for equal rights stretches back decades. In the 1990s, the state corrections department admitted that deaf prisoners were generally expected to communicate through a combination of written notes, lip-reading, gesturing, and sometimes an informal staff or inmate interpreter. But as the corrections department acknowledged, even the best lip-readers can only understand a fraction of spoken words, and many people who rely on American Sign Language never learn to read or write English. “They are wholly different languages,” says Talila Lewis, director of the nonprofit group HEARD, which notes that ASL uses its own syntax and grammar, and that the average deaf prisoner’s reading comprehension is at about a second-grade level.

In a series of orders from 1996 to 2002, the US District Court for the Northern District of California ruled in Armstrong that the state’s treatment of prisoners with disabilities, including deaf inmates, violated the Americans with Disabilities Act. In 2013 the court found that while the situation had improved, SATF was still failing to provide interpreters at about a quarter of classes for which interpreters were needed—a level, Judge Claudia Wilken noted, that “simply does not constitute making a reasonable effort to comply with the court’s prior orders.” She told the facility to provide a qualified interpreter for any educational or vocational class that enrolled an inmate who communicated through sign language.

One inmate at SATF complained he was removed from an Alcohol Anonymous class without explanation after requesting an interpreter in 2016.

Five years later, that still hasn’t happened, the Prison Law Office told the court in its May filing. When deaf inmates try to enroll in programs, some believe they are rejected because of their special needs. One inmate at SATF complained he was removed from an Alcoholics Anonymous and Narcotics Anonymous class without explanation after requesting an interpreter in 2016. Another inmate in the building maintenance vocational program said he struggled to understand the instructor during conversations about safety and proper equipment. “Most of the time, no sign language interpreter is provided for the safety meetings, and he relies on an incarcerated person to attempt to finger spell the instructions,” the attorneys noted. They argue that the need for interpreters increased after California voters passed a ballot initiative in 2016 that allocated more funding for rehabilitation programs in prisons and gave inmates more opportunities to earn time off their sentences by participating in them.

The California Department of Corrections and Rehabilitation, which hired more full-time interpreters for SATF after the 2013 order, told the court in May that its use of staff interpreters, contract in-person interpreters, and video remote interpretation provided inmates with reasonable access to programs and complied with the Americans with Disabilities Act. “We are committed to ensuring hearing impaired inmates are provided equal access to program assignments and will continue to work to provide services to hearing impaired parolees,” a spokeswoman for the department told Mother Jones. The warden at SATF last month directed his staff to draft a new policy memo for sign language interpreters and to implement training, according to Prison Law Office attorney Rita Lomio. “I am cautiously optimistic,” she says, adding that if the situation does not improve soon, her office will consider whether to seek court intervention.

California, because of its size, has more deaf inmates requiring sign language interpreters than most other states—about 75 at SATF alone, according to the corrections department. And the fact that so many are clustered at one institution creates problems, according to prisoners rights advocates, because SATF is located in a remote part of California’s Central Valley, far from the biggest pools of interpreters in metropolitan areas like San Francisco and Los Angeles. “Not all of them want to drive two hours to go to a prison to translate when they could go to a school or hospital down the street from their home,” says Corene Kendrick, another attorney at the Prison Law Office.

Over the past few years, deaf inmates across the country have sued for better treatment and access to programs. In 2016, a deaf man in Washington, DC, was awarded $70,000 in damages after he was jailed for two months without an interpreter. Maryland, Kentucky, and South Carolina have also reached legal settlements to improve access to interpreter services in prisons. “Nearly all state prisons and the entire federal prison system are in violation of federal law with respect to providing [for] deaf and hard-of-hearing inmates and parolees,” writes Howard Rosenblum, CEO and director of legal services for the National Association of the Deaf.

“It’s the utmost violation of due process I can think of,” says attorney Gay Crosthwait Grunfield.

When deaf inmates leave the prison, some also struggle to access interpreters for parole meetings, especially if they live in remote areas. Between August and December 2017, for example, one deaf parolee in California allegedly did not have access to an interpreter for four out of five parole-mandated mental health appointments. He was soon rearrested, according to Gay Crosthwait Grunfeld, a partner at the law firm Rosen Bien Galvan & Grunfeld who argues the lack of interpretation services prevented him from fully taking advantage of his treatment program and may have contributed to his recidivism. “It’s the utmost violation of due process I can think of,” she says.

In the May filing, the California Department of Corrections and Rehabilitation argued interpretation services are not required for every parole encounter. The department’s attorneys wrote that the use of in-person interpreters could also present safety and security issues, though they did not elaborate. They noted that the parole division was exploring ways of providing interpretation services over cellphones or tablets, and that the corrections department was recently authorized to hire another interpreter at its headquarters to help parole officers in the field.

“We are not discounting how challenging it is,” says Grunfeld. “We are just saying we need to try harder.”