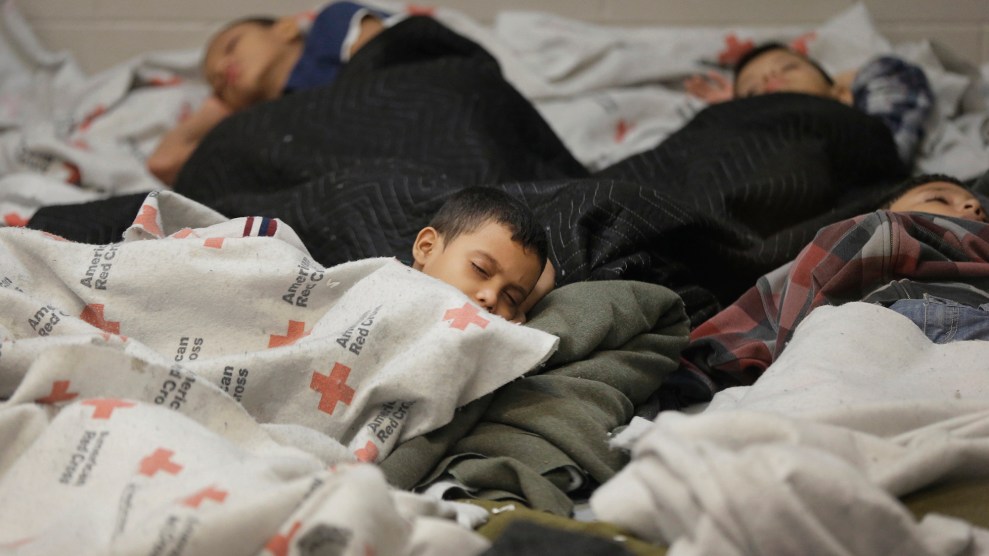 Unaccompanied minors sleep in a holding cell at a US Customs and Border Protection processing facility in Brownsville, Texas in 2014. Eric Gay/Associated Press

A federal judge on Monday ordered the Trump administration to stop medicating detained immigrant children without consent and to release some of them from a psychiatric center and high-security juvenile halls where they have allegedly been held in abusive conditions.

US District Court Judge Dolly Gee in California ruled that their detention in these facilities violated the Flores settlement, a 1997 federal court decision that requires immigrant kids in government custody to be held in the “least restrictive setting” possible. As I reported earlier this month following an investigation by Reveal, children at the Shiloh psychiatric center in Texas claimed they had been forcibly held down and injected with powerful psychotropic drugs that made them dizzy or incapacitated. Kids at juvenile halls in Virginia accused guards of beating them while they were handcuffed, strapping them to chairs with bags over their heads, or isolating them for long periods in solitary confinement. It’s unclear how many of these children were separated from their parents at the border and how many were put in government custody after arriving to the country without an adult.

Kids at juvenile halls in Virginia accused guards of beating them while they were handcuffed, strapping them to chairs with bags over their heads, or isolating them for long periods in solitary confinement.

In recent years, kids were sent to these facilities for a range of reasons, including for expressing sadness and anxiety after being separated from family members, or for acting out at low-security shelters as they dealt with earlier trauma. In her decision on Monday, Judge Gee told the government to transfer all immigrant children out of the Shiloh psychiatric center except for those who have been found by a psychiatrist or psychologist to pose a danger to themselves or others. Going forward, she wrote, the government must get “informed written consent” from a parent, family member, or sponsor—or a court order—before medicating kids in nonemergency situations. The center must also stop using “security measures that are not necessary for the protection of minors or others, such as the denial of access to drinking water.” A child named Julio Z. had testified that he was injured when a staff member threw him to the ground after he tried to quench his thirst. (In a statement, Shiloh psychiatric center has denied allegations of abuse.)

The Office of Refugee Resettlement must also release some immigrant children from juvenile halls in California and Virginia. This includes kids who have been sent to these facilities solely because they “may be chargeable” with a crime (but are not currently chargeable), as well as those who were targeted just because they said they were in a gang or displayed gang affiliation but have not committed any other offense. The government may continue to hold immigrant kids in juvenile hall who are charged with or convicted of a crime or the subject of delinquency proceedings, or who have threatened violence or engaged in dangerous behavior at low-security government shelters.

But these children must be given better notice of why they are being transferred, the judge ordered. Kids in the past reported being awakened in the early hours of morning and sent in shackles to juvenile halls without any warning or explanation of the accusations leveled against them. Some were detained there for three or four months without receiving written notice of the reason for their transfer—a delay that the judge said violated the terms of the Flores settlement. She also called for changes that would allow parents or other relatives to resume custody of their children from juvenile halls more quickly, after family members reported long delays.

Check out the full ruling below, and read more about conditions at the juvenile halls here.