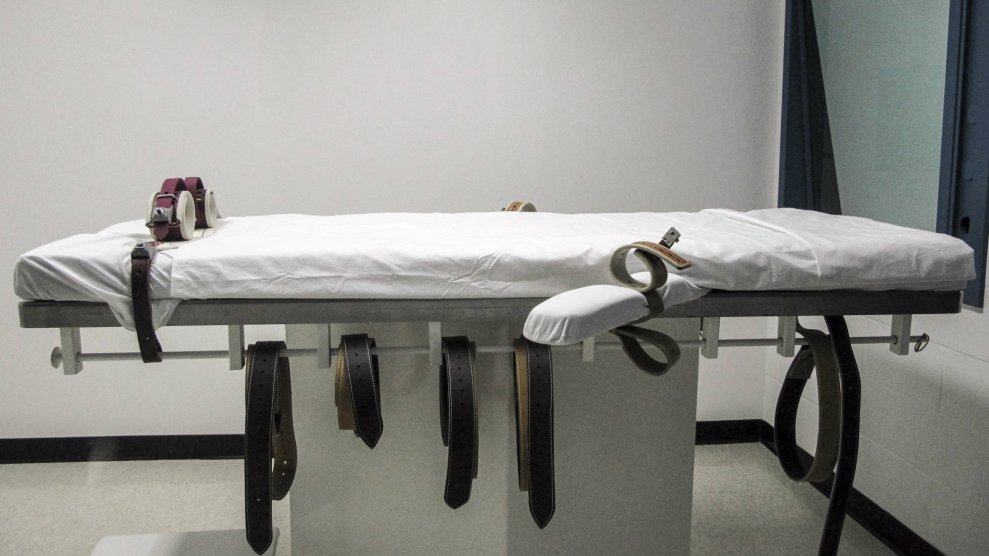 Update, 1:10 p.m.: The pharmaceutical company Fresenius Kabi filed a lawsuit late Tuesday night alleging that the state plans on using its potassium chloride to execute Carey Dean Moore. The company sent a letter to Republican Gov. Pete Ricketts last month opposing the use of its products in executions. Nebraska says it lawfully obtained the potassium chloride but still will not disclose the source of its drugs.

After Nevada’s attempt to execute Scott Dozier using fentanyl failed last month, another state is going to try to use the powerful opioid for its own execution. On August 14, Nebraska is planning to put 60-year-old Carey Dean Moore to death using an untried three-drug cocktail that includes fentanyl, a muscle paralyzer, and potassium chloride, which will stop the inmate’s heart.

At a time when public support for the death penalty is diminishing, and drug manufacturers are refusing to sell their products to prisons that intend on using them in executions, states that want to put inmates to death are facing more obstacles than ever before. Some have simply stopped executions altogether while others, like Nebraska and Nevada, have turned to more extreme measures.

Deborah Denno, a law professor and lethal injection expert at Fordham University in New York, explained an additional problem with the plan to the Associated Press, “When states start experimenting with a new drug combination, it heightens the likelihood there’s going to be some kind of error.”

“When states start experimenting with a new drug combination, it heightens the likelihood there’s going to be some kind of error.”

Carey Dean Moore, who has been on death row for 38 years for the 1979 murders of Maynard Helgeland and Reuel Van Ness Moore, will be the first person executed in the state since 1997, when Robert Williams was sent to the electric chair for two murders. He has had seven execution dates; the most recent were in 2007 and 2011. In 2007, his life was spared when the Nebraska Supreme Court ruled that the electric chair was unconstitutional. It didn’t happen in 2011 because one of his lawyers challenged the purchase of one of the lethal injection drugs.

Next week, Nebraska plans to execute Moore using fentanyl, diazapem, which is a sedative, cisatracurium, which is a muscle paralyzer, and potassium chloride, which will stop his heart. Before Scott Dozier’s execution in Nevada was halted, officials had planned to use cistracurium before switching to a midazolam, another controversial sedative that has been blamed for several botched executions. As Dr. Joel Zivot told Mother Jones in July:

Medical experts are particularly worried about the effects of cisatracurium, the muscle paralyzing drug. When the drug is injected, Dozier will be unable to move any part of his body, including using his diaphragm to breathe. “He will be dying of asphyxiation,” says Dr. Joel Zivot, an anesthesiologist at Emory University. “These inmates are drowning in their own saliva, but because they can’t move, they don’t indicate that they’re struggling.”

Dozier’s execution was halted hours before it was to take place, when the manufacturers of the drugs the state intended to use filed a lawsuit alleging that the state had purchased Midazolam from an unsuspecting intermediary. They stated that the intermediary would not have sold the drug knowing that it was going to be used in an execution. Judge Elizabeth Gonzalez from Clark County barred Nevada from using the drugs in question. In turn, Nevada filed a petition with the state’s supreme court asking it to throw out the lower court’s decision. The state supreme court has yet to decide on the case, and Dozier remains on death row awaiting his execution.

A similar challenge can’t be mounted in Nebraska because the state has not disclosed its drug supplier, sparking criticism from the ACLU of Nebraska and local media outlets for its refusal. This has led to a tug of war over the last few months between anti-death penalty advocates and the state. The conflict began last December, when the civil liberties group sued Nebraska in a state court saying that the Department of Corrections was violating the state’s public records act by not complying with the open records request it had filed. Danielle Conrad, the group’s executive director said in a statement, they intended to “force the crisis-riddled department of Corrections to identify the supplier of recently obtained lethal injection drugs in compliance with our strong open records laws.”

In March, the ACLU accused the state of illegally obtaining the fentanyl that will be used in Moore’s execution and asked the Drug Enforcement Administration to look into the matter. After an investigation, the DEA said the state had legally obtained the drugs but did not disclose from where. In June, a district court judge ordered the Department of Corrections to release the public records regarding the state’s lethal injection supply, a ruling that Nebraska is appealing, while the source of the drugs remains unknown.

The pending lawsuits did not derail the Nebraska’s plans to execute Moore, and in July, the state issued his death warrant. “That an execution would be carried out when the governor, attorney general, and Department of Corrections have not honored open records laws and kept public records about the procedure secret from Nebraskans is incredibly troubling,” Amy Miller, the ACLU of Nebraska’s legal director said.

Independent state senator Ernie Chambers also urged the drug company Pfizer to mount a lawsuit against the state in order to halt the execution, but Pfizer said it had no records indicating that Nebraska had obtained any restricted drugs.

Despite the legal flurry surround the case, Carey Dean Moore, much like Scott Dozier in Nevada, has resigned himself to his fate. His twin brother, David Moore, plans to attend the execution. “If this happens it’s a relief. Dean has almost been executed six or seven times and each time you start preparing yourself for it,” he told the Lincoln Journal-Star. “He would just like to die.”