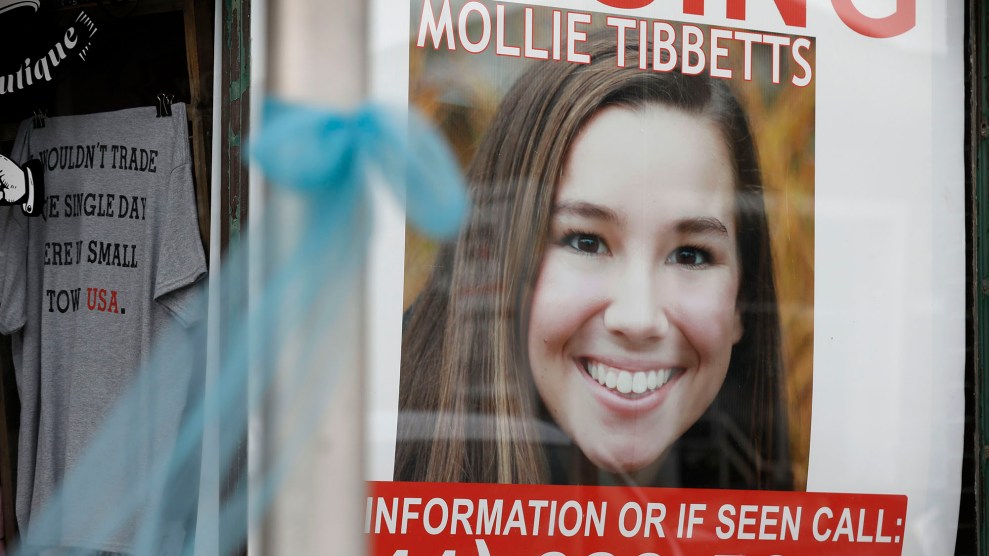 A poster for missing University of Iowa student Mollie Tibbetts hangs in the window of a local business on August 21 in Brooklyn, Iowa. Charlie Neibergall/AP Photo

A neo-Nazi podcast host has come under scrutiny for a spate of racist robocalls in Iowa and Florida. The Iowa call uses the death of Mollie Tibbetts, the college student allegedly slain by a 24-year-old Mexican national last month, to propagate virulent anti-immigration rhetoric.

“The Aztec hybrids, known as mestizos, are low-IQ, bottom-feeding savages, and [that] is why the country they infest are crime-ridden failures,” the caller says, according to a recording obtained by Iowa Starting Line. “That’s now America’s fate too unless we re-found America as whites-only and get rid of them now. Every last one.”

The script also disputes comments by the Tibbetts family, who say their daughter wouldn’t have supported the calls for a more restrictive immigration policy that followed her death. Her alleged killer, Cristhian Bahena Rivera, is an undocumented immigrant, according to federal officials.

The Florida calls, which came at the tail end of the Democratic primary for the gubernatorial race, mocked the black (and ultimately victorious) Democratic candidate, Andrew Gillum, using an exaggerated minstrel voice, with jungle noises in the background, the Tallahassee Democrat reports. (Gillum’s Republican rival, Ron DeSantis, who has himself been accused of using racist rhetoric, disavowed the calls.)

Both calls claim they were paid for by the Road to Power. The Road to Power is a video podcast hosted by Idaho white supremacist Scott Rhodes, according to the Spokesman-Review.

Rhodes was previously suspected of distributing racist propaganda in his Idaho hometown and in Alexandria, Virginia. According to the Des Moines Register, he has been linked to previous robocalls in California, Oregon, and Charlottesville, Virginia, the site of a violent white supremacist rally last year. The Iowa calls show a phone number associated with Brooklyn, Iowa, the town from which Tibbetts disappeared. The Hill reports that the Iowa attorney general’s office is investigating those calls and has alerted the state civil rights commission.

Tibbetts’ body was discovered last week. Following news reports that the alleged perpetrator was undocumented, the Trump administration and several Republican politicians seized on the opportunity to blame Tibbetts’ death on lax immigration policy, even though most studies on the issue show that illegal immigration does not increase violent crime.

For 34 days, investigators searched for 20-year-old Mollie Tibbetts. Yesterday, an illegal alien, now charged with first-degree murder, led police to the cornfield where her body was found.

The Tibbetts family has been permanently separated. They are not alone. pic.twitter.com/BBskwHEJoU

As Iowans, we are heartbroken, and we are angry. We are angry that a broken immigration system allowed a predator like this to live in our community, and we will do all we can bring justice to Mollie’s killer.

Tibbetts’ father, Rob Tibbetts, commended the local Hispanic community last week for its help during the search for his daughter, saying, “The Hispanic community are Iowans. They have the same values as Iowans. As far as I’m concerned, they’re Iowans with better food.” Other family members, including one person who claims to be a distant cousin of Tibbetts, spoke out against what they called politicization of her death.

hey i’m a member of mollie’s family and we are not so fucking small-minded that we generalize a whole population based on some bad individuals. now stop being a fucking snake and using my cousins death as political propaganda. take her name out of your mouth. https://t.co/xxZNBF0Uv9

Despite what Tibbetts’ family has said publicly, the robocalls claim Tibbetts would not have supported “the invasion of America by a brown horde currently at a staggering 58 million…If after her life has now been brutally stolen from her she could be brought back to life for just one moment and asked, ‘What do you think now?’ Mollie Tibbetts would say, ‘Kill them all.’”

It goes on: “We don’t have to kill them all, but we do have to deport them all.”