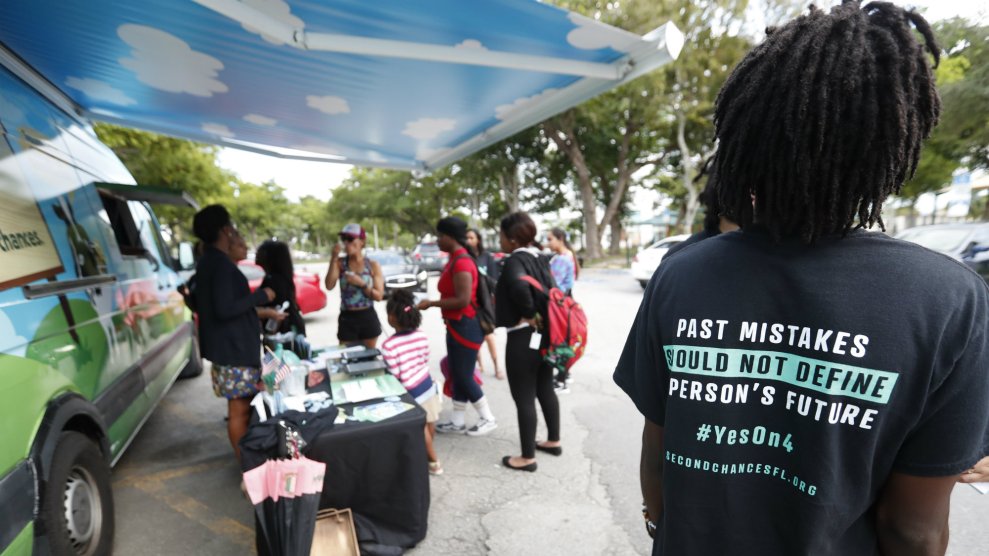 People gather around the Ben & Jerry's "Yes on 4" truck to learn about Amendment 4 in Miami, Florida. Wilfredo Lee/AP

On Election Day, Susanne Manning plans to wake up early and head to the polls—but not to vote. Manning, 57, can’t cast a ballot because of a previous felony conviction. Instead, she plans to spend as much time as she can outside one of the biggest polling stations in Orlando, Florida, holding a sign supporting Amendment 4—a ballot measure that would restore the right to vote to as many as 1.4 million ex-felons like her.

It will be the culmination of the months she’s spent organizing and garnering support for the initiative. As the reentry coordinator for the Florida Rights Restoration Coalition (FRRC), a grassroots organization spearheading the campaign for Amendment 4, Manning has knocked on doors and visited courthouses and food trucks to collect signatures and talk to potential voters. Just days before the election, she tells me that she’s hopeful and optimistic and trying to stay focused.

Still, she doesn’t hesitate to note just how much is at stake for her: “The two greatest things I lost when I went to prison was my child and my voice to be counted as a voter,” says Manning, who spent 19 years in prison for embezzlement. Now, working for an organization like the FRRC and supporting Amendment 4 has renewed her faith in her ability to make change. “This is my life. This is my hope. This will give me my voice back.”

Along with Iowa, Kentucky, and Virginia, Florida is one of four states where people convicted of felonies indefinitely lose their right to vote unless their rights are restored by a governor—but that could change this Tuesday if Amendment 4 passes. The measure needs 60 percent of the vote to pass and so far has received support from both Republicans and Democrats. (The measure, it’s worth noting, would not restore rights for those convicted of murder or a sexual offense.)

Manning tells me that if Amendment 4 gets approved, it would do more than just restore rights for people in Florida. “If we win on November 6, then there’s hope for those other three states,” she says. “People need to know that there’s hope.” And she constantly urges others to vote. “I ask everybody I know, ‘Can you please vote for me? Your vote is my voice.'”

Ahead of the midterm elections, we reached out to people who cannot vote due to past felony convictions: We wanted to know why voting was important to them and hear how they’re participating in the political process in other ways. We spoke to people who currently do not have a right to vote, and those who recently had their rights restored. A common question they raised: Shouldn’t someone who has served their time, paid their fines, and contributes to society have the right to vote? Responses have been edited for length and clarity.

I can’t vote, but I can educate others

“I’m formerly incarcerated. Louisiana is one of the states where, so long as you are under an order of imprisonment, you cannot vote—and an order of imprisonment counts as probation and parole as well. I was released in May 2009, and I’ve been unable to vote since. I graduated from college, worked in the hospital, I’m now an executive director for an organization—we do a lot of work, passed a lot of legislation, and I’m still unable to vote. But [because of some recent legislation], in March of 2019, I’ll be able to vote again.

You don’t even feel like a whole human being if you can’t contribute to the voting process; it’s like taxation without representation for the last nine years. In January, it will have been 10 years since I lost my right to vote. I was 19 when I went to prison, and I was able to participate in one election before then, but without really fully understanding the meaning of how important it is to vote.

If I pay taxes, I should be able to vote

“I’m a taxpaying citizen in the state of Florida. I should be able to be a part of the decision making process. I think as a United States citizen, it’s unfair and against our constitutional rights. My felony background doesn’t exempt me from paying taxes, but it exempts me from being part of the decision making process, from getting certain housing and jobs—and that’s something we need to change. My incarceration was punishment enough—and I believe that as an American, it is my right to vote, and it shouldn’t be taken away because of one mistake.

With Amendment 4, this is the first piece of legislation where I saw both sides agree. We’re seeing extremely low pushback, and people of all backgrounds agree that we should all get second chances. I feel really good [about the measure]: I don’t have to hide that I am a convicted felon, and I’m so happy that this movement around Amendment 4 is being led by returning citizens and that we are allowed to have a platform to tell our stories and live our truth.

I’ve been canvassing, going to events, speaking at rallies, anywhere I’m needed. Everything that you think a person can do, I’ve been doing it. I’ve been getting my family involved. If this Amendment passes, I think it will motivate other states; I believe it will open up the flood gates for us to affect the criminal justice system in the country; this will set the example for those that are a little behind.” —Valencia Gunder, 34, community activist, Miami

Taking away someone’s right to vote affects an entire family

“I was charged with a felony conviction at the age of 18 and served out my time. I started really realizing the significance of democracy when I participated in my daughter’s preschool—you realize that local officials make a big difference, whether it’s a school board official or a council member. It really hit home when we had our first African American president. I had been 10 years removed from my felony conviction, and I couldn’t vote for the first African American president of the United States of America. Every day I couldn’t vote, I had no say to the workings of our community.

I got my right to vote back for the second election of President Obama. And getting to walk in there with my daughter, side by side—she got to see me vote and model citizenship for her. It was powerful, the pride I felt to be able to do something I was denied for so long. It’s critical that folks understand who we are taking the vote from: What do we seek to gain from it? What do we lose by it? We lose the modeling for an household, an entire family, the entire community.

[With this election] I don’t have as much confidence as some folks, because we’ve been here before, where things are very clear about the consequences and the potential dangers. I don’t get excited about the concept of a blue wave. I’m scared that that’s not going to happen.” —Shelton McElroy, 40, associate director of operations at the Bail Project, Louisville, Kentucky

But it’s not always easy to participate

“I got convicted in 2006 and was charged with vehicular homicide, class C. It was not drunk driving. It was an unfortunate accident that I deeply regret; the person is no longer with us. Up until that, I’d always been a professional person, worked at a firm, ran a collections agency and was a private investigator—didn’t have brushes with law enforcement except for speeding tickets. I was sentenced to 10 years in prison, which was suspended, then given five years probation, and [ordered to pay] $150,000 restitution to the family. I’ve been making payments, and I still make my payments.

I knew that felons had a hard time getting jobs, I never knew how hard it was. As a felon, I lost my job because I was no longer able to meet the security requirements. On top of that, in Iowa, when our ex-governor took office, he reversed a decision that allowed convicted felons the automatic right to vote. Now the process is seemingly impossible.

Once you complete your sentence, I truly believe your citizenship rights ought to be restored, and I’m not even talking about gun rights. Without the basic right to vote, you’re basically a nonperson; you’re told that your opinion doesn’t truly matter. I was so involved in politics before my conviction: I helped campaigns, did neighborhood knocking on doors. I believe strongly in the process. Now, since my opinion doesn’t matter, I find it very hard to be motivated to help. Suffice it to say, I’d love to be politically active again—absolutely, unequivocally.

I do get involved in some respects: I happen to be involved with a good group of friends, we have great discussions, we support some candidates with contributions, if we can. And I do have hope that one day we’ll come to the understanding that once you fulfill your legal requirement, you should be able to vote. I live for that day, and I fight for that day.” —Rick Sattler, 60, road breakdown coordinator at a trucking company, Iowa