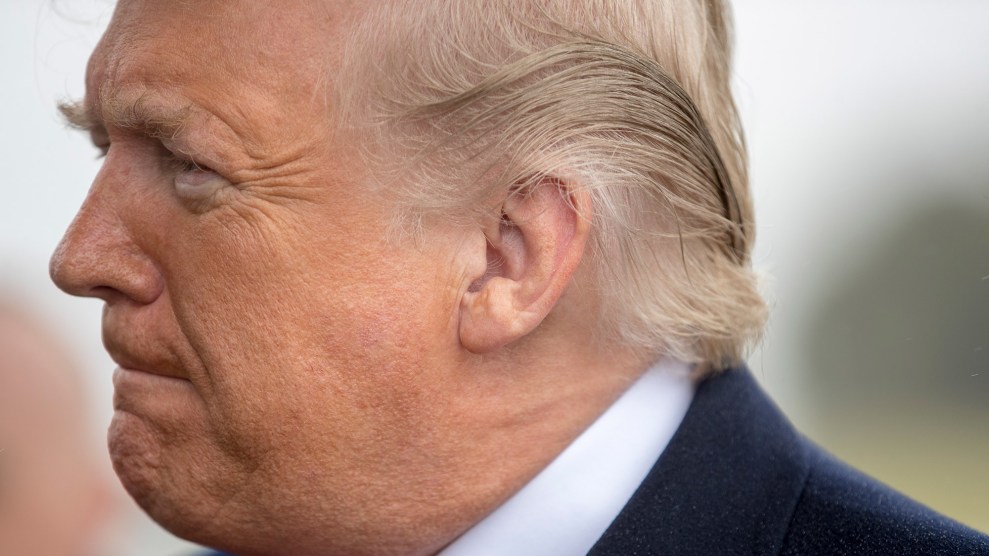 Over the last year, President Donald Trump has repeatedly emphasized the death penalty in televised speeches, statements, and tweets. Sometimes, it was invoked in reference to certain groups, like drug dealers; other times, the president applied it to a specific individual, as he did just after the Pittsburgh synagogue massacre.

Trump’s infatuation with the death penalty isn’t new. Even before his foray into politics, he tweeted about cases where he thought capital punishment would be appropriate. He called for it when Sgt. Bowe Bergdahl made headlines for being captured after he deserted his post in Afghanistan, and in the cases of the Boston Marathon bomber and the Aurora shooter. In comparison, a search of former President Barack Obama’s Twitter archive finds zero results for the words “death penalty.”

More famously, in 1985, Trump bought $85,000 in ads that called for the execution of the Central Park Five, who were ultimately exonerated through DNA evidence.

As president, Trump has clung to the death penalty as a tough-on-crime solution in specific circumstances, despite research that shows the death penalty has not deterred crime, and, in practice, is often arbitrary, racist, and imposed against innocent people.

Here’s a breakdown of how the president has discussed capital punishment in 2018:

In an address to the FBI National Academy in December 2017, Trump said, “We believe that criminals that kill police officers should get the death penalty” and was met with applause from the crowd. A year later, at a Department of Justice conference, he made a similar statement. “We will protect those who protect us…And we will believe the right punishment, and we all do, for cop-killers, is called the death penalty.”

In August, Bloomberg reported that Trump was pushing Jeff Sessions to seek a death sentence for those who sell fentanyl, a pain medication that has contributed to the nation’s vast opioid crisis. Then, in December, Trump touted a deal that he hopes will curb the supply of fentanyl from China. In a tweet, he added: “If China cracks down on this ‘horror drug,’ using the Death Penalty for distributors and pushers, the results will be incredible!”

In October, after a mass shooting at the Tree of Life synagogue in Pittsburgh left 11 dead, Trump told reporters before a campaign rally that he hopes the death penalty comes back “into vogue.”

“Anybody that does a thing like this to innocent people that are in temple or in church, we had so many incidents with churches, they should really suffer the ultimate price.” He suggested that we should “bring back” capital punishment and “stiffen up our laws in terms of the death penalty.” According to Mayor Bill Peduto of Pittsburgh, Trump called him shortly after the shooting and spoke in similar terms—calling for harsher capital punishment laws as a way to prevent such violence. Peduto was stunned, and he told the Washington Post that he quickly ended the call.

Trump couldn’t help but invoke the death penalty again when rolling out his administration’s three-part plan to address the opioid crisis in March. In a speech to announce the plan in New Hampshire, Trump said that drug dealers shouldn’t be treated “nice anymore” and recommended getting “tough on the drug dealers…and that toughness includes the death penalty.” His comments didn’t come out of the blue—the month prior, Axios reported that Trump had privately praised Singapore’s use of the death penalty for drug offenses, telling one official, “You know, the Chinese and Filipinos don’t have a drug problem. They just kill them.” By March, it was a public talking point. A few days after the New Hampshire speech, Trump called again for the death penalty for drug dealers at a stop in Pennsylvania, crediting China and Singapore for the idea. “I don’t know if this country’s ready for it,” he said. “The only way to solve the drug problem is through toughness.”

It wasn’t all bluster—Trump’s official plan to tackle the opioid epidemic reportedly included the death penalty for drug dealers.

Of course, a president’s statements on the death penalty legally amount to more than one man calling for executions on the internet.

In September 2018, the defense attorneys for Sayfullo Saipov—who, inspired by Islamic State propaganda, steered a pickup truck into a Manhattan bike path, killing eight—cited a Trump tweet from November 1, 2017, that reads, “NYC terrorist was happy as he asked to hang ISIS flag in his hospital room. He killed 8 people, badly injured 12. SHOULD GET DEATH PENALTY!” They argued that the tweet was grounds to stop federal prosecutors from seeking the death penalty because their bosses’ boss’ tweets make it impossible for a death penalty prosecution to be free of “nakedly political considerations.”

Trump’s attitude has translated to policy changes, too. In October, the Associated Press reported that Trump’s Department of Justice was increasingly seeking capital punishment—during his tenure as attorney general, Sessions approved at least a dozen death penalty prosecutions. In Obama’s early years, Attorney General Eric Holder approved similar numbers. But by 2017, the administration was reviewing lethal injection protocols and only sought the death penalty once, in the prosecution of Dylann Roof.