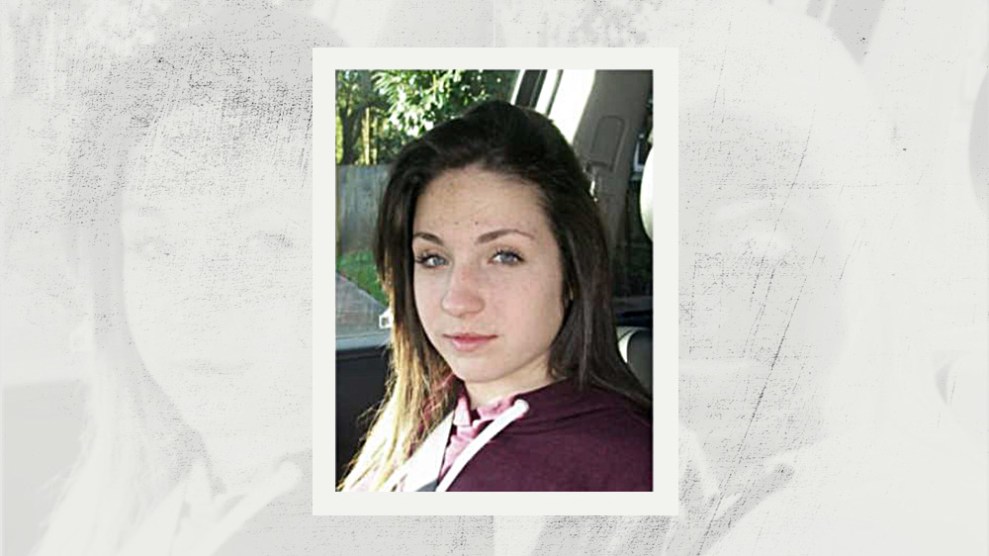 (Update 2/8/2019): On Friday, state prosecutors filed a rebuttal to Maryanne Atkins’ attorneys’ request for a nine-year sentence. In it, prosecutors allege that Atkins falsely accused Emmanuel Gondo of sexually assaulting her before she killed him. According to prosecutors, Atkins killed Gondo during a robbery, not in self-defense. Atkins’ sentencing was rescheduled Friday for sometime later this month.

When, in January, then-Tennessee Gov. Bill Haslam granted clemency for Cyntoia Brown, advocates cheered. Brown had been sentenced to life in prison for killing a man who solicited her for sex when she was 16. Her case had become a symbol for criminal justice reformers who believe minors should face life behind bars only in the rarest of circumstances—Brown had been locked up since 2004. And her clemency in January was a huge victory for the burgeoning area of scholarship that says the trauma inflicted by being sex trafficked should be considered when trying victims for crimes.

But 2,400 miles away in Seattle, a case striking in its similarity to Brown’s is unfolding: On Friday, a young woman, allegedly sold for sex as a minor, will be sentenced for the death of her abuser. Thirteen years have passed since Brown’s trial, but little, apparently, has changed.

Maryanne Atkins was 16 years old when she met Emmanuel Gondo. The 21-year-old Gondo was allegedly sex trafficking Atkins’ friend and was likely planning to do the same with Atkins, according to court documents obtained by Mother Jones. Atkins had already struggled in life. She went in and out of the foster care system beginning at age four due to a neglectful mother and a sexually abusive father, a time that included a failed adoption and a stint living with her sister. She began running away to live on the streets at 14. Prescribed an antidepressant at age 10, she attempted suicide at least three times. In February 2016, the 16-year-old Atkins awoke after drinking Xanax-laced Sprite to find Gondo having sex with her. After a struggle, she shot and killed him.

“This is a young person who is part of a group of young people who have been known to myself and service providers and advocates for a long time,” said Leslie Briner, a child sex trafficking expert in Seattle who is familiar with the case. “She has had trauma history from birth forward.”

That context, says Briner, should have been front and center in her case. A growing body of research has shown that the experience of being sex trafficked can cause trauma similar to that of torture survivors, and that this trauma, in turn, affects decision-making, especially in young people. Research published in 2017 from the University of Wisconsin-Madison pinpointed this relationship, showing that people exposed to trauma in childhood have difficulty making good decisions as adults. What’s more, a study published in 2010 by University of London researchers found that of the more than 200 European sex trafficking victims studied, 77 percent expressed symptoms of PTSD, 55 percent expressed symptoms of depression, and 48 percent expressed symptoms of anxiety.

Adding insult to injury, Briner notes, is the fact that in 2013, Washington state adopted a protocol for supporting sex trafficking survivors and recognizing the intricacies of such cases, yet no such protocol was followed for Atkins.

“She has had trauma history from birth forward.”

Yasmin Vafa, executive director of Rights4Girls, a human rights organization focused on gender-based violence, points out that trauma’s effect on the brain has been considered a valid legal defense in other types of cases. Battered woman syndrome, for example, a legal defense strategy developed in the 1990s that shows how domestic violence causes trauma, is used in cases where victims kill their abusers. That same logic should hold for victims of sex trafficking, Vafa, Briner, and other advocates say.

But, Vafa notes, such a defense has rarely been used in the case of a sex trafficking victim, and to her knowledge, has never been successful. “It took many decades to establish battered woman syndrome. The science of it, the brain data, the trauma, and the history really went a long way in trying to explain why women would act out in certain ways,” Vafa says. The research connecting sex trafficking and trauma is “still very new.”

Initially, Atkins’ defense team planned to call three expert witnesses to testify on Atkins’ state of mind when she committed the murder, as well as on her prior history of sexual exploitation—narratives the defense hoped would show that Atkins was a victim, not just a perpetrator. But in November, a judge decided not to allow the testimony, according to Briner, who had prepared detailed remarks for Atkins’ case and was expecting to testify. Facing the prospect of testifying in open court without the expert testimony, Atkins decided not to go to trial and instead pleaded guilty to second-degree murder in December.

In a brief submitted to the court before the judge made his decision to exclude the testimony, Atkins’ lawyers made the case for why it should be considered. “In assessing issues surrounding Maryanne’s culpability,” the brief, filed in November, reads, “this Court must consider the mitigating circumstances relating to her youth—including her age and its ‘hallmark features,’ such as her ‘immaturity, impetuosity, and failure to appreciate risks and consequences,’ as well as factors such as the nature of her surrounding environment and family circumstances (here, her trauma history is particularly relevant to her conduct in this case).” As the brief notes, child welfare expert Marty Beyer, mental health specialist April Gerlock, and Briner were slated to testify on how Atkins’ youth and history of trauma impacted her decision-making; how Atkins suffered from PTSD and was likely having a flashback to her sexual abuse as a child while she was being assaulted; and how she had been sexually exploited, respectively.

State prosecutors have recommended that Atkins, who was tried as an adult, get between 20 and 25 years, but the murder charge carries a potential life sentence. Since she was arrested in February 2016, Atkins has been detained in county jail on a $1 million bond.

Back in 2006, when Cyntoia Brown was sentenced to life behind bars, little was known outside of academia about how trauma impacts decision-making, especially in young people who, as research has shown, are much more prone to act without considering the consequences. To the jurors in Brown’s trial, it seemed like a black-and-white murder case, and although her defense team argued that she was forced into prostitution, she wasn’t portrayed as a victim impacted by trauma. At the time, many states and some law enforcement considered juveniles selling sex equivalent to prostitutes breaking the law (even though, as minors, they couldn’t consent to sex) rather than victims of sex trafficking.

Brown didn’t stand a chance, but advocates are hopeful Atkins might.