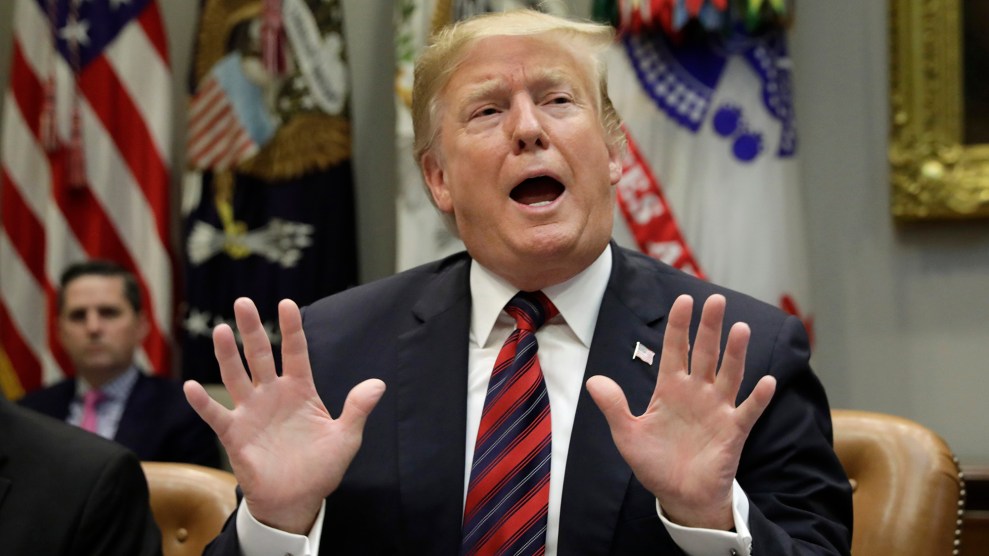 Earlier this week, President Donald Trump released his administration’s budget request for the 2020 fiscal year, asking Congress for a record $4.75 trillion in funding. Somewhat predictably, he proposed boosting military spending and allocating billions of dollars for a wall along the US-Mexico border. But the president’s request would appropriate surprisingly little to fund one of the precious few bipartisan victories of his term, a criminal justice reform law that he signed in December.

While the move will likely have little practical effect, since the budget proposal is basically dead on arrival, it’s yet another example of the Trump administration appearing to deprioritize a major piece of legislation that the president and his senior adviser and son-in-law, Jared Kushner, have repeatedly and vocally championed.

The First Step Act—the first major criminal justice reform bill to pass Congress in about eight years—includes an array of federal prison and sentencing reforms, from curbing some mandatory minimums to creating more educational, job training, and rehabilitative programs for inmates. “This will keep our communities safer, and provide hope and a second chance, to those who earn it,” Trump tweeted after it passed the Senate in December last year, and he later invited formerly incarcerated people to his State of the Union address in January to tout the reforms. But as the Marshall Project points out, the law calls for $75 million in funding per year for five years, starting in 2019. And while Trump’s proposed 2020 budget requests hundreds of millions of dollars for existing reentry programs, it only allocates $14 million to develop the First Step Act’s new programs, far short of the amount specified in the law.

Of course, the president’s budget request is just a request—Congress will still determine actual spending levels—but it’s still a strong indication of his priorities heading into the 2020 election. And for supporters of prison reform, it’s an alarming signal that his administration isn’t serious about fully implementing a law that could improve life for thousands of inmates and help many of them reduce their sentences. In the past, lawmakers have rejected Trump’s budget proposals, and they may decide to allocate more money to fund the First Step Act this year. But their track record isn’t great either: For the 2019 fiscal year, they didn’t budget any funds for the new law.

None of this necessarily means the First Step Act won’t get funded; it’s just unclear exactly how. The Justice Department could shift resources from other areas to implement the law, or it could use prison savings that result from the earlier release of certain inmates. “The Administration is committed to breaking this cycle of recidivism by better preparing individuals to reenter communities and to mitigating the collateral consequences of incarceration,” the budget request says. The White House did not respond to the Marshall Project‘s questions about funding for the law.

The budget request isn’t the only administration move raising alarm. Many of the law’s supporters, including federal inmates and prison reform advocates, believed it would allow about 4,000 people to get out of prison quickly because of their good behavior in lockup. But as I reported in February, after the law passed, the Federal Bureau of Prisons announced these well-behaved inmates could have to wait roughly seven months for the reforms to kick in, if not longer. “We know that inmates and their families are particularly interested in the changes regarding good conduct time,” the agency said in a statement to Mother Jones. But “it is not effective immediately nor is it applicable to all inmates.”

And for all Trump’s talk of helping formerly incarcerated people reenter their communities and find jobs, the federal government in some ways appears to be moving in the opposite direction—essentially ignoring the spirit of the First Step Act. Earlier this month, the Marshall Project reported that the US Office of Personnel Management wants to expand criminal background checks for applicants of federal jobs and contracting positions, requiring them to disclose not only if they’ve served prison sentences, but also if they’ve spent time in jail or gone through diversion programs. It’s just a proposal for now, and the public has until late April to submit comments on the idea. “Our pledge to hire American includes those leaving prison and looking for a very fresh start—new job, new life,” Trump said last November while announcing his support for the First Step Act, which doesn’t deal with hiring practices for ex-offenders but was advocated by lawmakers and the president as a way to help prisoners find employment after their release.

Taken along with the 2020 budget request, the administration’s proposal to expand background checks for federal job applicants is yet another reason for criminal justice reform advocates to wonder how sincere the president really is about offering a second chance to people in federal prisons.