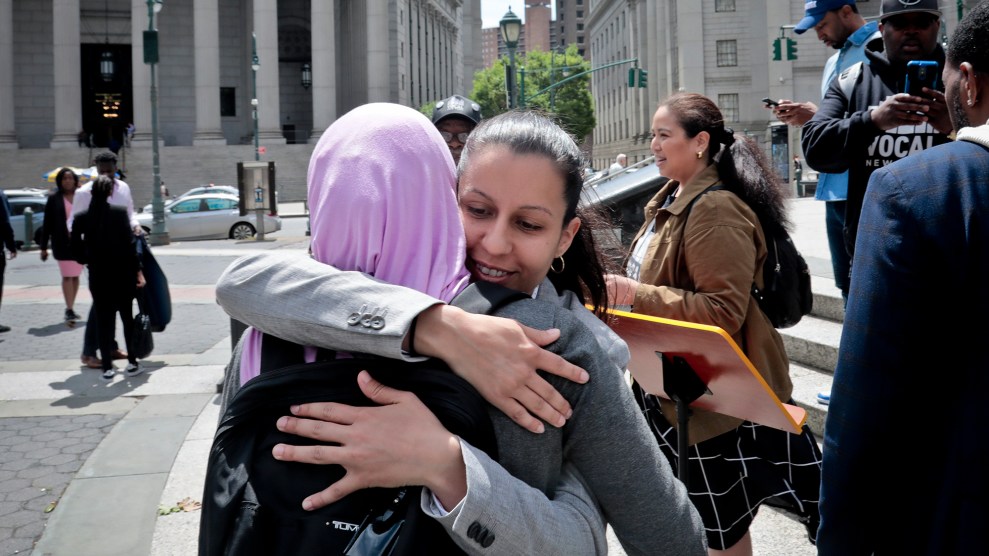 Queens District Attorney candidate Tiffany Cabán embraces a supporter on June 11 after a press conference of civil rights activists calling for an investigation into the false conviction of the Central Park Five. Bebeto Matthews/AP

Update, 11:30 p.m. ET: Tiffany Cabán has declared victory in the primary election for district attorney in Queens. With 99.5 percent of precincts reporting, Cabán, the only public defender in the race, led by 1.3 percent over Melinda Katz, the Queens borough president and a former Assembly member. “I am so humbled and so proud to be standing with my Queens family today,” Cabán said. “They said we could not win. But we did it, y’all.” Katz has not conceded, telling supporters it could be days before the final results are known and saying there would be a recount.

When Tiffany Cabán, a New York public defender, decided to run for district attorney in Queens last fall, it seemed like a long shot. At 31, she was the youngest candidate by at least a decade, and one of her opponents already had $1 million in campaign funds. Several other contenders were former prosecutors, a more typical pedigree for the position. Cabán had spent her career working on the opposite side of the courtroom, defending people too poor to pay legal fees. She didn’t like the idea of incarcerating anyone at all.

But as Queens goes to the polls today to choose a Democratic nominee for district attorney—an election that’s considered to be one of New York’s most important this year—her long-shot race now seems tantalizingly possible. In a crowded field of candidates, Cabán, the daughter of working-class Puerto Rican parents, has emerged as one of the frontrunners, with some of the country’s best-known politicians backing her bid. Rep. Alexandria Ocasio-Cortez campaigned with her at the gay pride parade in Jackson Heights earlier this month. Sens. Bernie Sanders and Elizabeth Warren endorsed her last week, as did the New York Times editorial board. Under Queens’ former district attorney, Richard Brown, who held the position for decades and passed away in May, the office regularly took people to court for minor offenses like marijuana possession and fare evasion that other district attorneys had started to ignored. Ocasio-Cortez said in a statement: “If Tiffany Cabàn wins, things are going to change.”

In some ways, a victory for Cabán would be reminiscent of Ocasio-Cortez’s own upset over Rep. Joe Crowley in their race for Congress last year—another grassroots insurgent toppling a leader of New York’s Democratic machine. One of Cabán’s main opponents is Melinda Katz, the Queens borough president and a former Democratic Assembly member, who is endorsed by Gov. Andrew Cuomo and Crowley himself.

But as of late May, Cabán had “more individual donations than the other six candidates combined,” according to the Queens Eagle—a total of 2,545, compared with Katz’s 300, with donations pouring in from more than a dozen states and even internationally. (The other candidates are Greg Lasak, a former Queens Supreme Court judge and county prosecutor, along with Mina Malik, Jose Nieves, and Betty Lugo, who have all worked as prosecutors; the sixth candidate, City Councilman Rory Lancman, dropped out.)

We’re just a couple of girls, standing in front of a borough, organizing them to dismantle the carceral state. 😉

If you live in Queens and can vote, vote TOMORROW for @CabanForQueens! (Set yourself a reminder🤳🏼)

If you can’t vote, find a voter and send them to the polls. pic.twitter.com/wWEpp3wdW8

What makes Cabán so appealing to progressives? Most candidates in the race have positioned themselves as reformists and forward-looking—by and large, they’re against cash bail and a surge of immigrant arrests, and in favor of closing the jail complex at Rikers Island and prosecuting fewer broken-windows offense. But Cabán, the lone public defender, goes a step further and describes her platform as “decarceral”—she wants to avoid jailing people as much as possible. Back in March, I wrote more about her ideas for reform, which were inspired partly by her family history:

Cabán was born in Queens’ Richmond Hill neighborhood…Her dad, an elevator mechanic, and her maternal grandfather, an immigrant and military veteran, both struggled with alcoholism, something that later shaped her view of the courts and incarceration. During his worst years, she says, “my grandfather was incredibly physically abusive, to the point where my grandmother left him and my mom dropped out of high school to help support the family. But the man I got to know was this kind, patient, loving abuelo.” As she got older, it bothered her that the criminal justice system didn’t take into account these kinds of complexities. “The current system does not look at a man like my grandfather—a dirt-poor kid from Puerto Rico and a Purple Heart recipient from his service during the Korean War who self-medicated with alcohol—and ask, ‘How have we failed him and how can we now support him?’” she wrote recently. “I always ask that question.”

After graduating from New York Law School, Cabán took a job as a public defender at the Legal Aid Society and later the New York County Defender Services. She soon grew frustrated that many of the people she saw prosecuted and jailed for nonviolent crimes were mentally ill or desperate, and when they were pulled from their housing, jobs, and family, they were further destabilized. In her campaign for DA, Cabán pledges not to charge people for a slew of crimes like drug possession and fare evasion.

And in a stance that sets her apart from her competitors, Cabán would also decline to prosecute sex workers and their clients. In New York, arrests for loitering for prostitution jumped 180 percent from 2017 to 2018, with roughly half of those occurring in Queens, suggesting that sex workers in the borough, especially women of color, are at increased risk of being targeted by law enforcement. Several other candidates have pledged not to prosecute sex workers but to continue charging customers—a tactic that Cabán argues would still drive sex workers underground and make them vulnerable.

Cabán also opposes the city’s plan to build or expand jails in four boroughs as a replacement for the eight jails on Rikers Island, which are slated for closure by 2027. “Every time new jails are built throughout this country’s history, they are filled—and overcrowded,” she explains on her website. Queens already has a dormant jail facility that the city wants to make bigger. Cabán thinks this is unnecessary and that the DA’s office should reduce the inmate population by declining to request bail and investing more in community-based services that would be available before offenders are charged or even arrested, no strings attached. She wants constituents to decide how to spend some of the DA office’s budget, particularly the $100 million it has gotten from federal civil asset forfeiture, ideally funneling it to hospitals, schools, job training, and affordable housing for people accused of crimes. “We need to divest from the DA’s office and invest back in our community-based organizations—to do everything we can to prevent initial contact with the criminal justice system in the first place.”

These ideas helped Cabán snag endorsements away from Lancman, who tried and failed to make a lane for himself as the most progressive of the group. The first to enter the race, with $1 million in funding, Lancman described himself as the “Larry Krasner of Queens,” referring to the Philadelphia district attorney elected in 2017 on a platform of reducing mass incarceration. And he had support from Gwen Carr, the mother of Eric Garner, whose killing by New York police in 2014 set off a wave of protests. But Krasner ended up backing Cabán and campaigning with her. (Carr now also endorses Cabán.)

So does the local branch of the Democratic Socialists of America, a group that helped Ocasio-Cortez win her election in the Bronx. Cabán also secured endorsements from Akeem Browder, whose brother Kalief killed himself in 2015 after he was locked up for three years at Rikers as a teenager for a minor theft charge that never went to trial; and from Yusef Salaam, an exonerated member of the Central Park Five. On Friday, Lancman announced that he lacked enough votes to win and was dropping out of the race to support Katz, the Queens borough president, though he had been critical of her more moderate positions during the campaign and said he was philosophically in agreement with more of Cabán’s platform. “But being the District Attorney is not a philosophy class,” he reportedly said. He argued Cabán lacked enough experience to handle the job and did not have enough support among constituents.

Whoever wins the primary is likely to win the election in November. In an attack ad, Katz, a career politician who has never worked as an attorney in criminal court, describes Cabán as “too extreme and unqualified,” and criticizes her for thinking “we can ‘rehabilitate'” people who commit violent crimes.

Cabán counters that she’s defended more than a thousand indigent clients as a public defender. “I’m a queer Latina from a working class family—people like us are exactly who the system is trying to keep down,” she says in a recent campaign video. And that’s important, she says. As she put it months ago, quoting Massachusetts Rep. Ayanna Pressley, “Those closest to the pain should be closest to the power.”