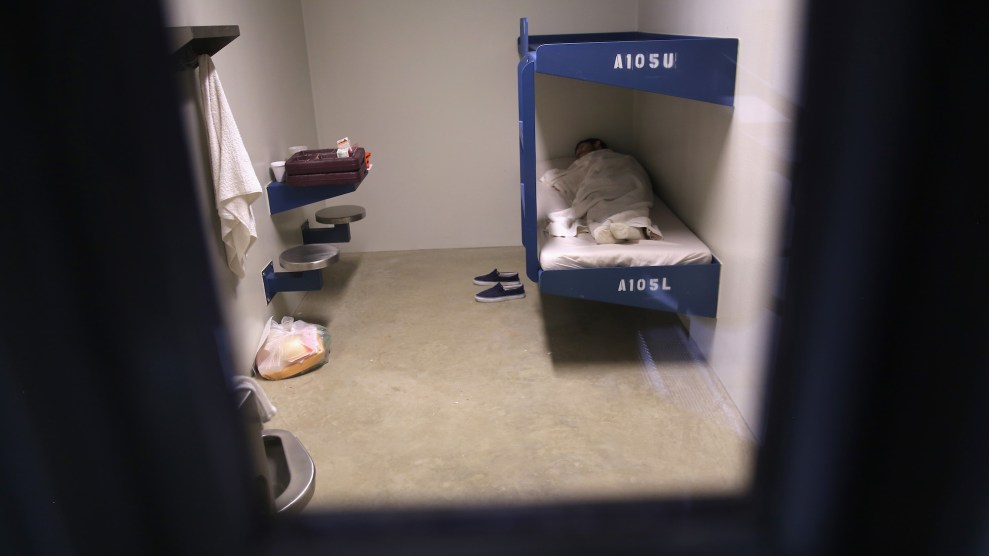 Early one morning, Abdiaziz Karim was sleeping in his new dorm in an Immigration and Customs Enforcement (ICE) detention center when an officer woke him up. The guard pointed out graffiti on the wall and a light fixture smeared with toothpaste, and demanded that Karim, a Somali waiting for an asylum hearing, clean them. When Karim protested, the guard got angry.

“He said to me he would write me up, or I’m going to go to segregation or if I don’t clean this, it will affect my case,” Karim recalled during a deposition he gave last month as part of a lawsuit against GEO Group, the private prison company that operates the detention center in Adelanto, California. So he cleaned the wall. “Because I realize that if I don’t do those things, it will affect my case. I was not going to get bond. I was not going to get released.”

Since 2014, a series of lawsuits filed in federal courts from Washington to Georgia have collected similar allegations of coercive labor practices inside for-profit immigration detention centers run by GEO and its main competitor, CoreCivic. The lawsuits claim that the companies that operate the detention centers are violating minimum wage, unjust enrichment, and antislavery laws by coercing detainees to work for free, or, in some cases, $1 per day, by threatening them with punishment and depriving them of basic necessities. These cases have the potential to undercut GEO and CoreCivic’s profits from ICE detention, which accounts for about a quarter of their revenues, according to SEC filings. Northwestern University political science professor Jacqueline Stevens estimates that in 2012, savings from detainee labor accounted for approximately a quarter of each company’s net profits.

Karim, who spent two years in Adelanto before losing his asylum case and being deported to Somalia in August, is one of a group of former detainees who have brought a class-action lawsuit against GEO Group for allegedly profiting off “a readily available, captive labor force.” Last Tuesday, a federal judge in California allowed the lawsuit to proceed as a national class action, with Karim and his three co-plaintiffs representing the tens of thousands of detainees who have been locked up in GEO facilities since 2007. Andrew Free, a Tennessee-based attorney representing the detainees, none of whom are still in detention, welcomed the ruling as a breakthrough. “For the first time, everybody who’s locked up in a GEO immigration prison, and who’s subject to the allegedly illegal policies, now has someone that they can look to as a voice, to bring their own treatment to light,” he says.

Detainees say refusing to do work may result in loss of recreation or telephone time,  solitary confinement, pepper spray, and other uses of force.

If the detainees win their lawsuit, GEO could be forced to eliminate the Housing Unit Sanitation Policy that allegedly exists in nearly all its immigration facilities. The detainees says theses policies require detainees to perform “a wide range of completely uncompensated work for the company’s enrichment”—including cleaning “walls, bathrooms, showers, toilets, microwaves, furniture, windows and floors.” While some housekeeping may be required under the federal standards that are written into GEO’s contracts, those tasks are supposed to be limited to making beds, “stacking loose papers,” and keeping the floor, bunks, and fixtures clear of loose items. But according to the lawsuits, detainees who refuse to do extra cleaning may face punishments ranging from loss of recreation or telephone time to solitary confinement, pepper spray, and other uses of force.

According to the Adelanto Supplemental Detainee Handbook, which is distributed to everyone booked into the facility, refusing to clean one’s living area is considered an offense of “high moderate” severity, punishable by “disciplinary restriction up to 72 hours” or even criminal prosecution. In his deposition, Karim recounted multiple times that GEO guards confiscated his property or threatened him with solitary confinement for refusing to clean the dorm on demand. Once, he alleges, a GEO guard locked him in a room for hours when he refused to clean the intake area where he had just signed deportation paperwork.

The detainees argue that GEO is violating the Trafficking Victims Protection Act, which prohibits forced labor. In court documents, GEO’s lawyers have claimed that no detainee was ever placed in solitary confinement for failing to work, and that the company’s sanitation policies do not violate the requirements of their contracts. The company may appeal the judge’s decision to authorize the lawsuit as a class action. The case is scheduled to proceed to trial next year.

If the detainees can convince a judge or jury that GEO’s sanitation policies have broken the law, they hope the company will be ordered to start paying detainees for their labor. The detainees are also taking aim at Adelanto’s Voluntary Work Program, in which GEO pays detainees between $1 and $4 per day for kitchen, laundry, janitorial, or maintenance jobs. The program is “not voluntary in any meaningful sense,” the detainees argue, because working is the only way to pay for food, water, hygiene products, and other basic necessities they claim GEO withholds under a “deprivation policy.” And they aren’t aren’t always paid for their work. GEO denies that detainees are deprived of necessities, arguing that its ICE-approved work program is “strictly voluntary.”

As the lawsuits progress, the issue of detainee labor has drawn the notice of the US Commission on Civil Rights as well as Sen. Elizabeth Warren (D-Mass.). In July, Warren asked the Department of Homeland Security’s acting inspector general to investigate whether detention centers use the threat of solitary confinement to coerce detainees to participate in the Voluntary Work Program.

The costs of fighting immigration detainees’ lawsuits are piling up for the private prison companies. According to documents obtained by Stevens, GEO executives have repeatedly asked ICE for taxpayer money to pay their legal bills. Continuing to fight the lawsuits would cost between $15 million and $20 million, CEO George Zoley wrote in a letter to ICE last year. If the company lost one suit, it could be on the hook for “tens of millions” more in damages—a “potentially catastrophic risk” to its immigration detention operations, as GEO lawyers put it in one court filing. The federal government has declined to chip in.