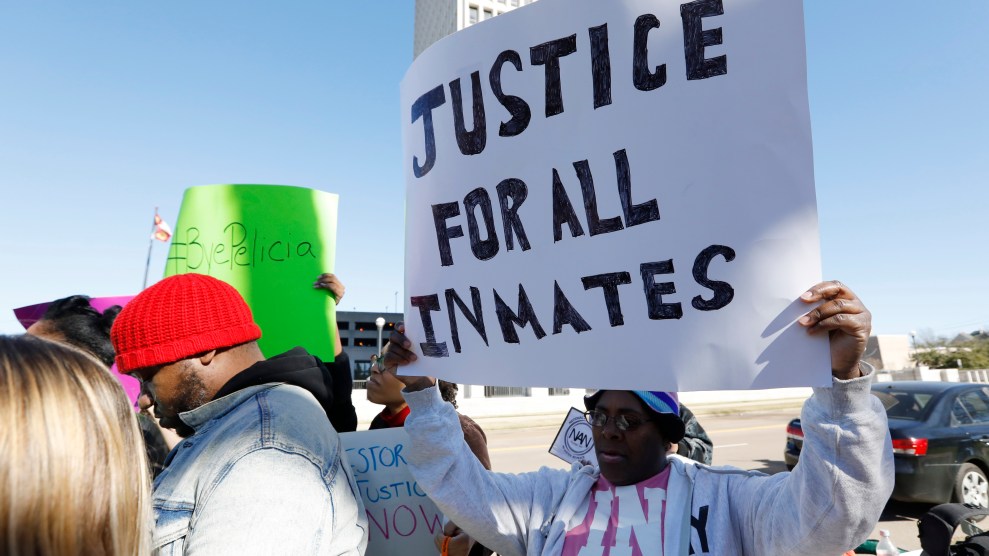 A protest about prison conditions outside the Capitol in Jackson, Mississippi, on January 7Rogelio V. Solis/AP

Mississippi prisons are in crisis. On Tuesday, a congressman called for a federal investigation after at least five people incarcerated in the state were stabbed or beaten to death during a week at the start of the year. A county coroner, overwhelmed with bodies, said prison gangs “are at war.” After rioting, the corrections department began a statewide lockdown, but two inmates at Mississippi State Penitentiary at Parchman, the state’s highest security lockup, escaped. They were later caught, and the lockdown has been lifted at some facilities.

But the chaos is far from over: Videos and photos, shot by inmates with contraband cellphones, have leaked and spread across social media. They appear to reveal flooded floors, a fire, and walls stained with blood. “I can barely breathe,” the mother of one incarcerated man at Parchman prison told the Clarion Ledger. “My son is in danger and there’s nothing I can do.”

The recent violence began on December 29, when Terrandance Dobbins was killed in what the corrections department described vaguely as a “major disturbance” at South Mississippi Correctional Institution, and two other men there were injured. On New Year’s Eve, the lockdown began, and the department’s commissioner announced her resignation. During the first several days of the year, four more men were beaten or stabbed to death, including three at Parchman. For context, that’s almost the same number of people killed at Parchman during the eight years prior. “Things are kind of surreal at this point,” coroner Heather Burton told the Clarion Ledger of the recent deaths. “Every time the phone rings at this point, it’s another one.”

“Incarcerated individuals are left to themselves to fight for control of the facilities.”

In Congress, Mississippi Rep. Bennie Thompson, a Democrat, has asked the Justice Department to launch an investigation into the state’s prison system, which incarcerates about 20,000 people. In a 23-page letter to Assistant Attorney General Eric Dreiband, he and reps from civil rights groups wrote that “rampant overincarceration” and “acute understaffing” had resulted in “brutal, foreseeable, and preventable deaths and injuries as the incarcerated individuals are left to themselves to fight for control of the facilities.”

The letter described a video reviewed by the Southern Poverty Law Center that appeared to show maximum-security inmates at Parchman who were transferred after the killings to the facility’s Unit 32, which was closed down a decade ago because of poor conditions: The video, below, seems to show flooded floors, black mold, and paint coming off the walls. “This motherfucker been condemned 10 years, man,” an inmate with striped red-and-white pants says, stepping through the water. “And they just up and put us in here.” Thompson and the civil rights groups received reports of no running water or electricity in the unit, which they said was holding between 100 and 500 men. The corrections department disputes that conditions are so dire; Unit 32 “is structurally sound and not condemned,” the agency told the Associated Press.

How did things come to this? These killings didn’t spring out of nowhere. One of the main problems is severe understaffing: The number of correctional officers in Mississippi has plummeted in recent years. That’s partly because, compared with other states, Mississippi pays one of the lowest salaries: At state-run prisons, entry-level correctional officers start at about $24,900 a year, Rep. Thompson points out, which falls below the federal poverty line for a family of four. The low pay, combined with the stressful environment, has led to high turnover, forcing inexperienced guards to work nearly constant overtime. At the end of 2019, Mississippi’s state-run prisons had just 732 correctional officers—fewer than half the number from five years ago, according to the Clarion Ledger. At each state-run prison, the ratio of staffers to prisoners is worse than in Alabama, where federal investigators recently said understaffing had led to cruel and unusual punishment.

With so few guards, prison gangs have taken control of some Mississippi prisons, as the Marshall Project found in a recent investigation. At Wilkinson County Correctional Facility, a privately run prison, an audit revealed that the warden cooperated with gang leaders in a bid to keep control of the facility. At Southern Mississippi Correctional Institution, Thompson wrote in the letter, gangs reportedly “assign people to cells and beds, overriding the formal MDOC assignments; control access to phones; photograph prisoners using contraband cell phones to create and maintain unofficial databases; determine when and where individuals may eat and shower, and enforce fines against those who break gang-written rules.” In a federal lawsuit about violence and poor conditions at East Mississippi Correctional Facility, also privately run, the correctional department’s court monitor declined to testify in open court for fear that gang members might retaliate, Thompson added. In January, the department’s commissioner, Pelicia Hall, stated that understaffing had created a “pressure cooker type situation” at the three state-run prisons, including Parchman.

All of this comes after Mississippi enacted criminal justice reforms in 2014 to reduce its prison population. The reforms earned praise from President Donald Trump, who in 2018 held up the state as a model. But things didn’t go as planned. The prison population fell initially but then started increasing again, and today Mississippi still has the nation’s third-highest incarceration rate.

The state did save more than $40 million from the reforms, according to Commissioner Hall, but that money didn’t get reinvested into the prison system; instead it went into state coffers and helped pay for things like corporate tax cuts. “In the last five years, Mississippi’s spending on its correctional system has fallen dramatically,” Thompson and the civil rights groups wrote. It’s dropped $185 million.

With fewer funds, Mississippi prisons are practically crumbling in disrepair. At Parchman, holes riddle the walls and prison doors, ceilings are collapsing, and roaches and rats run throughout the facility, according to a recent investigation by ProPublica and the Mississippi Center for Investigative Reporting, which reviewed Department of Health inspections. Many incarcerated people go about their days in the dark, since hundreds of cells now lack lights or power—a sharp decline in conditions compared with seven years ago, when all cells had electricity and lighting. Today, one building had just one shower for more than 50 prisoners, who described going weeks sometimes without a chance to wash, according to the investigation.

Commissioner Hall, who will leave her position later this month, has asked state lawmakers to approve a budget increase that would allow prisons to pay guards more and fill extra positions. But in December, the Mississippi Joint Legislative Budget Committee recommended a budget decrease. The legislature, sworn in this week, will make the final decision.

In the meantime, on Thursday the corrections department announced it was transferring a few hundred inmates from the state-run Parchman to a private prison, Tallahatchie County Correctional Facility, because it doesn’t have enough guards to keep them safe. Tallahatchie is operated by CoreCivic, one of the country’s biggest private correctional companies, which has seen profits soar under the Trump administration. CoreCivic expects to earn more than $2 million to house the new prisoners for the first 90 days.