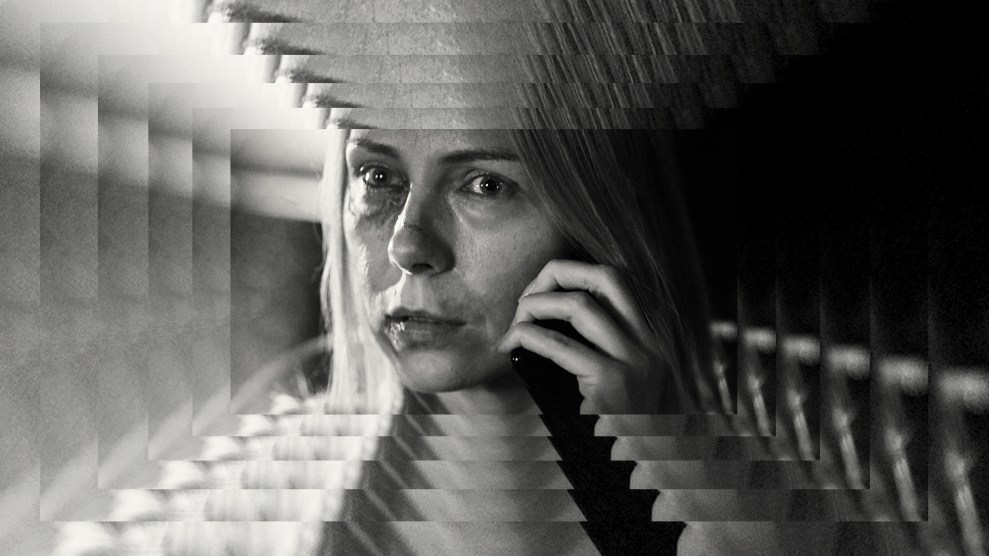 For weeks, experts and advocates have been raising alarms that the coronavirus outbreak could be disastrous for people in abusive relationships. With nearly three in four Americans being asked not to go out, more victims are isolated in unsafe homes. Abusers may be aggravated by mounting financial pressure and stress. And domestic violence organizations are already strained by social distancing requirements.

Barbara Paradiso, director of the Center on Domestic Violence at the University of Colorado-Denver, says the current moment “feels almost like a petri dish for the levels of violence to increase within family relationships.”

Data from police departments and local news coverage from around the country suggests that these concerns are justified. Mother Jones has identified 13 cities and counties that have reported increases in emergency calls to 911 or domestic violence hotlines over the past month. Several places have seen double-digit increases:

Law enforcement in Salt Lake City; Charleston, South Carolina; and Collier County (which includes Naples), Florida, have also reported upticks in domestic violence calls. During the week that Californians were ordered to shelter in place, domestic violence calls to police in Fresno, went up by more than 50 percent before returning to normal the following week. Some local domestic violence hotlines are reporting a spike in call volume too, including those in Philadelphia, Cincinnati, Austin, and Charlotte.

Some cities, including Los Angeles, Miami, and Denver have had no notable increases in domestic violence call volume in recent weeks. In East Baton Rouge, Louisiana, there was a downturn in calls. Ruth Glenn, the president of the National Coalition Against Domestic Violence, points out that police data is not a perfect gauge of whether domestic violence is getting worse. More 911 calls could indicate more violence, but they also could indicate greater trust of local law enforcement during times of crisis—or, simply, more neighbors overhearing arguments or disturbances. “My concern is victims that don’t report,” Glenn says.

It’s still early in the coronavirus crisis, and domestic violence tends to escalate as people spend more time in close quarters. In Seattle, most of the 911 calls were for “disturbances”—arguments that did not lead to arrests or criminal charges. With time, Glenn says, “we may see an escalated type of domestic violence calls being made: threats with guns, ‘he strangled me,’ that kind of thing. Abusers escalate.”

“You’re sentencing victims and their children to being 24/7 with their abuser.”

Isolation is already a well-known tactic of domestic abusers. But now, quarantines and shelter-in-place orders meant to protect public health may be fueling abusive relationships. With families being urged or required to stay home, “essentially, you’re sentencing victims and their children to being 24/7 with their abuser,” Paradiso says. “And that can be a terrifying prospect.” And because many workplaces are closed and visits to family and friends are off the table, many of techniques survivors rely on to deescalate tensions at home have vanished. So have the safety plans many survivors make to escape their abusers during violent episodes. “If things are beginning to get too hot, then they go visit mom for a while,” Paradiso says. “Or, when their partner is away at work for eight hours, the chances of things being able to deescalate are much higher.”

Advocates on the ground report that abusers are using social distancing as a means of exerting control over their partners and victims. Twahna Harris, an advocate for survivors in Baton Rouge, Louisiana, has been taking calls from victims who say the coronavirus has already intensified the fear and controlling behavior they live with on a daily basis. One woman who called Harris’ nonprofit, The Butterfly Society, wasn’t able to go to the grocery store to get essential supplies for her family because her husband controlled all their money. Another, a teacher stuck at home because schools are closed, said her partner demanded to review the receipt when she left the house to shop. “He looks over the receipt, what she’s paid, what time did she leave home, how long it took her to make it to Walmart, if the timeline adds up,” Harris says. She recalls the teacher telling her, “I am enslaved to him.”

Over the last few weeks, Paradiso has heard stories of injured victims who would not go to a hospital for help because the were afraid of becoming infected with the coronavrius. She’s also heard of abusers threatening to expose their partners to the virus by kicking them out of their homes. Abusers may weaponize fears of contagion by withholding medical supplies or hand sanitizer from their victims, reports the National Domestic Violence Hotline. “An abusive partner will use any tool in the toolbox to exert power and control,” says Crystal Justice, the hotline’s communications officer.

On top of all of this, financial insecurity can increase aggression in abusive relationships, according to Paradiso. Uncertainty around money, or job security, or ability to make the next rent payment or put food on the table—all of this stress adds fuel to the fire. “Any time that somebody who chooses to use violence experiences heightened levels of a lack of control in their lives, the tendency for violence escalates,” Paradiso says.

Politicians are urging victims to leave their homes if they’re facing abuse. “I can’t stress enough: you do not need to stay in your home in a dangerous situation,” said Minnesota Gov. Tim Walz during a Monday press briefing. “There are places of sanctuary for you to get out of that.”

But domestic violence shelters are in a tough spot, simultaneously facing increased demand in some places and the need observe social distancing guidelines. Some organizations have reduced their bed count or sent survivors to motels.

Many, like Charlotte’s Safe Alliance, have asked for donations to help with increased costs for food and cleaning. Last week, two dozen US senators sent a letter to the Department of Health and Human Services urging the Trump administration to ensure that domestic violence organizations, many of which receive federal grants, have the “flexibility, resources, and information” needed to help survivors and their families during the pandemic.

“I can’t stress enough: You do not need to stay in your home in a dangerous situation.”

In the absence of other options, some advocates are suggesting that victims stay in cars or trailers. Harris has been telling people who can’t or won’t leave their homes to find safe spaces like closets, attics, or bedrooms with a lock, where they can take a few minutes alone to unwind. She encourages them to reconnect with family or friends digitally if they can, or plan a trip to the grocery store with a neighbor.

Harris also knows the mental and physical toll that social isolation can take on someone living with abuse. She’s been through it herself, with a former partner who threatened to kill her if she left him. She was eventually able to escape with help from her boss. It’s not difficult for Harris to imagine how the current situation might have exacerbated her former partner’s attempts to control her. “If I was where some of these victims are right now, with my ex-abuser,” Harris says, “I don’t think I would have made it.”

Despite the new constraints facing many survivors and the organizations that serve them, experts and advocates resoundingly encourage those in abusive relationships to reach out for help. “I think the most important message to get out there is that people should call,” Paradiso says. “Call 911 if you’re in fear.”