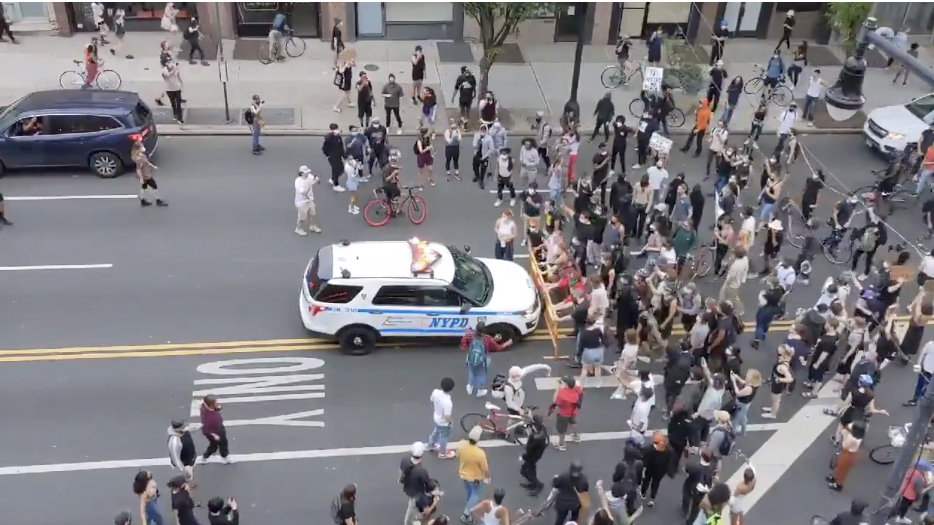 After another day of mass protests across the country over the police killing of George Floyd, one image stands out above all the rest: a video of a police van plowing through a throng of protesters in New York City Saturday night. It seemed to confirm everything the protesters were saying about police brutality.

Here is the overhead… pic.twitter.com/US6Qqhkz3O

The incident was just one instance of many around the country where the police seemed to be doing more to inflame an already dangerous situation than to defuse it. But at a press conference Sunday morning, New York Mayor Bill de Blasio addressed the incident as an outlier in a night in which NYPD officers largely exercised “tremendous restraint” in dealing with the protesters.

“I don’t to ever want to see that again,” he said of the video, while announcing an investigation into the events of the past few days. At the same time, he declared the events of the past two days proof that his efforts to reform a troubled police department and retrain officers in de-escalation tactics was working. “It says something about New York City,” he said. “It says something about NYPD that, thank God, there was no loss of life….We saw tremendous restraint from the NYPD. I watched video after video after video of officers having projectiles thrown at them,” he said. “I saw officers with teeth knocked out. I saw officers spit at. Yet the vast majority of officers stood restrained and took it. They did not allow themselves to be provoked. I challenge any civilian to stand there for hours and hours and take that.”

As for the police vehicle plowing through a crowd of protesters, he told a reporter, “That’s not the way things are supposed to be. But do not present only one side of the story. I saw people throwing things at the vehicle. Let’s not kid ourselves. That’s not peaceful protest.”

This largely echoes what the mayor said late Saturday night, when he noted that the video “is upsetting, and I wish the officers hadn’t done that,” but that the officers “didn’t start this situation. The situation was started by a group of protesters converging on a police vehicle, attacking that vehicle.”

Running SUVs in crowds of people should never, ever be normalized. No matter who does it, no matter why.