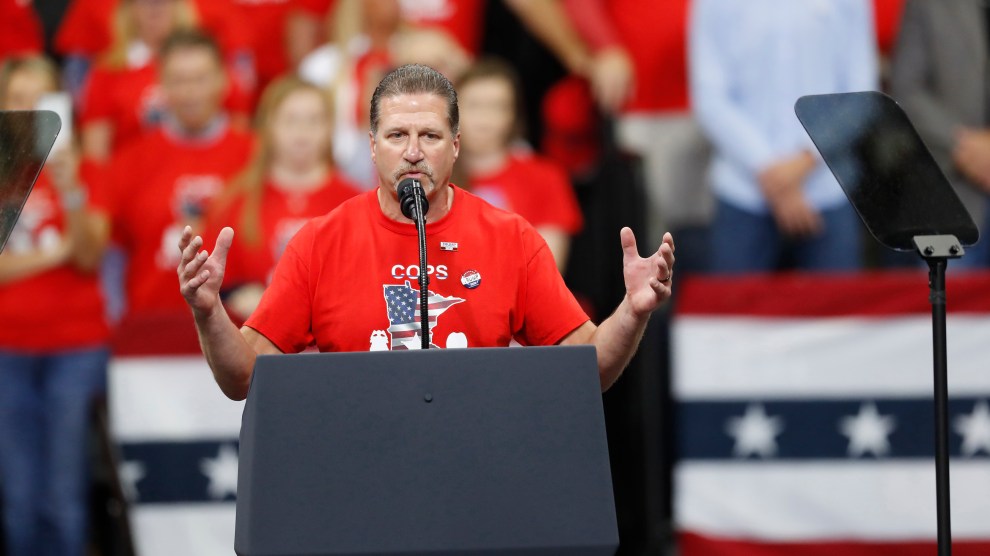 Lt. Bob Kroll, president of the Police Officers Federation of Minneapolis, at a Trump rally in Minneapolis.Richard Tsong-Taatarii/Star Tribune via AP

In December, a couple of months after Lt. Bob Kroll, the head of the Minneapolis police union, stood onstage with President Donald Trump at a campaign rally and praised the “wonderful president” for “everything he’s done for law enforcement,” he received a short Facebook message from a disgruntled city resident: “Nazi piece of shit,” the man wrote to him.

Kroll fired off a reply, pointing out his family’s record as defenders of the Allied forces during both World Wars, and then launching into a series of insults: “Keep spewing uniformed [sic] shit from your computer in your moms [sic] basement, loser,” he wrote to the man, according to a report by the Minneapolis City Pages, a local newspaper. “If you hate me so much, why don’t you stop by and beat the shit out of me?…My bet is it won’t happen, because you are a cowardly cunt.”

It might not have been the response you’d expect from a public official who represents 800-plus rank-and-file police officers. But Kroll, who has led the Police Officers Federation of Minneapolis for five years, has a reputation for inflammatory remarks. Now, his brash leadership and influence over the police department’s culture are in the spotlight amid protests over police violence in the city after George Floyd’s death at the hands of a white officer on Monday.

“Now is not the time to rush to judgment and immediately condemn our officers,” Kroll said about Floyd’s death.

As Minneapolis Mayor Jacob Frey calls for reform and the district attorney files criminal charges against the officer, Derek Chauvin, activists are demanding changes to a department they say has long been plagued by racism and misconduct. Kroll, who has been accused of using excessive force and making racist remarks in the past, is standing behind his colleague as the public backlash mounts. “Now is not the time to rush to judgment and immediately condemn our officers,” he said on Tuesday, before the department fired Chauvin and three other officers who did not intervene in Floyd’s death.

The Police Officers Federation of Minneapolis union became powerful in the 1970s, after one of its former leaders, Charles Stenvig, was elected mayor. Kroll became president of the union in 2015. Today, protesters and other activists in the city say the union, not the police chief, holds the most sway over officers and their behavior on patrol. “The only authority they respect is Police Federation President Bob Kroll,” Tana Hargest, a Minneapolis-based artist and activist, tweeted a day after Floyd’s death. “[T]here’s nothing our elected representatives can or will do to bring them to heel.”

Through a series of controversies over the years, Kroll has been a staunch defender of the police. In 2015, after two white officers shot 24-year-old Jamar Clark in the head, Kroll spoke on television about Clark’s “violent” criminal history; later, when the officers were cleared of wrongdoing, he referred to Black Lives Matter as a “terrorist organization,” according to the Minneapolis Star Tribune.

In 2007, Kroll also referred to former US Rep. Keith Ellison, who is Muslim and Black and has pushed for criminal justice reforms, as a terrorist, according to a lawsuit filed by now–Police Chief Medaria Arradondo alleging racism within the police department. The lawsuit accused Kroll of wearing a motorcycle jacket with a white-power patch sewed into the fabric, and said he had “a history of discriminatory attitudes and conduct.” He has told reporters he was part of the City Heat motorcycle club, some of whose members have been described by the Anti-Defamation League as displaying white supremacist symbols. Kroll did not respond to a request for comment but has denied the allegations in the past.

A year after Clark’s death, in 2016, Kroll again showed his disdain for protests about racial inequality. That December, four off-duty officers walked off their job working security at the Lynx basketball game after the players denounced racial profiling at a press conference and wore Black Lives Matter warmup jerseys before the game. “I commend them for it,” Kroll said of the officers.

Kroll joined the Minneapolis police department back in 1989. According to a Star Tribune investigation, he has been the subject of at least 20 internal-affairs complaints during his three decades there, though all but three were closed without discipline. As a young officer in 1994, he was suspended for five days for excessive force, according to a report by City Pages, but that decision was later reversed by the police chief. The next year, he fought a lawsuit that accused him of “beating, choking and kicking” a biracial 15-year-old boy while saying racial slurs, the St. Paul Pioneer Press reported, but a federal jury cleared him of wrongdoing. In 2003, the department demoted him for three months for “code of ethics” violations.

One of the most egregious allegations took place in 2004, while Kroll was off-duty. Kroll and another officer were accused of beating a man whose backpack bumped against their car while walking out of a bar on a Friday night; when the man’s friends came to help, the officers allegedly punched and kicked them. The Civilian Review Authority, a board that investigates complaints against Minneapolis police officers, sustained the complaint against Kroll. He was suspended for 20 days. “How can he even still be on the force with behavior like this?” the assaulted man’s father told City Pages. Kroll denied wrongdoing and said the man’s friends attacked them.

“The persona of me is that I’m some big boogeyman,” he said. “I’ve been told I’m racist, and I’m violent. I’m aware of that. I’ve had more complaints than most, but I’ve had much higher contacts, and a much higher number of arrests.” He claimed he had been cleared of wrongdoing on almost every occasion.

As head of the union, Kroll has pushed for aggressive policing. Last year, Mayor Jacob Frey banned a “warrior-style” training for officers that has been linked with other officer-involved killings, including of Philando Castile in 2016 in Minnesota. As Mother Jones revealed in an investigation, the training promoted a “killology” view of law enforcement that urged officers to be prepared to use more force, not less. Kroll described the mayor’s ban as illegal and vowed to continue making the training free through the union for any officers who were interested. “It’s not about killing, it’s about surviving,” Kroll said of the training at the time.

For Kroll, Trump has been a natural ally. “The Obama administration and the handcuffing and oppression of police was despicable,” Kroll told CBS Minnesota after speaking at the president’s rally last year. “The first thing President Trump did when he took office was turn that around…he decided to let cops do their job, put the handcuffs on the criminals instead of us.” Before the rally, Kroll’s union sold “Cops for Trump” T-shirts, which brought in close to $100,000, as a way to protest the mayor’s prohibition on officers wearing their uniform to political events. Kroll wore one of the red shirts to the podium as Trump introduced him as “the great gentleman on television.”

“If he was sincere about wanting to bring trust and support about a public safety,” Mayor Frey told reporters, “he should spend more time getting to know residents and less time getting publicity from Donald Trump.”

Mayor Frey has, in turn, been critical of the union leader. “If he was sincere about wanting to bring trust and support about a public safety,” Frey told the Star Tribune, “he should spend more time getting to know residents and less time getting publicity from Donald Trump.”

After Floyd’s death, activists are pointing fingers at Kroll. “We believe that this department wide sickness emanates directly from leadership—specifically the President of the Minneapolis Police Federation,” members of Metropolitan Urban Indian Directors, a network of American Indian organizations in the Twin Cities, wrote in a statement. “Mr. Bob Kroll has a long history of bigoted and ignorant remarks in the press, and public displays of allegiances with known purveyors of racism.”

Kroll has pushed back against these types of complaints. “It bothers me that they won’t look beyond the accusation and back up what the truths are,” he told the Star Tribune after the Trump rally. “I mean they say, ‘Oh he’s a racist,’ and I will tell you that’s complete [expletive]—anybody that knows me will tell you that’s complete [expletive]. So put your money where your mouth is: What have I ever done to be a racist?”