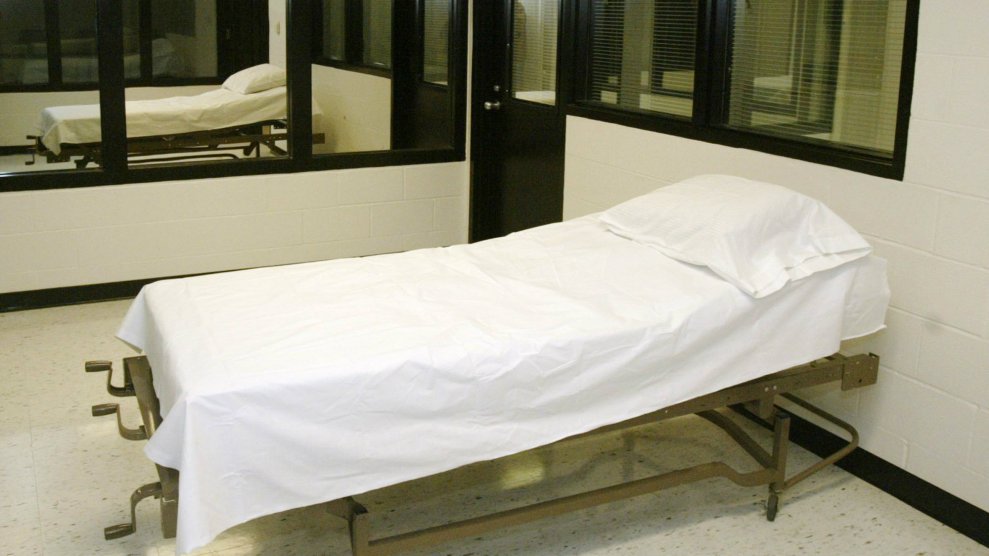 On Monday, Missouri’s Republican Gov. Mike Parson opened all businesses including hair salons, restaurants, and gyms. According to Harvard researchers, Missouri would need to conduct about 1,855 tests per day before safely opening up. But even though the state is currently failing to meet that goal by 549 tests a day, Parson also is allowing sports events, concerts, and church services to resume. Some retailers will need to reduce their occupancy capacity, but not hotels or restaurants. The state government is asking all Missourians to practice social distancing, frequent hand-washing, and mask wearing to continue to slow the spread of the coronavirus.

Unlike other states that have reopened, Parson appears to be taking the effort to return to normal life to a new level: He’s allowing the state to execute an inmate in the middle of the pandemic. Even Texas, which has also reopened stores, beaches, and restaurants, and is the leader in US executions, has rescheduled six executions so far. The attorneys for one inmate argued that they along with prison personnel could be at risk of getting the virus if the execution proceeded.

No such concerns seem to be standing in the way of the execution on May 19 of 64-year-old Walter Barton for the 1991 killing of Gladys Kuehler. Even without the coronavirus, advocates have argued that Barton did not commit the crime and should not be put to death. In February, Barton’s lawyer Frederick Duchardt Jr. said, “Missouri is about ready to put to death an actually innocent man.” The state relied on a jailhouse informant and blood splatter evidence to convict Barton, both of which are considered to be unreliable. Barton, who has maintained his innocence for nearly 30 years, was tried five times for the murder between 1993 and 2006; the first two ended in mistrials, and his conviction has been overturned twice. His fifth trial ended in conviction.

Under normal circumstances, his execution would involve a number of factors that need to be coordinated: court hearings, witnesses for the execution, prison staff participating in the process, not to mention engaging the family of the inmate who is facing death, and, possibly, the family of the victim. But given the public health emergency, advocates point out that continuing with the execution on May 19, not only can compromise due process but could also put many others at risk. “It is dangerous and irresponsible to gather the number of people required to carry out an execution in one place during the COVID-19 crisis,” Sister Helen Prejean, an anti–death penalty activist, tweeted in March.

COVID-19 has altered—and sometimes halted—all aspects of regular life, and the court system is no exception. Many courts across the country have postponed some hearings and trials and provided limited services such as emergency hearings for domestic violence or restraining orders remotely. Before the execution of an inmate takes place, lawyers will often interview witnesses who can provide testimony; look at evidence; or even file last-minute appeals. “When courts aren’t even capable of dealing with the ordinary business, it is unrealistic to expect they’ll be capable of dealing with extraordinary business,” Robert Dunham, executive director of the Death Penalty Information Center, told UPI, an international news agency.

Then there’s the issue of the number of people it requires to carry out an execution, including lawyers, witnesses, media members, and the victim’s family members. It’s hard to imagine an appropriately distanced execution in an American prison. In Missouri, the inmate is allowed up to two members of clergy and five friends or relatives to witness his death. Then there are the inmate’s lawyers, the state’s witnesses, members of the media, and the loved ones of the victims. Would it be possible for all of those people to stay safe from COVID-19 inside of a prison? The Missouri Department of Corrections did not respond when asked if it would make any accommodations for this execution.

After the first reported case of COVID-19 in the United States in January, criminal justice advocates and officials warned that prisons and jails can easily become incubators for rapid transmission of the disease. Studies have shown that indoor transmission is especially likely. Tight living quarters, a population that’s more likely to have underlying health conditions, and limited access to soap and water have led to COVID-19 outbreaks in correctional facilities across the country. In Texas, where about 1 percent of state prisoners have been tested, 70 percent of those tests came back positive, which suggests the outbreak is even more widespread. But there have already been infections among inmates awaiting death in other parts of the country. In Arizona, seven death row inmates tested positive for the coronavirus while several others reported COVID-19 symptoms. One has died.

“People tend to think of them as separated from the rest of society, but that is not the case,” Dr. Chris Beyrer, an epidemiologist at Johns Hopkins University, told the Texas Tribune. “Most [prison outbreaks] have begun with introductions from staff.”

Missouri prisons reflect this general trend, but testing has been highly limited. The Prison Policy Institute estimates there are 32,000 people in Missouri’s state prisons, and according to the Missouri Department of Corrections, as of Tuesday 190 inmates have been tested. Of this total, 31 tested positive and one inmate died while hospitalized. Barton is not housed in the Southeast Correctional Facility where Missouri’s known outbreak is occurring; instead he’s at the state prison in Potosi*, about an hour away from St. Louis.

Missouri plans on using a single dose of pentobarbital, which is a barbiturate, to execute Barton. Last month, a group of physicians, pharmacists, and other medical experts wrote a letter to the states still practicing the death penalty, urging them to release stockpiled drugs to hospitals that are treating COVID-19 patients. (Pentobarbital was not on the list.) In 2009, after several European drug manufacturers ceased production of some drugs commonly used in lethal injections, like certain sedatives and paralytics, death penalty states turned to other drugs including Midazolam, a sedative responsible for several botched executions, and fentanyl, a powerful drug responsible for scores of overdose deaths. “There’s not a single [drug] that’s used by correctional facilities that doesn’t have a use in healthcare,” Dr. Joel Zivot, an anesthesiologist at Emory University and one of the authors of the letter, told me. “None of them have ever been invented for executions.”

States also began shrouding their execution protocols behind secrecy laws, leaving the public with little information about their supply of drugs and where they came from. But now those same drugs can be used to help save the lives of COVID-19 patients, particularly patients on ventilators.

“Our research suggests that the drugs currently stockpiled by your states could be used to treat hundreds of COVID‐19  patients,” the group wrote in the letter. “For years, pharmaceutical companies and health experts have warned that states’ pursuit of execution drugs create public health risks and ‘could result in the denial of medicines from patients who need them most.'”

Meanwhile, capital punishment lawyers across the country have successfully received stays for their clients because there doesn’t seem to be a way to carry out an execution without denying the inmate their rights. In Tennessee, Kelley Henry argued that because of the pandemic disrupting travel and in-person work, her team wouldn’t be able to make the case for clemency for their client. And in Texas, Michael Mowla explained in an appeal for his client that a specific team of prison staffers is trained to carry out lethal injections, and their absence, whether from illness or an attempt to reduce the number of people involved, could lead to a botched execution.

“If the state moves forward with killing Walter, we would be prioritizing capital punishment over the health and safety of those inside [Missouri] prisons,” Missourians for Alternatives to the Death Penalty said in a statement. “This would put all involved in the execution at risk for contracting COVID-19.”

Correction: An earlier version of this article incorrectly stated the prison that Walter Barton is housed in.