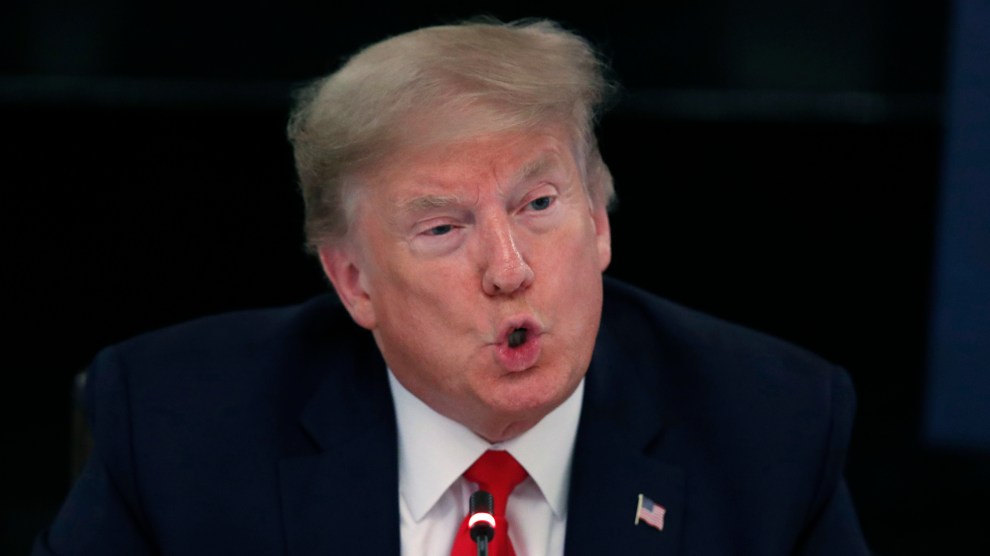 Donald Trump speaks with industry executives about reopening the country after the coronavirus closures on May 29.Alex Brandon/AP

President Donald Trump on Saturday threatened that law enforcement were ready to respond with “dogs” and “weapons” against people protesting outside the White House on Friday night. Hundreds of demonstrators had gathered to protest the death of George Floyd at the hands of a white police officer in Minneapolis. Floyd died after a Minneapolis officer pinned him to the ground by pressing a knee against his neck, and holding him there for nearly nine minutes, even after he went motionless.

Protesters took to the streets in dozens of cities demanding an end to police violence against Black people. In Washington, hundreds of demonstrators faced off with Secret Service and police officers in riot gear.

On Saturday morning, Trump thanked the Secret Service for standing guard outside the White House and responding to protesters, some of whom had hurled rocks and bottles at the agents. “They let the ‘protesters’ scream & rant as much as they wanted, but whenever someone got too frisky or out of line, they would quickly come down on them, hard—didn’t know what hit them,” Trump tweeted.

He said officers had been ready to respond with violence against any protesters who went onto the property. “Big crowd, professionally organized, but nobody came close to breaching the fence. If they had they would have been greeted with the most vicious dogs, and most ominous weapons, I have ever seen,” Trump wrote. “That’s when people would have been really badly hurt, at least.”

….got too frisky or out of line, they would quickly come down on them, hard – didn’t know what hit them. The front line was replaced with fresh agents, like magic. Big crowd, professionally organized, but nobody came close to breaching the fence. If they had they would….

….have been greeted with the most vicious dogs, and most ominous weapons, I have ever seen. That’s when people would have been really badly hurt, at least. Many Secret Service agents just waiting for action. “We put the young ones on the front line, sir, they love it, and….

The statement came one day after the president referred to protesters in Minneapolis who looted stores as “thugs,” and appeared to threaten to shoot them if they continued. “Just spoke to Governor Tim Walz and told him that the Military is with him all the way. Any difficulty and we will assume control but, when the looting starts, the shooting starts.” Trump later said he meant that looting would likely lead to violence by protesters, pointing to the shooting deaths of people in Minneapolis and Louisville as demonstrations continued. But the phrase he wrote—”when the looting starts, the shooting starts”—originated in the 1960s from Miami police chief Walter Headley, during a speech in which he threatened to deploy guns and dogs as part of a “war” on people who committed crimes.

At Trump’s orders, as protests continued a fourth night in Minneapolis, the Defense Department instructed active-duty military police units from several bases around the country to prepare to deploy to Minneapolis. On Saturday, Gov. Walz also called for a full mobilization of the National Guard, which he said was the largest deployment of the force in the state’s history.

National Guard units are routinely deployed in response to civil unrest such as protests, but sending military police units to the city would be more unusual. Military police were deployed in 1992 during the Los Angeles riots that erupted after the officers who beat Rodney King were acquitted.

The officer who arrested Floyd, Derek Chauvin, was arrested Friday and charged with third-degree murder and manslaughter.