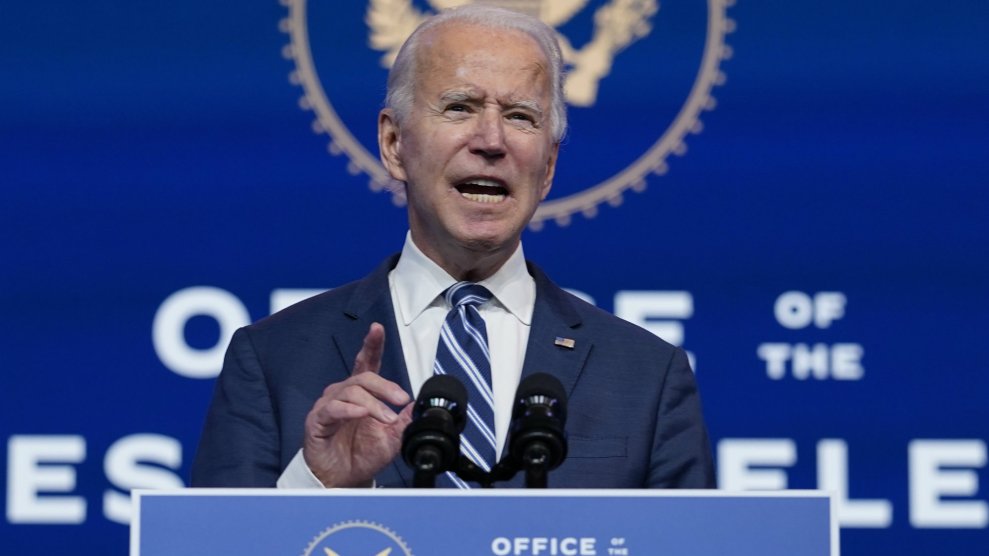 Donald Trump may have lost the election—despite the lies he continues to spew on Twitter and the relentless assault on democracy by his usual enablers—but his administration is acting as if it’s business as usual: Regulations are being wrecked, officials fired, and the pandemic ignored in the midst of skyrocketing cases.

What might be easy to ignore in the midst of all the chaos is that a federal execution spree will take place during the lame-duck period of his presidency. Last year, the Department of Justice announced that it would resume federal executions after a 16-year hiatus. After the Supreme Court ruled in its favor, the Trump administration began carrying out executions of inmates on federal death row. So far, it has put seven people to death. Before the end of the year, three more people will be executed, and then President-elect Joe Biden will have some decisions to make about what comes next.

With tragic albeit unintended symmetry, when Trump closes out his presidency with three federal executions during the lame duck sessions, it will be because his successor helped make them possible with the 1994 crime bill. Orlando Hall, a 49-year-old Black man who was one of the first people sentenced to death under the legislation Biden championed as a senator nearly 30 years ago, is scheduled to die on November 19. Lisa Montgomery, the only woman on federal death row, follows on December 8. Montgomery’s lawyers have filed a lawsuit to halt the execution because they contracted coronavirus while traveling to or visiting their client in federal prison in Texas and cannot sufficiently represent her while ill. This, however, comes as no surprise, as federal prisons have been a hot spot for infections. In September, the ACLU alleged that the rush to carry out executions may have sparked an outbreak in the federal prison in Indiana where death row inmates are held. The last person scheduled to die is Brandon Bernard on December 10.

Back in 1992, Democrats and Republicans competed for who was tougher on crime. Biden, then senator from Delaware, responded to critics of the proposed crime bill who claimed it was too weak. He bragged that his proposed crime legislation vastly expanded crimes that could be eligible for the federal death penalty. “It provides 53 death-penalty offenses. Weak as can be, you know?” he said. “We do everything but hang people for jaywalking in this bill.” The final result was the Crime Bill, which created mandatory minimum sentences and expanded eligible death penalty crimes, among other things.

“It provides 53 death-penalty offenses. Weak as can be, you know? We do everything but hang people for jaywalking in this bill.”

In 1994, Hall was 23 years old when he and four other men kidnapped, raped, and killed 16-year-old Lisa Rene in Texas, after Rene’s older brothers stole money from Hall and his co-defendants in a drug deal gone wrong. Hall was eligible for death because the Crime Bill had added kidnapping resulting in death to the list of eligible crimes. Then, at his 1995 trial, he was tried by an all-white jury. “The prosecution team enlisted the help of a former state prosecutor known for keeping Black citizens from serving on criminal juries,” Hall’s lawyers Marcia Widder and Robert Owen said in a statement. “In the years since Mr. Hall’s trial, the US Supreme Court has expressly found that this very prosecutor, in a trial that preceded Mr. Hall’s, discriminated against Black potential jurors on account of their race and then lied under oath in an attempt to conceal his racist conduct.” The racial discrimination reflects federal death row itself as well as the legacy of the crime bill. Sixty percent of federal death row inmates are nonwhite and a staggering 45 percent are Black.

In 1972, the Supreme Court struck down the death penalty in Furman v. Georgia, holding that it was a cruel and unusual punishment and thus violated the Eighth Amendment. Four years later, capital punishment was reinstated by the high court in Gregg v. Georgia and executions resumed in the states. The federal death penalty was not restored until 1988.

Between 1988 and 1994, only six people had been sentenced to federal death row because so few crimes were eligible. But thanks to the crime bill, those numbers swelled to 79 by 2019. Despite this, the federal death penalty remained fairly dormant. Before Trump’s revival, the last person to be executed by the US government was Louis Jones Jr. in 2003. In 2014, Barack Obama ordered a federal review of the death penalty, leading advocates to wonder if abolishment was near, but the review never went further. Then Trump won the White House.

Biden has since distanced himself from the crime bill, calling it a “mistake” in an October town hall. He’s no longer bragging about capital punishment and instead has pledged to bring Trump’s execution spree to an end. “If the president doesn’t want to carry out executions, they will not be carried out during that administration,” Robert Dunham, the executive director of the Death Penalty Information Center told the Washington Post. Biden has also indicated that he will not only halt federal executions, he will seek to end it by legislation and incentivize states to end the punishment as well. Speaking about death row inmates who had since been exonerated, Biden called for the end of the punishment. “Because we can’t ensure that we get these cases right every time, we must eliminate the death penalty,” he tweeted last year.

“Because we can’t ensure that we get these cases right every time, we must eliminate the death penalty.”

But this stated commitment will do little for the three inmates who are facing executions in the next two months. Senators Cory Booker (D-N.J.), Patrick Leahy (D-V.T.), Richard Durbin (D-Ill.), and Rep. Ayanna Pressley (D-Mass.) have called on the Trump administration to call off the scheduled executions, citing Trump’s loss. “A record number of Americans voted in favor of President-elect Biden and Vice President–elect Harris and they deserve an opportunity to implement their policy agenda without the Trump Administration rushing to take preemptive and irreversible steps,” they wrote in a letter. “While you will remain in office for a few more weeks, going forward with executions in the weeks before the new administration takes office would be a grave injustice.”

But if the administration pushed forward with executions during a pandemic, it seems unlikely that an electoral loss would cause Trump officials to reverse course. There is a lot of talk about Trump’s legacy, but it seems that carrying out executions while all but ignoring a surging pandemic after being defeated at the polls is the perfect embodiment of his cruelty, carelessness, and indifference. What better way to sum up four years of Trump’s policies?

When Biden entered the presidential race for the third time in his life in 2019, he still had not officially come out against the death penalty. His evolution on the issue illustrates the hurdles many older politicians face. America’s love affair with white septuagenarians in power means that elected officials like Biden have witnessed how the policies they championed early in their careers become less palatable over time. As Biden makes racial justice a cornerstone of his presidency, he’ll have to grapple with what role he played in the injustices plaguing the country. But for Orlando Hall, Biden’s mea culpa on the death penalty has come too late.