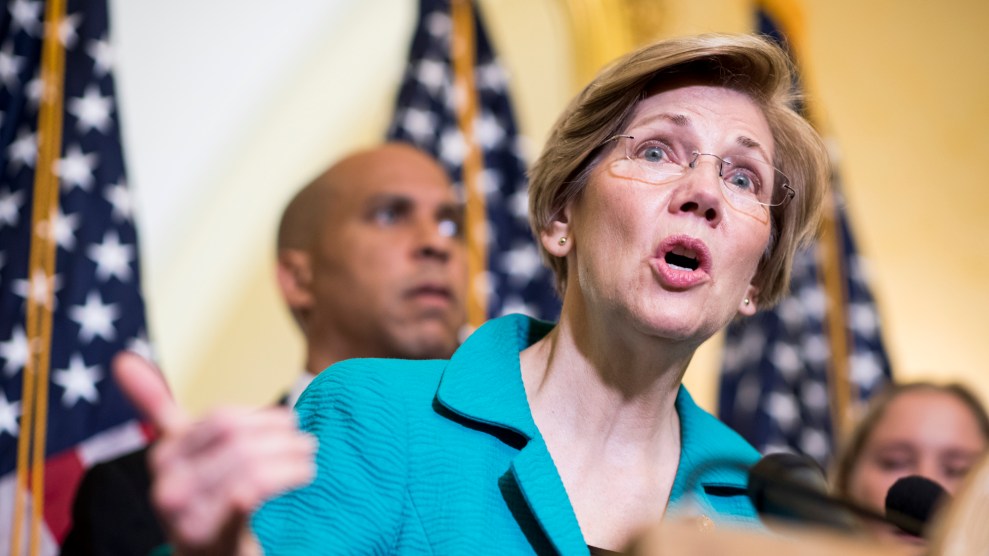 The organization responsible for accrediting US prisons, jails, and detention centers runs a “corrupt” process that puts a “rubber stamp” on dangerous facilities while taking in millions from the private prison industry, according to a scathing report from Sen. Elizabeth Warren (D-Mass.), shared exclusively with Mother Jones.

The report, the result of a nearly 19-month investigation by the senator’s office, examined the American Correctional Association (ACA), a nongovernmental organization that acts simultaneously as a professional association and an oversight body for prison and detention systems. Federal, state, and local governments pay the ACA to audit the facilities where they keep people incarcerated and issue its stamp of approval on their operations. Qualifying facilities must meet the standards ACA spells out in its published manuals, covering everything from fire code compliance to officer gun training. Private prisons and detention centers, meanwhile, are often required to get accredited by the ACA to access lucrative government contracts, according to Warren’s report—and when scrutinized, they point to their accreditation status as a defense. After all, the ACA’s website says, accreditation is awarded to the “best of the best.”

The problem, Warren’s report found, is that the “best of the best” includes virtually every facility that pays its accreditation fees. The ACA currently counts over 1,200 accredited facilities; since 2007, only four have been denied accreditation. The groups provides three months’ notice and preparation tools for audits, “essentially providing the answers to the test in advance,” as the report puts it. And the ACA’s seal of approval lasts three years, with facilities conducting “self-reporting” in the interim.

“A review of available evidence suggests that that accreditation has little to no correlation with detention facility conditions and practices, and therefore little to no value whatsoever,” the report states. “The result has been the rubber-stamping of dangerous facilities and the waste of millions of taxpayer dollars.” Warren recommends that the Department of Justice and Department of Homeland Security stop paying the ACA for accreditation and instead establish a “rigorous, independent, and transparent” oversight process.

In a letter responding to initial questions from Warren’s office, ACA executive director James Gondles wrote that there was “nothing nefarious” in helping facilities prepare for audits—though the group is “currently in the process of considering” unannounced audits. The group did not respond to a request for comment on the findings of her investigation.

Warren’s report points to examples of private prisons and detention centers that maintained their ACA accreditation despite “critical failures” like riots, staffing problems, poor living conditions. It also cites the Adelanto Detention Center, operated by the for-profit GEO Group. Adelanto was accredited by the ACA in 2014 and again in 2017 with a score of 99.6 percent. But when a government watchdog agency conducted a surprise inspection in May 2018, inspectors found that detained immigrants were inappropriately forced into shackles and punished with solitary confinement before they were found to have broken any rules. Some detainees had to wait weeks or months for medical care, even when they were acutely ill, and there was a months-long waitlist for dental work. (The dentist, who invariably chose to pull teeth over filling cavities, “suggested detainees could use string from their socks to floss if they were dedicated to dental hygiene,” according to the inspectors’ report.) And despite a history of suicide attempts in the facility, immigrants were allowed to freely hang knotted bedsheets referred to “nooses” in their cells.

“The ACA’s private prison accreditation system is riddled with conflicts of interest, lacks transparency, and is subject to zero accountability even though millions in taxpayer dollars…flow to the ACA and private prison companies,” Warren’s report states. “These problems put the health and wellbeing of incarcerated and detained individuals, the staff and employees who work in those facilities, and our communities at risk.” (In his letter, Gondles wrote that criticizing the ACA for problems at accredited facilities “misunderstands” the purpose of its accreditation program: “ACA accreditation does not mean that there will never be an incident of violence, or that there will never be noncompliance with a health-related, safety, or other ACA standard,” he said.)

The report’s description of a lax ACA auditing process lines up with what my colleague Shane Bauer observed in 2015 while working undercover as a guard in a prison run by CoreCivic, then known as the Corrections Corporation of America:

Two well-dressed white men enter Ash unit and do a slow lap around the floor. The only questions they ask Bacle and me are what our names are and how we’re doing. They do not examine our logbook, nor do they check our entries against the camera footage. If they did, they would find that some of the cameras don’t work. They do not check the doors. If they did, they would see they need to be yanked open by hand because most of the switches don’t work. They don’t check the fire alarm, which automatically closes smoke doors over the tiers, some of which must be jimmied back open by two guards. They do not ask to go on a tier. They do not interview any inmates. They do a single loop and they leave.

These issues have been made worse by the COVID-19 pandemic, which turned prisons, jails, and detention centers into some of the country’s largest coronavirus hot spots, infecting nearly a quarter million prisoners. In response to the pandemic, the ACA has reduced its auditing and refused to adopt new health and safety standards, the Warren investigation found—missing an opportunity to protect the health of incarcerated people, who are significantly more likely than the general population both to be infected by COVID-19 and to die from it.

But why is the system so broken? Warren’s report suggests that it all comes down to money. In addition to being “the closest thing we have to a national regulatory body for prisons,” as Bauer put it, it’s also a professional association that lobbies Congress on criminal justice issues and serves as a “voice for corrections.” That dual role presents an “irreconcilable conflict of interest” when the time comes to evaluate conditions inside prisons and detention centers, Warren’s report argues.

For one thing, the ACA gets nearly half its revenue from accreditation fees paid by the very entities it audits, including top private prison companies, her investigation found. Over a five-year period from 2014 to 2018, the GEO Group spent $1,429,599 on ACA accreditations, while CoreCivic spent $867,580, according to the report. The Management and Training Corporation, a smaller competitor, paid $501,850. The companies pay the ACA tens of thousands more in conference costs, certification fees, training, and for other services. Meanwhile, current or former private prison employees sit on each of the ACA’s governing boards and committees. (“The fact that one representative of a private correctional company sits on ACA’s Executive committee and two such representatives sit on the ACA’s Board of Governors and Delegate Assembly could not even begin to suggest that ACA is somehow beholden to those private interests or that the decisions of ACA’s governing bodies are driven by persons with conflicts of interest,” Gondles wrote in his letter to Warren, adding that the organization was governed by volunteers.)

“Incarcerating and detaining millions of people for profit perverts our criminal and immigration systems and disproportionately harms Black and Brown people,” Warren said in a statement to Mother Jones. “This investigation shows that the American Correctional Association, the nation’s largest accreditor of federal prisons and detention facilities, is rife with corruption and that the federal government should end its reliance on ACA’s deeply-flawed accreditation process and ban private prisons.”

Warren is no friend to private prisons; during her presidential campaign, she issued a plan to end their use on both the federal and state levels. She and other Congressional Democrats have been investigating private prison and detention center oversight since at least 2018, following a series of alarming reports on ICE detention centers from the Department of Homeland Security’s Office of the Inspector General, a watchdog agency, including the report on Adelanto. Inspections at other private detention centers found delays in medical care, problems with mold and food handling, or a lack of basic hygiene supplies like toothpaste and toilet paper. ICE was ostensibly keeping tabs on these facilities using an oversight system involving yet another private auditor, the Nakamoto Group, but that system led to neither “sustained compliance” nor “systemic improvements,” according to yet another OIG report.

When Warren and other Senate Democrats sent letters to GEO and CoreCivic expressing “deep concern” over the findings, both companies defended themselves in part by saying they were regularly audited. GEO’s response touted the ACA accreditation scores of its Adelanto facility—kicking off the senator’s investigation.