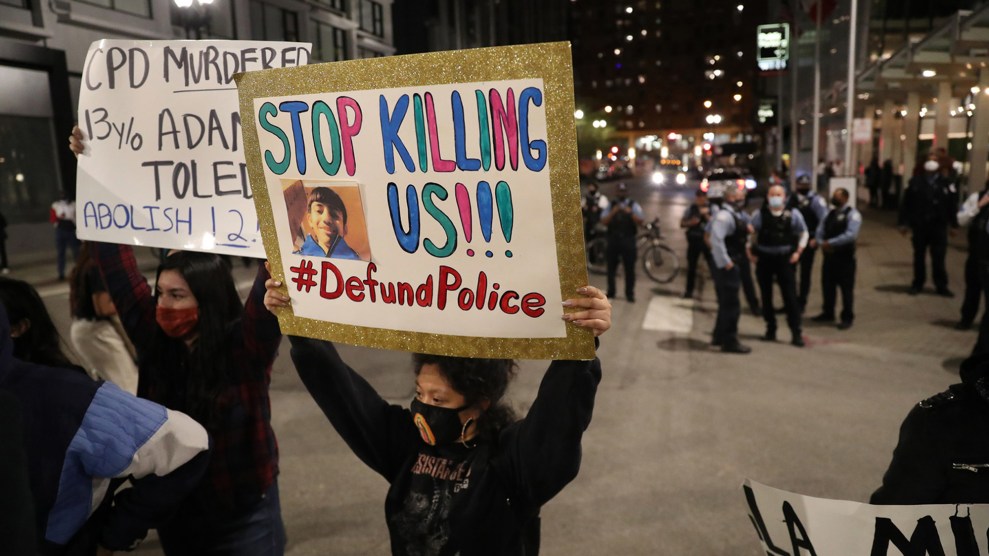 Chicago police on Thursday released body-cam video from the police officer who fatally shot 13-year-old Adam Toledo late last month. The video contains a crucial detail that was lacking in the Chicago Police Department’s initial statement: The boy appeared to have both hands raised the moment he was shot.

“Watching the body cam footage, which shows young Adam after he was shot, is extremely difficult,” Chicago mayor Lori Lightfoot said during a press conference Thursday before warning parents that children should not watch the video.

Police shot Toledo on March 29 after responding to a report of shots fired. In a court hearing for the 21-year-old man who was with Toledo on the night of his death, a prosecutor claimed that Toledo had a gun in his right hand the moment he was shot. The state’s attorney’s office later said that the prosecutor “failed to fully inform himself” of the details of the case. An attorney for the boy’s family said that he was not holding a weapon at the time he was shot—a conclusion the body cam video seems to uphold.

As my colleague Sam Michaels reported earlier this month, the Chicago Police have until now intentionally kept the details of the case murky. Especially after the release of the new video, the police’s actions following the boy’s death look increasingly like a cover-up:

In a carefully constructed statement issued hours after the shooting, the police department only revealed that officers had seen “two males in a nearby alley,” and that one of them was armed and began to flee. (The other person in the alley was a 21-year-old man.) A “foot pursuit…resulted in a confrontation,” and an officer “fired his weapon, striking the offender in the chest.” Along with these bare details, the police department tweeted a photo of a gun they said was recovered at the scene.

On Thursday, Chicago Police Superintendent David Brown clarified that the so-called male “offender” who was shot by police was a juvenile. But even then, according to Carlos Ballesteros, a reporter at Chicago-based Injustice Watch, he did not yet specify the boy was just 13 years old; it took reporters digging through an autopsy ledger to break the news about his age that day, according to Lakeidra Chavis, a Chicago-based reporter at the Trace, which covers gun violence. “Someone knew early on the person shot was actually a young teenager. That information was omitted while crafting a self-defense narrative,” she tweeted.

The release of the video is likely to spark further protests against police violence, especially following the high-profile killing of Daunte Wright and ongoing trial of Derek Chauvin, who is accused murder in the death of George Floyd. The video, which is graphic, has been released on the Civilian Office of Police Accountability website.

Chicago police department has killed more people under the age of 18 than any other local law enforcement agency in America.