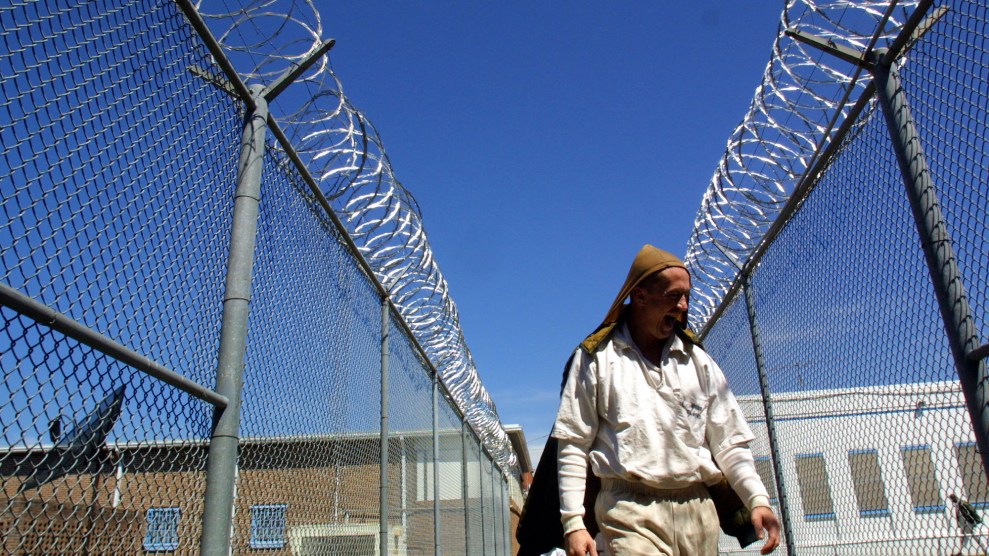 In the summer, Texas prisons become hell itself. Most prisons lack air conditioning in housing areas, and temperatures inside can rise above 100 degrees. People confined to their cells have few or no options for keeping themselves cool. Some break prison windows, trying to increase airflow. Lovinah Igbani used to cover herself with a wet sheet, according to the Texas Observer; it would dry in 30 minutes. Without options, she would lay on her bunk with her cellmate’s sweat dripping onto her. At least 13 people have died of heat stroke over the last decade.

Yet as Texas enters another summer, state lawmakers have once again killed a bill to require air conditioning in prisons, the Dallas Morning News reported.

Every couple of years, Texas legislators consider a bill to require air conditioning in state correctional facilities. And every couple of years, it goes nowhere. This year’s version of the air-conditioning bill looked like it might change that pattern. This spring, after Igbani told the Texas House Corrections Committee about her experience inside, the bill passed the Texas House with bipartisan support, with just 18 members voting against it. “The reality is in Texas, we are cooking people in prison,” Terry Canales, a Democratic legislator who has repeatedly introduced prison air conditioning bills, told the House during a debate.

But in the Senate, the bill didn’t even get a hearing, according to the Dallas Morning News. The Texas legislative session ends tomorrow. So the law, again, will remain the same: County jails are required to maintain temperatures between 65 and 85 degrees. But for the 117,000 people serving state sentences in prison, there are no similar regulations. Those who are lucky will get one of the prison system’s 34,000 air conditioned beds. The others, like Igbani, will have to make do.

Part of the reason the bill faces such an uphill battle: The Texas Department of Criminal Justice claims that it will cost $1.1 billion to install A/C and $140 million annually to maintain it. (The department has inflated those estimates before, according to the Texas Observer.) This year’s bill capped spending at $300 million over the next seven years, phasing in air conditioning gradually. Meanwhile, the state has paid to fight 17 lawsuits involving the stifling heat inside its facilities.

This year, Texas prisons also faced the opposite problem. A historic cold snap sent temperatures plummeting, leading prisoners to set fires inside a tier to keep warm, according to prisoners’ families:

Nichole J., whose husband lives in the Clemens rows, also says that people on the rows were trying to light fires to stay warm, using toilet paper, scrap paper, and in one case, their socks as kindling. According to Nichole, her husband asked to see the doctor because he was coughing and struggling to breathe in the cold, but the request was denied. “My husband said it was hard to catch his breath,” she said. To stay warm, she explains, he heats water in his hot pot, fills a water bottle, and tucks it into his socks. “Many of the inmates, my husband included, fear going to sleep because they they’re afraid that they’re going to die in their sleep,” Nichole says. On Thursday, she says he told her corrections officers had done a “blanket check” that morning—taking away extra blankets from anyone who had more than one…

Every day, Nichole says, when her husband talks to their children, her oldest son comes back with questions. “He’s like, ‘Mom, why are they treating him like that? Mom, why don’t they give him blankets? Mom, Dad is cold.’ Earlier, he was like, ‘Mom, Dad said he can’t feel his toes.’” Each time, she has to tell him there is nothing she can do. “I’m trying,” she tells me. “And it’s sad when your children come up to you and they express concern. They’re children. They shouldn’t have to go through that. They shouldn’t have to wonder if their dad is coming home.”

Yet the state corrections department responded to reports of the fires, clogged toilets, and blankets being taken away from prisoners with dismissal: “You know, what I think is the biggest headline coming out of this is the fact that we really have seen no significant issues coming out of this very significant event,” Jeremy Desel, communications director for TDCJ, told me, adding that the department’s command structure and communications had “no reported incidents of any level of significance.”