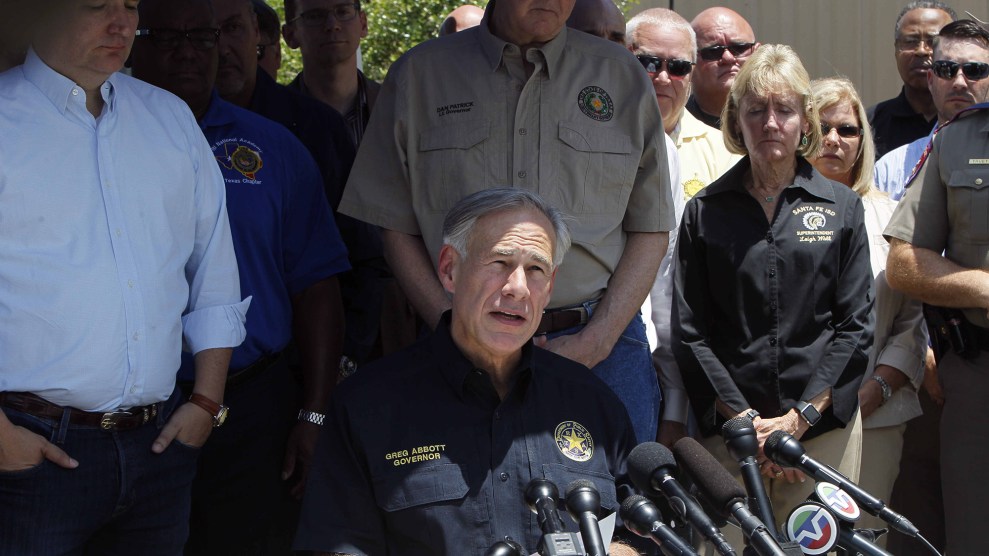 Greg Abbott, Ted Cruz, and Dan Patrick at a press conference following a 2018 shooting at a school in Santa Fe, Texas. Steven Song/Xinhua via ZUMA Wire

On Wednesday afternoon, as Texas Gov. Greg Abbott briefed reporters about the school shooting in the town of Uvalde that left 19 children and two adults dead, he was approached by an unexpected speaker—his Democratic opponent in this fall’s election, Beto O’Rourke. The former El Paso congressman and presidential candidate, who had been waiting silently in an aisle seat in the school auditorium, walked up to the stage and began to challenge the governor.

“You’re doing nothing,” O’Rourke said. “You’re offering us nothing. You said this was not predictable. This was totally predictable.”

.@BetoORourke just showed up and shook things up. @statesman pic.twitter.com/Z1FtBwUEdJ

He was shouted down by some of the people on stage. One called O’Rourke a “sick son of a bitch.”

“This is not the time or the place to do that,” said another.

Eventually, O’Rourke was escorted away from the stage by police.

Crashing your opponent’s press conference is, as Cruz said, a stunt. Of course it is. But so was the event O’Rourke was crashing, in which the most powerful men in the state assembled at a school auditorium to do…what, do they do, exactly?

We’re all familiar with this routine by now—the elected officials who descend on the scene in their best emergency-response earth tones to bask in their proximity to law enforcement and collectively absolve everyone with power of any responsibility. People like Abbott and Cruz and Ken Paxton and Dan Patrick—the state’s Republican attorney general and lieutenant governor—will emphasize the “tragedy” of what happened and the unpredictability of it all. There were no obvious signs, Abbott said on Wednesday, not long before O’Rourke’s interruption; law enforcement acted quickly, he said, and saved lives; the assault rifles he acquired shortly before the shootings were, of course, purchased legally. They’ll give a few days of defensive interviews about hiring veterans to stand guard at schools. Maybe, in a few weeks, we’ll get “Uvalde Strong” t-shirts.

O’Rourke’s rhetoric on gun control viscerally shifted after the 2019 massacre targeting Mexican and Mexican-American shoppers at an El Paso Walmart. He pushed a mandatory assault-rifle buyback program during that campaign and said at a presidential debate, “Hell yes, we’re going to take your AR-15.” He now says he is “not interested in taking anything from anyone,” but he has criticized Abbott for signing a law that allows anyone to carry a handgun without even acquiring a permit.

Ultimately, the question of whether his intervention Wednesday was polite or not is less important than the fact that O’Rourke is right. The effect, if not the outright point, of events like the one he crashed is to ensure that the right time and the place to discuss gun control never comes—to indulge the delusion that the people who are truly doing nothing are actually doing something. The shooting was predictable, if not in the specific sense, then in the broader one: The state’s and the country’s gun laws enable outcomes such as this by design. If it wasn’t predictable, then why can we keep predicting it?