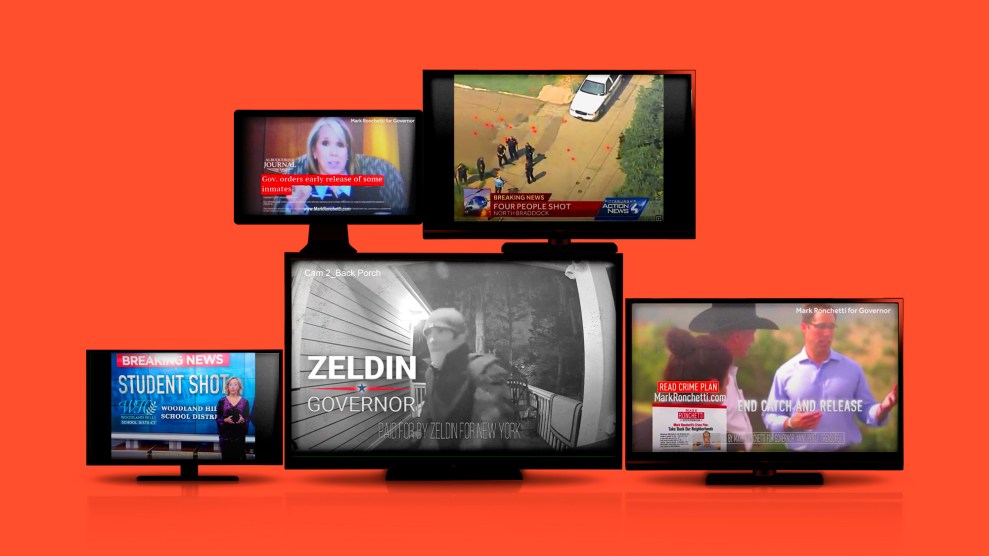 If you’ve watched even a sliver of the campaign ads ahead of the midterms, you’d be forgiven for believing that American cities have turned into cesspools of crime. In a recent ad for New York’s Republican gubernatorial candidate, Rep. Lee Zeldin, a montage of grainy video footage shuffles between images of pedestrians and even children being punched and shot at on the streets. “You’re looking at actual violent crimes caught on camera in [Democratic Gov.] Kathy Hochul’s New York, and it’s getting much worse on Kathy Hochul’s watch,” a narrator claims as a man in a hoodie sneaks up behind someone on a sidewalk and shoves them to the ground.

In New Mexico, an ad that aired last month for Mark Ronchetti, the Republican gubernatorial nominee, shows his wife recounting how she and her children hid with terror in a closet because she believed a burglar entered the home. And in Pennsylvania, Lt.-Gov. John Fetterman, a Democrat now running for a US Senate seat, punched back recently against Republican criticisms that he’s “dangerously liberal on crime” by airing his own ad in which he reveals that he tattooed the dates of homicides onto his forearm to keep the issue at the front of his mind.

Of course, all the law and order talk around the midterms is nothing new. Crime has been a focal point in political campaigns for decades (who could forget Willie Horton?). And it gained even more attention in 2020 when Donald Trump tried to skewer his opponents by claiming—without much evidence—that the Black Lives Matter movement and protests to defund police caused widespread violence in Democratic-run cities. Similar dynamics are at play this year, but with a twist: What makes the current election season different from the others is that, unfortunately, as politicians spend heavily to fearmonger about crime, it’s now harder than ever for voters to fact-check their claims—because the most recent crime data collected by the federal government is abysmally incomplete.

Republicans have been especially proactive about capitalizing on fears about lawlessness. In the home stretch of the November elections, these candidates are spending a fortune trying to convince voters that violence is out of control around the country under Democrats’ watch. In just two recent weeks, the GOP’s candidates and groups shelled out more than $21 million on ads about crime, more than they spent on any other policy issue, according to the New York Times. In fact, if you look at all the party’s online ads in battleground states in September, policing and public safety were the focal points for almost half of them, according to data from Priorities USA, a group that tries to elect Democrats.

And Democrats have jumped onto the bandwagon—spending about $17 million on ads about crime during the same two-week period, hoping to convince voters that they’ll invest heavily in the police too. In Florida, for example, Democratic Rep. Val Demings, a former police chief herself, has emphasized in her ads for a US Senate seat that ideas like defunding cops “are just crazy,” after her opponent, Republican Sen. Marco Rubio, accused her of “turning her back on law enforcement.”

But all this talk of soaring crime isn’t based on much evidence, since the government’s data is particularly bad this year. Every fall, the FBI publishes state, regional, and national estimates about the number of murders, robberies, rapes, and some other offenses, based on information from local police and sheriffs’ departments. But while collecting the most recent data from 2021, the FBI mandated that local departments use a newer and more detailed reporting system. The problem is, many departments haven’t switched over to that model yet. As a result, the feds only gathered information from law enforcement agencies representing just 65 percent of the US population, compared with around 95 percent in prior years—rendering the latest estimates pretty meaningless. “In most instances,” the FBI wrote in a summary published this week,” the data “do not meet the criteria for statistical significance.”

New York City and Los Angeles, the two biggest cities by population, were among those that didn’t submit their information to the feds, according to the Marshall Project, a criminal justice news outlet. Neither did most agencies in California, New York, Illinois, Pennsylvania, and Florida, some of the most populous states. “With so many agencies failing to report a full year of data for 2021,” wrote analysts at the nonpartisan Brennan Center for Justice, a legal and policy institute, “this year’s annual crime data release will have significant blind spots.”

There is some other data we can point to for homicide trends—from the Centers for Disease Control and Prevention, for example, or the think tank Council on Criminal Justice, or the consulting firm AH Datalytics, which tracks killings in major cities. The available sources suggest that after a meteoric 30 percent increase in 2020, killings continued to grow slightly around the country in 2021, by around 5 percent in big cities compared to the previous year, and that they appear to be decreasing slightly this year. But when it comes to state or national trends for other types of violent crime, like rapes and assaults and robberies, it’s harder to draw conclusions. The FBI report estimates that overall violent crime dropped about 1 percent last year, but adds that there’s a decent chance it dropped even more, stayed the same, or rose instead. “There’s not a lot you can say with certainty,” says Jeff Asher, a data analyst who co-founded AH Datalytics after working for the CIA and the New Orleans Police Department, and whose recent studies on homicides have been widely cited. Meanwhile, each year the Bureau of Justice Statistics releases a National Criminal Victimization Survey, a self-reported survey that estimates the rate people experience certain crimes; it showed nonfatal violence decreasing in 2020 and increasing slightly in 2021.

“In general, the political discussions usually aren’t paying too close attention to what the data actually says.”

Voters can still look to their city’s police departments for local trends, but without stronger FBI data, it’s pretty tough to understand the bigger picture. And we may have to live with that uncertainty for a couple of years, while agencies attempt to convert to the newer reporting system—all at a time when the demands for police reform, coupled with the earlier rise in homicides, mean that voters and policymakers want their hands on top-notch crime data now. It’s “very unfortunate timing,” Princeton University criminologist Jacob Kaplan told the Marshall Project of the incomplete FBI data this year.

Ahead of the midterms, it’s particularly dangerous: “In general, the political discussions usually aren’t paying too close attention to what the data actually says,” says Asher, the AH Datalytics co-founder. “This [incomplete FBI data] is harmful in that it makes it even harder to more accurately understand and counteract misinformation in terms of crime trends.”

As candidates on both sides of the aisle pump out ads about public safety, it’s worth keeping in mind the older data that we do have: Yes, killings rose significantly in 2020, in red and blue states alike, but even then, the murder rate was far lower than in the 1990s, and overall crime decreased. And just because it’s harder to fact-check the ads this year, that doesn’t mean it’s impossible to catch candidates in their lies. That gruesome ad from New York, showing pedestrians being shot at in the streets? Well, the state’s Republican gubernatorial candidate, Zeldin, recently admitted that half of its crime footage was filmed before his opponent, Gov. Hochul, even took office—and that one clip in the original version of the ad wasn’t even from New York, but had been filmed all the way across the country in Oakland, California.