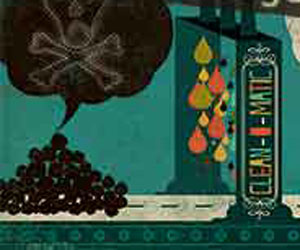 The commercial begins with a voice-over asking, “What do you think cars will be running on in the future?”

“Hydrogen fuel cells,” says a gray-haired hippie lady standing with her bike by a city park.

“Give me a solar car—I’m there,” declares a sporty young man.

“We need to be really cautious of what we’re putting into our cars,” explains a slacker dude. “What we’re doing is really messing things up. We need to make that change.” As portentous music swells, an animated sun blooms into a yellow and green flower.

The lovely sentiment is brought to you by BP, which since 2000 has touted its “Beyond Petroleum” identity with a multimillion-dollar ad campaign as well as a pledge to spend $8 billion on “alternative energy” by 2015. But the reality is a bit more complex than the commercials suggest. Of the $3 billion the company will spend for 2006-2008, only about half is going toward wind and solar, with the rest dedicated to more dubious alternatives like synthetic gas made from petroleum. By comparison, in 2006 alone, BP’s capital expenditures on oil and gas exploration, production, refining, and marketing came to $16.2 billion; its revenues were $274 billion, and its profits $22 billion.

BP may be the most audacious practitioner of fossil greenwashing, but it is hardly the only one. Shell has invested big in such environmentally devastating ventures as the Canadian tar sands and liquefied natural gas while making only modest forays into wind energy, solar, and hydrogen fuel cells—a total investment of about $1 billion as of 2006. Meanwhile, Americans for Balanced Energy Choices, an industry-funded coal advocacy group, has been running ads with slogans like “Our commitment goes beyond clean.” And in 2005, GE announced its “ecomagination” campaign, which included a TV commercial featuring buff, sweaty models posing as coal miners and the voice-over, “Harnessing the power of coal is looking more beautiful every day.”

Across the board, the companies that control fossil fuels have begun to respond to rising concern about global warming with what amounts to a three-point strategy: First, make small overtures toward developing renewable energy, and milk them for maximum PR value. Second, invest more generously in carbon-based “alternative energy” that gets passed off as green. Third, invoke the goal of energy independence to pump, mine, transport, and sell more and more of the same old fuels to an ever-hungrier market.

One of the slipperiest tactics involves redefining what constitutes clean energy. In a 2006 report, the oil-industry-friendly Institute for Energy Research said that U.S. oil and gas companies had invested $98 billion in “emerging energy technologies” in North America from 2000 to 2005. But the vast majority of this funding went to develop “frontier hydrocarbons”—new, often filthy methods of producing more oil and gas. In fact, a report from the Center for American Progress found that between 2001 and 2007, a period of unprecedented profits, the top five private oil companies spent an average of just one-half of one percent of total profits on renewable fuels. (BP and Shell topped the list at 1.2 percent; ExxonMobil occupied the bottom at 0.)

From Big Fuel’s point of view, the logic makes sense: Energy generated by the sun, wind, and tides is not a tangible commodity in the same way that oil, gas, and coal are; thus, a better way to preserve control of the market is to tap frontier or speculative resources, such as drilling farther offshore and in protected areas like the Arctic National Wildlife Refuge.

Perhaps the greatest beneficiary of industry’s “alternative” efforts is coal, America’s most abundant fossil fuel. There are about 600 coal-fired power plants around the country providing nearly 50 percent of our electricity. But since 2006, at least three dozen of the 153 new conventional coal plants planned for the coming decade have been canceled due to resistance from citizens and state and local governments.

In response, energy companies—often in joint ventures involving coal, oil and gas, electric, and mining interests—have launched schemes to turn coal into gas or liquid fuel, sometimes called syngas, synoil, or “clean coal.” Minnesota’s Excelsior En­ergy has partnered with ConocoPhillips on a coal-gasification project. Chevron owns coal mines in Wyoming, New Mexico, and Alabama, and has developed a coal conversion technology business, which it sold to GE in 2004. GE, in turn, has licensed the technology to companies including dkrw Energy out of Houston, which is developing one of the nation’s first coal-to-liquid plants in Wyoming. Last May, BP announced a joint venture with mining giant Rio Tinto to produce hydrogen energy using natural gas and gasified coal in the Powder River Basin, where Rio Tinto has three coal mines.

Coal gasification involves using heat and pressure to convert coal into gaseous components; so far, three syngas plants are operating in the United States commercially, and many more are in development. The coal-to-liquid (ctl) process known as Fischer-Tropsch, which turns coal into synthetic diesel fuel, was developed in the 1920s by German chemists; it powered the Nazi army in World War II and South Africa during the apartheid era. But other than some brief overtures toward ctl during the oil crisis of the 1970s, the process has never been developed in the United States—until now.

In theory, these technologies produce lower levels of particulate matter and acid-rain-producing sulfur and nitrogen compounds than burning the coal directly. But on the carbon front, they fail miserably: Syngas plants produce more CO2 than natural gas plants, and ctl produces more than twice as much per gallon of fuel as oil does.

To solve this problem, companies say they will employ carbon sequestration or carbon capture and storage (ccs), in which the CO2 emissions are stored, usually deep underground, rather than released into the atmosphere. The Intergovernmental Panel on Climate Change has said that ccs could reduce CO2 emissions from a plant by 80 to 90 percent; on the other hand, it also could increase a plant’s energy requirements by anywhere from 10 to 40 percent, and the overall cost of generating energy from 25 to 125 percent.

In addition to being difficult and expensive, ccs is potentially dangerous: In 1986, an eruption of CO2 from a naturally occurring pocket under a Cameroon lake bed instantly suffocated nearly 1,800 people; leaks from an underground storage site could be likewise deadly. “That stuff is crazy,” says Tyson Slocum, who heads Public Citizen’s energy project. “Totally unproven. Stuffing hundreds of millions of tons of carbon dioxide into the ground—there are huge liabilities.”

For this reason, Slocum says, energy companies are pushing to transfer as much legal and financial responsibility as possible to the federal government. Last April industry lawyer Kipp Coddington of Alston & Bird testified before a Senate committee that if the industry was going to invest billions of dollars in carbon sequestration, the related risks had to be “identified, quantified, and minimized.” As Slocum puts it, “Once underground, [the CO2] becomes the responsibility of the American people.”

Small-scale carbon sequestration has been carried out primarily by pumping CO2 into depleted oil wells, which serves the additional purpose of forcing more oil to the surface. But no power plant is yet operating with a full ccs system. The much-publicized FutureGen facility—a U.S. government-funded, coal-fueled plant that was supposed to achieve zero emissions through ccs—was canceled in January 2008, five years after it was announced. (The Department of Energy cited cost overruns and said it intended to fund several smaller plants instead.)

Peter Montague, director of the Environmental Research Foundation, has noted that the coal, oil, gas, and mining industries, as well as electric utilities, “are eager to get carbon sequestration going” because it will benefit them all by “removing the need for substantial innovation and reducing competition from renewable fuels.” But for the coal industry, he writes, ccs may be the key to survival—not because it is actually a viable solution to coal’s vast environmental problems, but because it seems like one.

Energy companies have made it abundantly clear that any forward movement on ccs, as well as other clean-coal technology, depends on the government’s shouldering a good share of the expense. They got a fair bit of what they wanted in last year’s energy bill, which jettisoned key measures to support solar and wind power (including a requirement that utilities move toward generating 15 percent of their power from renewables) but set aside billions for research into CO2 sequestration. The subsidies come on top of an even larger set of handouts found in the Energy Policy Act of 2005, which included some $4 billion in direct grants, loan guarantees, and tax incentives for gasification and other clean-coal initiatives.

And the push is likely to continue—at the state level, as well as in Washington. Last year in Kentucky, the governor signed a bill to provide a subsidiary of Peabody Energy, the world’s largest coal company, with $250 million in tax breaks and other incentives to build a coal-gasification plant. In Wyoming, the legislature put through an exemption on the sales tax for synthetic fuel made from coal and has pursued a public-private partnership to develop it. Legislators are also looking at a new category of below-ground rights, which could provide a free, publicly controlled zone for storing sequestered carbon. Says Bill Bensel, an organizer with Wyoming’s Powder River Basin Resource Council, “We’re just trying to show we can be as green as we can, so we can sell more coal.”