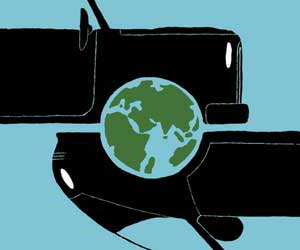 thom davis had a seemingly simple goal: to buy a reliable car while shrinking his carbon footprint. A professor of geology and climatology at Bentley University outside Boston, Davis was looking to replace his beloved 1988 Saab sedan. He found a 1997 model on Craigslist, but it averaged 25 miles per gallon—better than the national average of 22 mpg, but not close to the 30 mpg that the typical new car gets. So he considered splurging on a brand-new, $24,000, 46-mpg Toyota Prius.

Being a science and numbers guy, Davis decided to calculate whether putting a new hybrid on the road really was the greener choice. You might guess the punch line. “My research overwhelmingly indicated that the used Saab would have an overall lower carbon footprint,” he reports. Here’s why: Davis assumed that he would own his next car for five years and drive it 48,000 miles. Clearly, the Prius won the mileage battle hands down. But once he figured in the energy used to manufacture the hybrid, he found that the ’97 Saab required less energy overall—about 14 million BTU less, enough to power a fridge for nine years. And less energy, of course, means less carbon.

But wait—it’s not as simple as used car good, new Prius bad. Davis’ answer would have been different if, say, he planned to keep his next car for 10 years. Or if he planned to drive more. And so on. “It’s all a matter of what assumptions you use,” says Pablo Päster, the vice president of greenhouse gas management innovations for ClimateCheck, whose data Davis used in his calculations.

Another tricky question is who bears the CO2 burden of building the car in the first place. “Is the first owner of a new vehicle fully responsible for emissions for manufacturing that car? Or is the company that manufactured it responsible? Or should those emissions be divided out among each year of the car’s life?” asks Päster. Davis assumed that he wasn’t responsible for the newer used Saab’s initial carbon debt since someone else had originally bought it. He gave himself credit for reusing the car—logic that holds up only if buying the used Saab would somehow take a new car off the assembly line. And who was responsible for Davis’ old Saab, which would stay on the road unless it was recycled for scrap? (When he does his own calculations, Päster slyly avoids saying who should bear these burdens—leaving the decision of how to split the carbon bill up to you.)

So how are we nonengineers supposed to know when to junk our old car without guilt? By Päster’s numbers, building an average midsize car in 2007 emitted 18,000 pounds of CO2—about the same as burning 900 gallons of gas. He won’t commit to exact numbers, but he does have a rule of thumb: If your jalopy is moderately efficient (i.e., gets better than 25 mpg) and you don’t drive it much, keeping it is better than buying a new car. “But if you have an old car with pretty lousy fuel economy,” he says, “then you’re better off getting a new car because the emissions from making a new car are really not that big compared to the emissions from using the car.”

If you want to see if it makes more environmental sense to buy a used car instead of a new one, check out AskPablo.org for more info on Päster’s carbon comparisons. The numerically inclined can crunch their own numbers: Download the Department of Energy’s vehicle modeling software at ANL.gov.

And when you do the math, don’t disregard the importance of another limited resource—money. Thom Davis can attest to that. After buying the used Saab, he got stuck with four brake jobs in his first 5,000 miles. The $18,000 he saved by not splurging on the Prius sure came in handy.