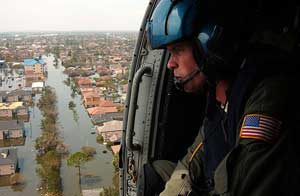 Confronted with images of corpses floating in the blackened floodwaters or baking in the sun on abandoned highways, there aren’t too many people left who see what happened following Hurricane Katrina as a purely “natural” disaster. The dominant narratives that have emerged, in the four years since the storm, are of a gross human tragedy, compounded by social inequities and government ineptitude—a crisis subsequently exploited in every way possible for political and financial gain.

But there’s an even harsher truth, one some New Orleans residents learned in the very first days but which is only beginning to become clear to the rest of us: What took place in this devastated American city was no less than a war, in which victims whose only crimes were poverty and blackness were treated as enemies of the state.

It started immediately after the storm and flood hit, when civilian aid was scarce—but private security forces already had boots on the ground. Some, like Blackwater (which has since redubbed itself Xe), were under federal contract, while a host of others answered to wealthy residents and businessmen who had departed well before Katrina and needed help protecting their property from the suffering masses left behind. According Jeremy Scahill’s reporting in The Nation, Blackwater set up an HQ in downtown New Orleans. Armed as they would be in Iraq, with automatic rifles, guns strapped to legs, and pockets overflowing with ammo, Blackwater contractors drove around in SUVs and unmarked cars with no license plates.

“When asked what authority they were operating under,” Scahill reported, “one guy said, ‘We’re on contract with the Department of Homeland Security.’ Then, pointing to one of his comrades, he said, ‘He was even deputized by the governor of the state of Louisiana. We can make arrests and use lethal force if we deem it necessary.’ The man then held up the gold Louisiana law enforcement badge he wore around his neck.”

The Blackwater operators described their mission in New Orleans as “securing neighborhoods,” as if they were talking about Sadr City. When National Guard troops descended on the city, the Army Times described their role as fighting “the insurgency in the city.” Brigadier Gen. Gary Jones, who commanded the Louisiana National Guard’s Joint Task Force, told the paper, “This place is going to look like Little Somalia. We’re going to go out and take this city back. This will be a combat operation to get this city under control.”

Ten days after the storm, the New York Times reported that although the city was calm with no signs of looting (though it acknowledged this had taken place previously), “New Orleans has turned into an armed camp, patrolled by thousands of local, state, and federal law enforcement officers, as well as National Guard troops and active-duty soldiers.” The local police superintendent ordered all weapons, including legally registered firearms, confiscated from civilians. But as the Times noted, that order didn’t “apply to hundreds of security guards hired by businesses and some wealthy individuals to protect property…[who] openly carry M-16’s and other assault rifles.” Scahill spoke to Michael Montgomery, the chief of security for one wealthy businessman who said his men came under fire from “black gangbangers” near the Ninth Ward. Armed with AR-15s and Glocks, Montgomery and his men “unleashed a barrage of bullets in the general direction of the alleged shooters on the overpass. ‘After that, all I heard was moaning and screaming, and the shooting stopped. That was it. Enough said.'”

Malik Rahim, a Vietnam veteran and longtime community activist, was one of the organizers of the Common Ground Collective, which quickly began dispensing basic aid and medical care in the first days after the hurricane. But far from aiding the relief workers, Rahim told me this week, the police and troops who began patrolling the streets treated them as criminals or “insurgents.” African American men caught outside also ran the risk of crossing paths with roving vigilante patrols who shot at will, he says. In this dangerous environment, Common Ground began to rely on white volunteers to move through a city that had simply become too perilous for blacks.

In July, the local television station WDSU released a home video, taken shortly after the storm hit, of a local man, Paul Gleason, who bragged to two police officers about shooting looters in the Algiers section of New Orleans.

“Did you have any problems with looters,” [sic] asked an officer.

The officer asked, “What happened?”

“We shot them,” said Gleason.

“How many did you shoot?

“Thirty-eight people? What did you do with the bodies?”

“We gave them to the Coast Guard,” said Gleason.

Gleason told his story with a cup of red wine in one hand and riding a tractor from Blaine Kern’s Mardi Gras World.

Although the government’s aid efforts were in chaos, those involved in the self-generated community rescue and relief efforts were often seen as a threat. Even so, Common Ground, founded in the days after Katrina hit, eventually managed to serve more than half a million people, operating feeding stations, opening free health and legal clinics, and later rebuilding homes and planting trees. But they “never got a dime” from the federal government, says Rahim. The feds did, however, recruit one of Common Ground’s founders, Brandon Darby, as an informant, later using him to infiltrate groups planning actions at the 2008 Republican National Convention.

And while the government couldn’t seem to keep people from dying on rooftops or abandoned highways, it wasted no time building a temporary jail in New Orleans.
Burl Cain, the warden of the notorious Angola Prison, a former slave plantation that’s now home to 5,000 inmates, was rushed down to the city to oversee “Camp Greyhound” in the city’s bus terminal. According to the New Orleans Times-Picayune, the jail “was constructed by inmates from Angola and Dixon state prisons and was outfitted with everything a stranded law enforcer could want, including top-of-the-line recreational vehicles to live in and electrical power, courtesy of a yellow Amtrak locomotive. There are computers to check suspects’ backgrounds and a mug shot station—complete with heights marked in black on the wall that serves as the backdrop.”

In the virtual martial law imposed in New Orleans after Katrina, the war on the poor sometimes even spilled over into the war on terror. In his latest book Zeitoun, published in July, Dave Eggers tells the story of a local Syrian immigrant who stayed in New Orleans to protect his properties and ended up organizing makeshift relief efforts and rescuing people in a canoe. He continued right up until he was arrested by a group of unidentified, heavily armed men in uniform, thrown into Camp Greyhound, and questioned as a suspected terrorist. In an interview with Salon, Eggers said:

Zeitoun was among thousands of people who were doing “Katrina time” after the storm. There was a complete suspension of all legal processes and there were no hearings, no courts for months and months and not enough folks in the judicial system really seemed all that concerned about it. Some human-rights activists and some attorneys, but otherwise it seemed to be the cost of doing business. It really could have only happened at that time; 2005 was just the exact meeting place of the Bush-era philosophy towards law enforcement and incarceration, their philosophy toward habeas corpus and their neglect and indifference to the plight of New Orleanians.

Through all the time that the federal and local governments, in concert with wealthy New Orleanians, were pitching their battle, there was virtually no one fighting on the other side. Reviewing the “available evidence” a month after Katrina, the New York Times concluded that “the most alarming stories that coursed through the city appear to be little more than figments of frightened imaginations.” The reports of residents firing at National Guard helicopters, of tourists being robbed and raped on Bourbon Street, and of murderous rampages in the Superdome—all turned out to be false.

Since then it has become increasingly clear that the truth of what happened in New Orleans—vigilantism and racially tinged violence, a military response that supplanted a humanitarian one—is equally sinister.